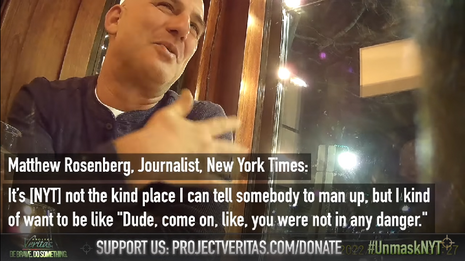 A couple of undercover videos released by Project Veritas featuring New York Times national security correspondent Matthew Rosenberg has caused quite a stir at that newspaper because Rosenberg had some very critical things to say about his colleagues, specifically what he considers to be their silly drama queen overreactions to the January 6 events at Capitol Hill.

The conundrum of the Times is that even though Rosenberg's criticisms caused a lot of outrage among much of their staff, executive editor Dean Baquet urged the staff at a meeting of their Washington D.C. bureau on Thursday to keep calm and not allow Project Veritas the satisfaction of seeing their "heads explode."

The problem for Baquet is that news of that meeting leaked to Politico which in its Friday Playbook revealed that at the New York Times heads did in fact explode over what Rosenberg said in the Project Veritas videos such as the first one below.

Project Veritas, a group that has singled out journalists and Democrats in undercover operations, posted a pair of videos this week showing Rosenberg divulging details about sensitive newsroom dynamics and disparaging his colleagues. Rosenberg suggested that the media was overhyping the siege on the Capitol on Jan. 6, scoffing at colleagues who were there that day who said they were traumatized, and blasted what he called left-leaning younger Times reporters wrapped up in a “woke” culture influencing coverage.

The videos immediately caused tensions to flare among Times staff, according to more than a half-dozen reporters who were granted anonymity to speak candidly. During the Thursday lunch, multiple reporters said they were upset about Rosenberg dissing their own coverage and badmouthing his coworkers.

Baquet, the Times staffers told us, responded by criticizing Rosenberg for being careless and stupid. But he said that Project Veritas is trying to “make our heads explode” and divide the Times, and that they should not play into the group’s hands.

Nothing says exploding heads and playing into the hands of Project Veritas like New York Times staffers leaking to Politico that Dean Baquet complained that Project Veritas was trying to make their heads explode.

While some reporters told us that management needs to address this issue or even want to see Rosenberg punished, there’s deep concern about fueling Project Veritas’ work.

The group has used hidden cameras and/or false identities in an attempt to catch members of the media or Democrats saying embarrassing things. It has recently singled out New York Times reporters who have written about the group’s tactics as well as an ongoing Justice Department investigation over how the group obtained Biden’s daughter ASHLEY’s diary.

Those reporters include ADAM GOLDMAN, MICHAEL SCHMIDT and MARK MAZZETTI.

Many at the Times — even those unhappy with Rosenberg — view the latest Project Veritas hit as an attempt at intimidation. And they’re loath to be seen as reacting to such tactics, which they say have crossed a line into harassment.