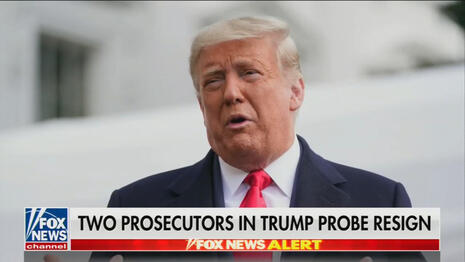 Vox senior politics correspondent Andrew Prokop is rather upset. Why? Because as he wrote, "Donald Trump may be about to escape legal peril yet again."

Prokop explains in more detail the reasons for being bummed out about Trump possibly escaping "legal peril again" on Wednesday in "New York investigation into Trump’s business looks imperiled after prosecutors quit."

A long-running investigation into Trump’s business practices from the Manhattan district attorney’s office appears to have been derailed, as the two lead prosecutors, Carey Dunne and Mark Pomerantz, resigned Wednesday. A New York Times report suggests they did so because the new district attorney, Alvin Bragg, told them “he had doubts about moving forward with a case” against Trump.

The big question is why. Did Bragg legitimately conclude that the case against Trump, which he inherited from former district attorney Cyrus Vance, was weak?

Or did he get cold feet about taking on the powerful former president?

A liberal DA who gets cold feet taking on Trump in liberal Manhattan? The possibility of that ranges somewhere between nil and none.

Prokop then gives us two reasons as to Bragg's hesitancy to pursue the case against Trump. One possibility is absolutely absurd and the other is completely rational yet somehow Prokop can't decide which of the two is more valid:

So what happened here? It’s impossible to say without getting a clearer idea of the evidence prosecutors amassed, but there are two main possibilities.

First is the possibility Trump critics fear — that Bragg is killing a strong investigation for his own reasons, whether those reasons may be fear of taking on the powerful, philosophical skepticism of aggressive prosecutions, or something else. However, it is worth noting that Bragg’s reelection interest in deeply liberal Manhattan would likely be served by aggressively prosecuting Trump, so if anything, this hurts his political future.

Second is the possibility that Bragg is killing a weak investigation. There have long been doubts about the case Vance’s team was trying to build. The indictment of Weisselberg and the Trump Organization was rather unusual: neglecting to pay taxes on fringe benefits is a criminal act, but it is rarely enforced so aggressively. As mentioned, Trump’s knowledge would be hard to prove without a high-level cooperator. Still, the prosecutors who quit clearly believed in their case.

Completely absurd reason number one versus highly likely number reason two. What does Prokop do? He splits the difference:

The truth could also lie in the middle — the case might not be definitively weak or strong but rather somewhere in between. So this could just be a genuine difference of opinion about the case, with no nefarious behavior necessary.

Or since reason number one is ridiculous that means the truth lies almost entirely in reason number two which is something that Prokop has trouble accepting since that would mean that Orange Man Bad is probably as guilty of the New York charges as he was in the discredited Trump-Russia collusion conspiracy theory. And poor Prokop just can't let go which is why he lends equal weight to his sheer fantasy reason number one.