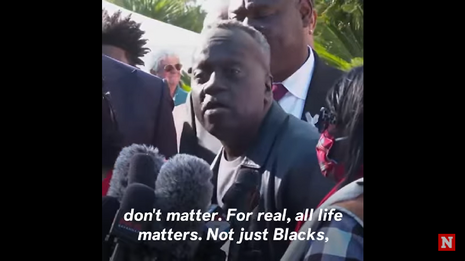 We live in such a bizarro world that such a statement is now considered absolutely taboo to express. That was probably the reason why when the father of Ahmaud Arbery, following the jury verdicts in his son's murder, stated "all lives matter" with Al Sharpton hovering over his shoulder as witness, it had to be quickly dealt with. And the way Newsweek handled the "heresy" of Marcus Arbery was to absurdly claim that we really didn't hear him say what we plainly heard him say.

On Wednesday, Newsweek reporter Khalida Rahman tried to rewrite history by proclaiming that "No, Ahmaud Arbery's Father Did Not Say 'All Lives Matter'."

Outside a Georgia courthouse on Wednesday, the father of Ahmaud Arbery spoke to the press after three men were convicted of murdering his son.

Some outlets and reporters have misquoted Marcus Arbery Sr., however, suggesting he used a controversial slogan that is associated with criticism of the Black Lives Matter movement.

What he actually said was "all life matter" as he spoke about not wanting another family to lose a child the way he had lost his son.

"All life matter?" Besides not being grammatically correct (it should be "All life matters") it is also a distinction without a difference. However, the people who claimed to have heard Marcus Arbery say "all lives matter" were correct despite the desperately absurd explanation from Rahman. Even on the Newsweek YouTube video of Marcus Arbery speaking they made sure to use the text "all life matters" (which is grammatically correct but contrary to the Newsweek article version) when he was actually saying "all lives matter."

However, this ridiculous rewrite of history is not limited to Newsweek. It turn out that YouTube is complicit as well. When you  click the "Open Transcript" for this video, at the 1:03 mark they have Arbery saying "for real old mountain hold on." Nothing even close to resembling "all lives matter" appears. Similarly, other YouTube videos of Marcus Arbery saying "all lives matter" where a transcript is available either has word jumbles as on the Newsweek video or just skips that section altogether in their transcripts.

Since the transcripts are AI generated, it must have taken human intervention to send "all lives matter" down the YouTube transcript memory hole. This begs the question that if YouTube intervened on altering the statement of Marcus Arbery's statement, how many other transcripts have also been altered when presented with inconvenient statements that counter the approved narrative?