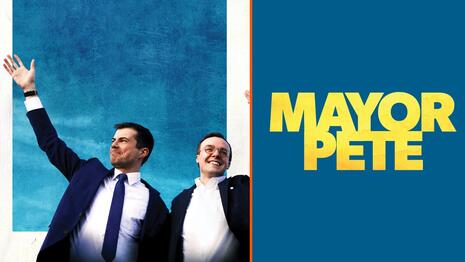 You would think that the mostly MIA Transportation Secretary Pete Buttigieg would find friendly ground at the liberal Politico but apparently his incredibly insular boring personality is so off-putting that even that periodical is unable to display much enthusiasm about the soon to be released "Mayor Pete" documentary. You don't even need to read very far to find the harsh assessment of reviewer Ruby Cramer since it is shouted out in the title of Monday's review, "‘He’s Comin’ Across Like the F---ing Tin Man Up There’."

Even the director and producer of the documentary, Jesse Moss, found his subject to be a rather elusive character:

Now a feature film by Moss, director of the 2020 film “Boys State,” aims to fill the lingering curiosity gap about a candidate who has shaped his own unexpected political identity, first in South Bend, Ind., and now in Washington. But peeling back the layers, Moss found, could feel like an impossibly frustrating task.

He does not, by his own admission, have the “gregarious charisma” of Bill Clinton. You can sense there is constant activity happening, not on screen, but somewhere inside his head, far off and out of reach. At points, Moss says, he felt confounded by his own subject, turning to Chasten to bring Buttigieg emotionally within arm’s length.

“I was very stymied by that,” Moss told me ahead of the film’s release this Friday. “There were moments where I threw up my hands in frustration and despair.”

And that’s the underside of Moss’s premise, the dilemma in his film on constant display: It’s not exactly that Buttigieg is “bullshitting” us, as Chasten says in the first scene, or even that what you see is not, in fact, what you get. It’s the feeling of an inaccessible interior — of watching a person who is still becoming comfortable with himself and doing so on the biggest stage imaginable. The real drama that unfolds on screen is not about the ups and downs of a campaign, or even Buttigieg’s political prospects, though he states plainly in the film’s final scene that he could run again: “Time is on my side.” What you see instead is more basic: a story about personal identity in politics — a man, then 37, a presidential candidate, a breakout star, now the most prominent member of President Biden’s cabinet, who at every turn was unsure of how, or exactly how much, to share himself with the world. Always, he erred on the side of less rather than more. Always, it was against the urging of his own husband and campaign team.

However, it is hard to feel much sympathy for Moss trying to document a rather boring person in a way that might be interesting for audiences since he purposely whitewashed a rather controversial incident during Buttigieg's presidential campaign:

There are notable absences in the film, too. Moss documents Buttigieg’s struggle with the police shooting of Eric Logan, a Black man in South Bend, but the film leaves out the tensions over race and inclusion that divided his own campaign staff. (Rather, Moss presents the operation as a small, home-grown family, where aides are expected to “be really, really kind,” as campaign manager Mike Schmuhl tells staff early in the film.)

And if the documentary does not convince you that Buttigieg is a self-controlling robot, then this experience of the reviewer revealing the first time she encountered the future helpless bystander of the current supply chain crises will probably change your mind.

The first time I met Buttigieg was at a Sheraton in Phoenix in January 2017. He was still mayor of South Bend, a city of 100,000, a new entry in the race to become chair of the Democratic National Committee, his first introduction to the national stage. As an aide led me up to his suite, she told me he was “the next John F. Kennedy.”

This being a DNC candidate forum, an unglamorous and musty affair, it was quite the claim. Inside the room, I asked Buttigieg about how he wanted to lead the party, and he quickly steered us into a conversation about what it means to lead a city with “values” — specifically, he said, the values of trash pickup services.

"The values of trash pickup?" I said.

“Yeah. It’s connected to the meaning of life, in the sense that whatever the meaning life is —”

"Yeah,” he said, “because what's the meaning of life for you?"

“Whatever it is, whether it’s your professional growth, or faith and family, or you’re building a business, you will not be able to meet that life of your choosing if there’s not clean, safe drinking water for you, or a road to get you where you’re going — or if the trash isn’t getting picked up.”

Somehow it is hard to think of the original John F. Kennedy carrying on such an absurd conversation that sounds like campaign talking points rhetoric as regurgitated by a computer programmed to imitate a concerned sentient being.

If you want to avoid a sense of deep sadness from time utterly wasted it seems you should place "Tin Man" aka "Mayor Pete" on your Must Miss list.