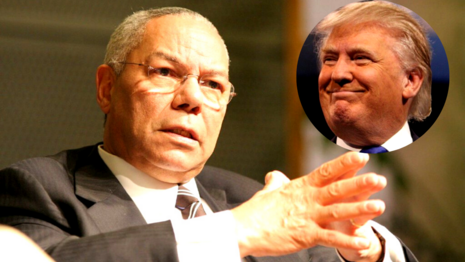 Most of us would like to remain in this world as long as possible but when we inevitably shuffle off this mortal coil, CNN's Chris Cillizza might be the last person you would want to write your obituary. Why? Because there is a strong chance you would be relegated almost to a sideshow in the remembrance.

Such was the case with Colin Powell, who passed away on Monday.  He was a diplomat, a statesman, and a four-star general as well as the first African-American Secretary of State. However, in Cillizza's account on Monday, "The Colin Powell Republican no longer exists in the Republican Party," this was all shoved to the side in order for CNN Man to indulge in his obsession with Trump, Trump, and even more Trump.

The first Donald Trump outburst by Cillizza begins just four paragraphs down followed by a landslide of obsessive references to the Big Bad Orange Man.

Powell's personal journey from potential -- and much-coveted -- Republican presidential candidate in the mid-1990s to pariah within the Trump-ified GOP tells the story of how the party went from one that recognized the changing face of America and the need to adapt its policies as a result to one organized around the often-intolerant views of a single man who, it's worth noting, spent less time as a Republican than Powell did.

Even though Powell declined to support two establishment Republicans, John McCain and Mitt Romney, in order to cast his lot and vote with Barack Obama for the presidency long before Trump arrived on the political scene, Cillizza focuses on him as somehow being the "final straw" despite that straw having been broken years earlier for Powell.

The rise of Donald Trump in 2016 -- a man who aggressively positioned himself against the very establishment figures that Powell modeled his version of the GOP after -- wound up being the final straw for the retired general.

Powell called Trump a "national disgrace," and an "international pariah" -- insisting that the billionaire businessman was leading a "racist" movement in hacked personal emails revealed in September 2016. In late October of that year, Powell revealed that he would be voting for Hillary Clinton.

In June 2020, Powell said he would be voting for Joe Biden for president. "I certainly cannot in any way support President Trump this year," he told CNN's Jake Tapper.

Trump, never one to overlook a slight, shot back at Powell with this: "Colin Powell, a real stiff who was very responsible for getting us into the disastrous Middle East Wars, just announced he will be voting for another stiff, Sleepy Joe Biden. Didn't Powell say that Iraq had 'weapons of mass destruction?' They didn't, but off we went to WAR!"

Whew! That's a lot of Trump in a column supposedly about the passing of Powell. But wait...THERE'S MORE!

The very next day Cillizza wrote a sequel in which his Trump obsession  relegated Powell to an even smaller role to the point where he wasn't even mentioned in the title, "Donald Trump (yet again) proves there's no bottom." This time Powell was diminished to the extent that his name only appeared eight times to Trump's eleven obsessive mentions including the title.