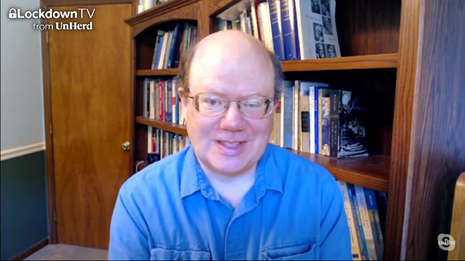 Wikipedia co-founder Larry Sanger is warning that the online encyclopedia is nothing like it used to be, when it used to aspire to neutrality. Now it easily comes up in Google searches of everything, and so it can't be ignored by powerful people.

In an interview with Lockdown TV, Sanger said “Wikipedia is known, now, by everyone to have a lot of influence in the world … so there is a very big, nasty, complex game being played behind the scenes to make the articles say what somebody wants them to say.”

He said although Wikipedia attempted to be neutral in its early years, it has now been weaponized as a propaganda tool for the leftist establishment, including the president. "The Biden article, if you look at it, has very little by way of the concerns that Republicans have had about him. So if you want to have anything remotely resembling the Republican point of view about Biden, you’re not going to get it from the article."

Sanger said Wikipedia is now just another method of spreading the viewpoint of liberal media outlets, and downplaying conservative media.

They're simply, by their policies, not totally restricted to secondary sources by that is what they emphasize. They emphasize not the primary sources for information. They don't look up tables of statistics and draw their own conclusions. They want to cite articles by journalists who have looked at those tables of statistics. And not all journalism. The Daily Mail is out. You can’t cite the Daily Mail at all. You can’t cite Fox News on socio-political issues either. It’s banned. So what does that mean? It means that if a controversy does not appear in the mainstream center-Left media, then it’s not going to appear on Wikipedia.

Conservative journalists need not apply to give their input to Wikipedia.

One example cited by Sanger as to the extreme bias of Wikipedia is their coverage of Covid-19:

If you look at the articles that Wikipedia has, you can just see how they are simply mouthing the view of the World Economic Council or World Economic Forum, and the World Health Organization, the CDC and various other establishment mouthpieces like Fauci — they take their cues from them…There’s a global enforcement of a certain point of view, which is amazing to me amazing to a libertarian, or a liberty-loving conservative.

As if to reinforce Sanger's points about Wikipedia bias, C/Net on June 27 noted that "Wikipedia is at war over the coronavirus lab leak theory."

In recent weeks, increasing press coverage from the likes of The New York Times, The Wall Street Journal and The Washington Post has seen the lab leak hypothesis endlessly debated on social media, talk radio and primetime TV. It's become unavoidable.

The words "lab leak" aren't mentioned anywhere. To find them, you have to know where to look: the "Talk" page. The Talk page is like a collaborative Google Doc, a place where the legion of volunteer editors can raise queries and kick around new ideas on how articles might be improved. Even veteran Wikipedia users might not notice the small tab at the top left of every article that takes you behind the curtain.

Finally, Sanger warns of the dangers posed by Social Media in general:

We trusted outlets like Facebook and Twitter and YouTube with our data, and allowed them essentially to take over the media world. What we trusted them with was our liberty and our privacy, that basically that they weren’t going to shut us down. But they stabbed us in the back, essentially.