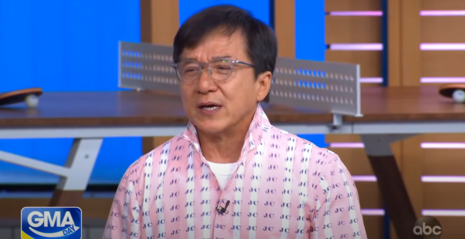 Chan, with an obvious eye on the vast Chinese movie market, made his declaration as reported by the Sunday Global Times, a mouthpiece for the CCP, in "Jackie Chan expresses willingness to join CPC."

Hong Kong action movie superstar Jackie Chan said he wanted to join the Communist Party of China (CPC) at a recent forum in Beijing, a comment that experts said reflected Hong Kong elites' increasingly objective and rational understanding of the CPC amid the city's reflection on its position and search for its future development.

The threat of losing access to the vast Chinese movie market seems to be an incentive for Jackie to get his mind right and follow the CCP dictates.

Chan joined a symposium on Thursday in Beijing, which invited Chinese film insiders to speak and share their thoughts regarding the keynote speech delivered by the top Chinese leader on July 1, the centennial of the founding of the CPC.

At the event, Chan, also the vice chairman of the China Film Association, not only expressed his proud feeling of being a Chinese, but also showed his longing for the CPC. "I can see the greatness of the CPC, and it will deliver what it says, and what it promises in less than 100 years, but only a few decades," Chan said.

Also, he remarked that "I want to become a CPC member."

Perhaps Jackie Chan has a competitive thing going on and he wanted to beat out John Cena in the art of embarrassing self-degradation.

We now conclude with a final bit of blatant propaganda from Jackie Chan's CCP masters:

Whether it is the Hong Kong regional government, society or individuals, they should correct their one-sided, outdated and wrong understanding of the CPC over the past few decades, and reshape their perception of the Party and the country, Lau Siu-kai, deputy head of the Chinese Association of Hong Kong and Macao Studies, told the Global Times in a recent exclusive interview.