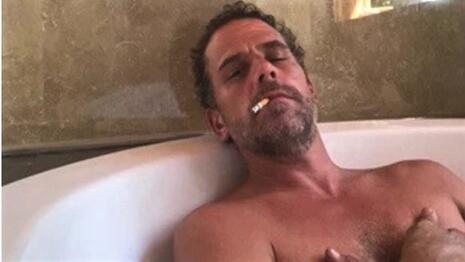 When you think about Hunter Biden, what is the first thing that comes to mind? And  please don't crack any jokes. Come on, pipe up. What do you associate Hunter Biden with? Laptops? Perhaps but it could be another L-word, namely locomotives.

Yes, did you now that Hunter Biden is a noted locomotive expert? You don't believe me? Well, that is how Politico's "Transition Playbook" described him on Friday in "How high speed trains got railroaded in Biden's infrastructure plan."

Welcome to POLITICO’s 2021 Transition Playbook, your guide to the first 100 days of the Biden administration

He has written that the Amtrak staff provided him with “another family entirely.” The Amtrak station in Wilmington, Del., is named after him. In 2006, his son, noted locomotive expert HUNTER BIDEN, joined Amtrak’s board — the Senate easily confirmed him by a voice vote.

So Hunter Biden is a "noted locomotive expert?" Does that mean that high speed rail conferences around the world are incomplete without the input of Hunter Biden, the "noted locomotive expert?" And how did Hunter gain such expertise on the subject to the extent to be on the board of Amtrak? Well, he did it by riding the choo-choo a lot. Really! That's how he described his expertise to Politico in 2007 (this new report linked to that as "proof" of expertise):

"As a frequent commuter, I have literally logged thousands of miles on Amtrak," Biden told the Senate Commerce Committee on his way to being unanimously confirmed for the board seat being vacated by another Democrat, former Massachusetts Gov. Michael Dukakis.

If you are a Democrat and Politico wants to make themselves laughingstocks again by sucking up to a high ranking political relative of yours, just go on a lot of cruises and you could be described as a noted nautical expert.