Sorry, Vanity Fair. We know you want to get eyeballs on your site but publishing a completely fake news headline is not the way to go.

Since Vanity Fair is no Babylon Bee it doesn't even have the excuse of pretending to be satire, especially since the article below the headline is dead serious. "LINDSEY GRAHAM: I’M WILLING TO OVERLOOK THE FACT THAT TRUMP HAS PROBABLY BEATEN A FEW HOMELESS PEOPLE TO DEATH."

Nowhere in the rather angry Tuesday article by Bess Levin is there even a hint of what is absurdly proclaimed in the headline.

In addition, the Axios On HBO video upon which she bases her story also has nothing about what Graham supposedly claimed in the fake news headline. She could only claim "Lindsey Graham, though, is not like most people, which is why he‘s apparently willing to overlook the fact that Donald Trump is a remorseless monster."

Okay, we get it, Bess. You really, really hate Trump. However, does that excuse Vanity Fair putting a fake news headline on your story? Here's the gist:

In an interview with Axios on HBO, Graham told Jonathan Swan: “Donald Trump was my friend before the riot and I’m trying to keep a relationship with him after the riot. I still consider him a friend. What happened was a dark day in American history and we’re going to move forward, so here’s what you need to know about me…I want this to continue. I want us to continue the policies that I think will make America strong. I believe the best way for the Republican Party to do that is with Trump not without Trump.” 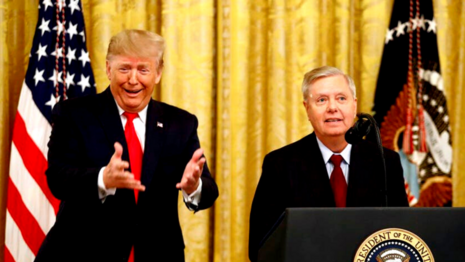 ...“What’s hard is to take a movement that I think is good for the country. Try to get the leader of the movement who has got lots of problems facing him and his party and see if we can make a go of it,” Graham said, sounding like someone rationalizing staying with their abuser.

“There’s something about Trump, there’s a dark side, and there’s some magic there. What I’m trying to do is just harness the magic. To me, Donald Trump is sort of a cross between Jesse Helms, Ronald Reagan, and P.T. Barnum. It’s just this bigger-than-life deal. He could make the Republican Party something that nobody else I know can make it. He can make it bigger. He can make it stronger. He can make it more diverse. And he also could destroy it.”

So where is the part where Graham stated, as claimed in the headline, that he is willing to overlook that Trump has probably beaten a few homeless people to death? Oh, it is not true? So Vanity Fair, by putting that in their headline, is guilty of... FAKE NEWS.

PS: Meanwhile, Bidenite Bess is also complaining that it's not true that the Biden dogs have been banished from the White House! She even quotes MSNBC host Tiffany Cross lamenting "No one bothered to get a quote from Major." The dog talks??