Anchor Ana Cabrera began by expressing disgust at the MAGA protests: "Ryan, the president's supporters, they have poured into the streets of Washington this weekend to try to give life to these unfounded and baseless claims of a rigged election. We literally had far right groups like the Proud Boys marching down Pennsylvania Avenue.This election is over. How did this become normal?"

Politico's Ryan Lizza replied it's "because the president has decided to delegitimize the crystal clear results of the election." Ham said the math for Trump doesn't look good, and then shamed the CNN double standards on recounts and protests:

MARY KATHARINE HAM: I'm happy to have them look at that in Georgia and I think possibly Wisconsin at this point. But math is not in his favor. He cannot overcome the mountain of votes for Joe Biden in many of these states that he would have to do to do this, and therefore the right thing to do is to say I think this is not going to happen and to graciously concede.

I'm comforted that it doesn't seem like Biden's transition is suffering because of this. And I think, look, if he has a strategy, the strategy might be a sort of contemporaneous example in Stacey Abrams because he sees there are great accolades and attention and appetite for somebody who does not concede an election as she did not in Georgia for the governorship for two years, and she has got feted by media and everybody.

So, he's looking around and saying, maybe that's the path for me. It is a bad path, and we should say that it is bad.

I also am not a huge fan of the game where we selectively shame one side or the other for exercising their political rights to free assembly, and to come together in the capital. We have seen it on the left and the right all year, and it is a tendency and a bad tendency, I think, to tell one side that that's bad and they're going to spread the virus, while the other one sort of gets a pass.

I don't -- the virus doesn't discriminate based on political viewpoint, and neither do I, and I don't think we should in general, with the giant caveat of be careful out there. But I do want to be careful not to discourage this sacrosanct right to gather and vent in these ways, because it's part of what makes our democracy healthy.

With their hypocrisy highlighted by Ham on how the media treated Abrams' perennial refusal to admit she lost to Trump's refusal to concede until after the legal challenges and ballot audits are completed, Cabrera and Lizza lamely attempted to say this is apples and oranges, because Trump is president and there's a pandemic, blah blah blah. Really lame.

CABRERA: I should note on the Stacey Abrams comparison, I mean, the reason that she was effective post her race is because she actually started, you know, a nonprofit to get out the vote, to really juice up the voter turnout to make sure people have a right to exercise. 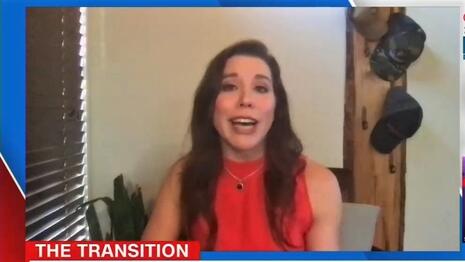 HAM: Hold on, but do we think if Trump did not concede, which would be, I think we can all agree, wrong, if he started an effective GOTV nonprofit that we would be giving him magazine covers and good coverage? No, I don't think that would be right, and it happens on the other side, and he sees that very clearly.

CABRERA: I don't think there's a total comparison there, but let's move on because I don't want to make this President Trump versus Stacey Abrams. Go ahead, Ryan, because...

LIZZA: I take that point. Look, I covered the Trump White House now for four years. I interviewed Stacey Abrams the other day right before the election, and you know, I don't want to be too cute about this, but Donald Trump is no Stacey Abrams. What happened in Georgia, it was a more defensible post-election non-concession [!], I guess I would call it.

HAM: But the margin [of defeat in Georgia] was larger!

LIZZA: Yeah, but, let's, you know, I think it's fair to point it out, but I do want to call a little false equivalence on what Trump is doing in trying to delegitimize the incoming president, not honoring him with the traditional smooth transition during a crisis.

Exit question: Shouldn't the media, if it wants a quick concession by Trump, be encouraging states to conduct thorough audits of their ballots to satisfy everyone of the "crystal clear results of the election?"