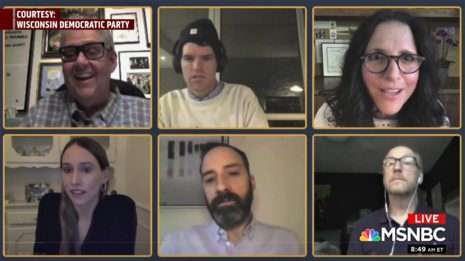 Vanity Fair acknowledges that Joe Biden has barely set foot in Wisconsin, but it has reassured its showbiz-obsessed readers that he has a secret weapon: celebrities. In one of the most laughably tone-deaf stories of the campaign season the magazine informs its liberal readers that celebrities will be deployed "virtually" (since it is too much to expect them to actually mingle with the Cheesehead peasants) to raise money for the Democrats in that state.

Despite the many polls promoted by the mainstream media showing Biden leading by like a bazillion points everywhere, the title of the glitz oriented magazine's Wednesday article is "Like Being on a Roller Coaster in the Middle of an Earthquake": Wisconsin Democrats Are Organizing Like Mad. Will It Be Enough?

So will it be enough? Not to worry. Reporter Chris Smith interviews the chairman of the state Democrat Party who lets us know that he has an army of celebrities in ready reserve.

Donald Trump’s 2016 electoral college victory was, in many ways, epitomized by his stunning win in Wisconsin. Hillary Clinton’s failure to visit the state during the general election campaign took most of the blame, but her weak Badger State ground game was probably more crippling. Ben Wikler has spent the past 18 months trying to fix that problem. An activist since his high school days in Madison, Wikler attended Harvard; helped former Minnesota senator Al Franken write two books and produced his radio show; launched his own podcast, The Flaming Sword of Justice; then became MoveOn’s Washington director—all good preparation for being elected last year, at 38, as chairman of Wisconsin’s Democratic Party. He has overseen traditional tactics like deploying thousands of volunteers, but also novel ones, including cast members of The Princess Bride, Parks and Recreation, and Veep reuniting virtually to raise money for the state party. Vanity Fair’s Chris Smith spoke with Wikler about the 2020 endgame in a crucial battleground state.

Despite that reassurance of a major celebrity deployment to the rescue, Vanity Fair's Smith is still worried.

You’ve talked about how the surest way to win Wisconsin is for a presidential candidate to visit multiple times and meet voters. Biden and Kamala Harris held small events in Kenosha after the police shooting of Jacob Blake, and in late September, Biden stopped at a foundry in Manitowoc but spoke to maybe a dozen people. Last Saturday, Trump held a rally in Janesville that drew thousands. Is the pandemic creating the same dynamic that lost the state for Democrats four years ago?

Uh-oh! Democrat state chairman Wikler tries to reassure Smith who doesn't seem too convinced, until he remembers about Celeb Power.

Trump may have the right-wing infrastructure, but you have Wallace Shawn and Julia Louis-Dreyfus.

That set Wikler into a starry eyed reverie gushing over celebs, celebs, CELEBS!

Making people laugh during a really dark time has been such a refreshing break from the paralyzing crush of Trumpian dystopia. Our first event of that kind was with the West Wing podcast during the Democratic National Convention, and it came about because of Bradley Whitford, who grew up in Madison, like me. It was our biggest grassroots fundraiser ever. I’m blessed to work with an extraordinary team, and people started brainstorming about what else we might do. A series of calls were made, and it turned out someone knew someone who knew Cary Elwes. I found out about this after it was in motion and could not believe it. The Princess Bride is my favorite movie ever. I memorized all the dialogue as a kid. Upwards of 100,000 people have participated in these events—people who had never chipped in before donated money to help support grassroots organizing.

Somehow, none of them remember that they spent most of the 2016 campaign touting the power of celebrities in electing President Hillary Clinton.