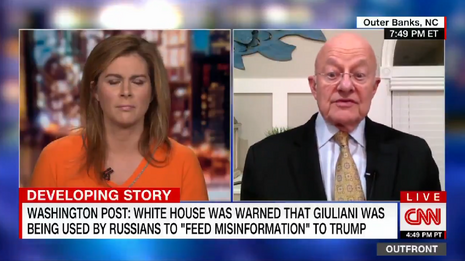 CNN's National Security Analyst James Clapper, best known to the world as flat out lying to Senator Ron Wyden about if the National Security Agency collected data on millions of Americans, is now peddling without evidence the idea that the Hunter Biden emails are really part of a 'Russian Soviet' attempt to influence the 2020 election. Although Trump-Russia collusion has been proven to be a fraud hyped by the media as well as Clapper himself, it is amusing to see him relapse to the same discredited conspiracy theory again.

His latest example of blaming it on the Russians came on Friday on Erin Burnett's Outfront.

“To me, this is just classic textbook Soviet Russian tradecraft at work,” former Director of National Intelligence James Clapper says as authorities are investigating if recently published emails are tied to a Russian disinformation effort targeting Biden. https://t.co/kCvZhYY2Jj pic.twitter.com/V2i83KSVXw

ERIN BURNETT: I want to go to James Clapper, former director of national intelligence under President Obama. So, Director, a bunch of questions from this, let me just start with this. How much does the source matter? Right, so to hear the story of this laptop, we don't know a lot. We do know that the way this information is getting out is through Steve Bannon, and Rudy Giuliani. How much does the source matter here?

And to me, this is -- this is a classic, textbook, Soviet, Russian tradecraft at work. Russians of analyze the target, they understand that the president, and his enablers crave dirt on Vice President Biden, whether it is real, or contrived, it doesn't matter to them. So, all of a sudden, 2 and a half weeks before the election, this laptop appears, somehow, without -- and emails on, it without any metadata. It's all very curious. So, here you have a willing target, and the Russians who are very sophisticated about how to exploit a willing target. And to me, that is what is at work here.

BURNETT: And so, you know, when you trying to figure out the specifics of whether that meeting email, for example, is real in the midst of this. Do you think stuff like that could have just been planted in here and been completely fake?

CLAPPER: I do. I think the emails could be contrived as well, particularly since, as I understand from what I've read, they appear without any metadata, that is from, to, or any technical data, at least anything immediately evident. Now, if this computer is in the hands of the FBI, they have, obviously, excellent, sophisticated technical and forensic analytical capabilities, and I think they will be able to sort it out, whether this is genuine or not. But it's all pretty curious, again, two and a half weeks out from the election.

BURNETT: Yeah, to come out via Bannon, and Giuliani, I mean, it does -- it does all smell funny.

Nice touch there, Clapper, with throwing in the "Soviet" description even though the Soviet Union collapsed almost thirty years ago.

Exit question: Will the moderator of the next presidential debate, NBC's Kristen Welker, attempt to prevent President Trump from bringing up the damning Hunter Biden e-mails by claiming it is really Russian (Soviet) disinformation?