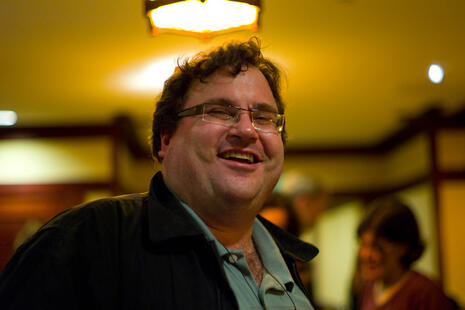 Um, Vox. You might have preferred to wait until after the election to reveal how both the Democrats and Silicon Valley billionaires have again embraced the dirty trickster co-founder of LinkedIn, Reid Hoffman. Both groups have gone through the motions of publicly keeping their distance from Hoffman after it was revealed that he financed Project Birmingham, a dirty tricks operation in Alabama to fool the voters into electing Democrat Doug Jones in a special election for the U.S. Senate in 2017.

This sleazy dirty tricks operation was so over the top that even the Washington Post condemned it on December 26, 2018 in "Internet billionaire Reid Hoffman apologizes for funding a group tied to disinformation in Alabama race."

Internet billionaire Reid Hoffman apologized on Wednesday for funding a group linked to a “highly disturbing” effort that spread disinformation during last year’s Alabama special election for U.S. Senate, but said he was not aware that his money was being used for this purpose.

Hoffman's public apology follows news reports on the effort, known as Project Birmingham, which involved the creation of misleading Facebook pages to persuade Alabama conservatives to vote for somebody other than Moore.

One Project Birmingham tactic described in the document claimed backers had created false online evidence that a network of Russian automated accounts, called bots, were supporting Moore. In his statement, Hoffman called this report “the most disturbing aspect” of the disinformation effort. This and some other key details were first reported in the New York Times.

Vox Recode briefly alluded to this sleazy political scandal but most of their article, "LinkedIn’s billionaire founder built a big-money machine to oust Trump. So why do some Democrats hate him?" seems to be an attempt to mainstream him to the point that the dirty trickster now appears to be accepted by Democrats and Silicon Valley billionaires.

And then there was Hoffman’s accidental funding of a disinformation campaign in Alabama during the 2018 election against Roy Moore, which Hoffman was eventually forced to apologize for. (In the aftermath, Hoffman promised that he’d publicly release a new disinformation policy for his political work — he still hasn’t done it.)

With that embarrassing admission out of the way, the rest of the Recode article is devoted to how the Democrats (and Silicon Valley) have begun to overlook Hoffman's unsavory past and now learned to embrace him due to showering the Democrats with money in order to defeat President Donald Trump.

Over the last four years, the tech industry, incensed by Trump’s hardline stances on immigration and climate change, among other issues, has politically mobilized. Its leaders have joined lawsuits against the administration, changed internal corporate practices to better handle the Trump regime, and financed the Democratic Party and its causes more aggressively than ever.

And it is Hoffman who has become the port of call for a new class of political neophytes who are brimming with Silicon Valley riches and anti-Trump fervor but have no idea what to do with either.

...Hoffman mainly influences other donors’ decisions, even if only implicitly, at the private get-togethers his team hosts, one of which was held this week. Hoffman aides set the agenda, offer funding recommendations, and sometimes invite people they have vetted, like Biden’s then-campaign manager Greg Schultz, to make their case. Hoffman’s team on occasion will challenge the other teams — which includes as many as 70 invited advisers to leading Silicon Valley givers like Schmidt, Facebook co-founder Dustin Moskovitz, and philanthropist Laurene Powell Jobs — to match Hoffman’s gifts to favored groups (many of which don’t disclose their donors).

...“He in a lot of ways has the stature, credibility, and connections to really play more of a David Koch role on the left,” said one Democrat in touch with Hoffman, drawing a comparison to the conservative megadonor.

...In Washington, things have gotten better between the DNC and Hoffman in recent years thanks to intentional efforts from both sides to smooth things over. That relationship has recently borne fruit: Hoffman and Conway talked up Hawkfish, the data firm started by Hoffman friend Mike Bloomberg, to both Biden and the DNC, which eventually awarded a small contract to the Bloomberg firm. And when the DNC began planning for a virtual convention, the DNC sought out Hoffman’s team for his expertise in the world of digital organizing.

...“For the Biden folks, it’s nothing about Reid,” said one Silicon Valley fundraiser for Biden. “It’s much more: Don’t have the optic of being too close to Silicon Valley because, ‘Oh, by the way, we have to message about what we’re going to be doing about Silicon Valley, too.’”

Behind the scenes, though, it is a far different story. Hoffman is needed. And that, in many ways, is the complicated story of Reid Hoffman and the Democratic Party in a nutshell.

So there you have it. Although the Democrats can pretend not to be close to him, "behind the scenes...it is a far different story. Hoffman is needed."

Thank you, Vox Recode, for letting us know just how much Democrats are dependent on a sleazoid dirty trickster best known for financing blatant campaign fraud.