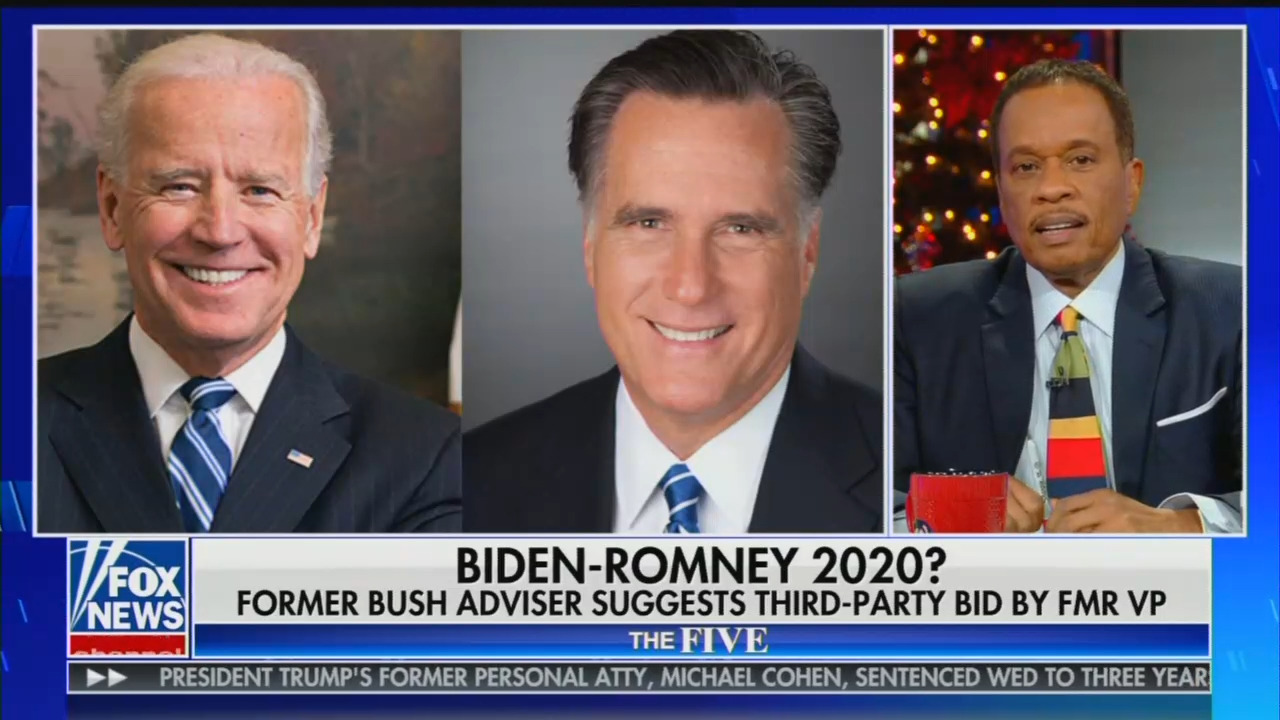 Politico Magazine published an article on Tuesday on how to defeat President Donald Trump in 2020 with an idea so goofy that you have to wonder if the author, #NeverTrump Juleanna Glover, must be working for his re-election since her widely-mocked idea is that Joe Biden and Mitt Romney form a third party, or "trans-party" as the author put it, in 2020 to run against both Trump and the Democrat presidential nominee.

This piece was then discussed on FNC's The Five with a segment dedicated to the topic in addition to results of a MoveOn.org poll on possible 2020 Democratic presidential contenders. Co-host Juan Williams described it as "a surprise choice" while Greg Gutfeld that while it's being mocked (as we'll do here), it could happen seeing as how the notion of Donald Trump running and winning a presidential camapign was widely panned a few years ago.

Glover's silly idea which any political amateur can see is completely self-defeating was presented in "Biden Should Run on a Unity Ticket With Romney." A funny upbeat cheerleader subtitle was also added on: "It could totally work. Here’s how."

The former vice president is clocking in well above the closest competition in the latest 2020 presidential polls. And, as he said last week, he is the “most qualified person in the country to be president.” Yet in a Democratic primary he could be cannibalized by his own kind.

So what's the solution? She continued: "Now here’s what Biden should do next: Pick a Republican running mate in a “trans-party” third-party run for the White House."

Yes. That's just the ticket! Form a "trans-party" to split the anti-Trump vote with the Democrat party in 2020. It could totally work:

Should Trump run again, this could be a “break-the-glass” moment for many Americans, creating an opening for a radical departure from our malfunctioning two-party political system. By injecting some ideological innovation into the process, we can break the hidebound precedents of two narrow parties running their ceremonious and illogical nominating process to select a candidate.

Biden may not know it, but he is already well-positioned to win a three-way election outright. Here’s how: Biden could run as the major third-party candidate with a principled conservative by his side....

More likely a deluded conservative by his side but you're on a roll so don't stop now:

The top of the ticket needs to come from the center-left, because he or she needs to get a plurality of the vote in the blue states Hillary Clinton won (227 electoral votes), yet be moderate enough to win a plurality in some combination of Trump states such as Florida, Pennsylvania, Wisconsin and Michigan (another 119 votes). A bipartisan ticket might even put purple states like North Carolina, Ohio and Indiana in play.

It could totally work...except for the nasty detail that all those anti-Trump votes in the states you just listed would be split with the Democrat nominee thus delivering those states once again even more easily to the Orange Man. Glover continued with her fantasy but at least does have a very brief reality check moment: "I know: It sounds crazy."

Perhaps it sounds crazy because it is crazy:

But the narrow path to electing Biden as the first president outside the two-party system in 168 years is more navigable than most think.

It could totally work!