The set of With All Due Respect was a sad place today due to the shocking revelation that the computer seized in the Anthony Weiner probe has caused FBI Director James Comey to announce that he is reopening the investigation into Hillary Clinton's emails. In addition to being irked at  Comey, Halperin and Heilemann seemed to be searching for lifeline assurances that this probe might soon go away and have little or no affect on the upcoming election in eleven days. Of course, the problem with that hope is that any news story involving Anthony Weiner is almost guaranteed to be comedy gold, thus holding the public interest. In fact, #Dikileaks is now trending on Twitter.

Let us now join Halperin and Heilemann in their animated frustration at this shocking turn of events:

JOHN HEILEMANN: So, mark, the details that John Podesta is talking about are still emerging. We're in a state of limited information but real information. On a scale one to Godzilla plus, where does this rank politically?

MARK HALPERIN: For the next 24 hours minimum it's Godzilla plus. I have no idea if this will effect the race. Without a doubt it will inspire republicans to press Democrats. We need more facts. What we do know is James Comey-- I've been saying this since a he had his famous press statement—public statement last month. James Comey is getting horrible advice. He is interfering in this election, he is responding to Congress. Congress has no business knowing about the closing and opening of criminal probes. I don't understand what the guy is doing. But from a pure political point of view: It's a nightmare for the Clinton administration-- campaign. I know why they're upset, they should be. But they shouldn't have put all their eggs in the Comey basket. The chickens are coming home to roost. How’s that for some poultry metaphor. I don’t understand what Comey is doing. That’s... 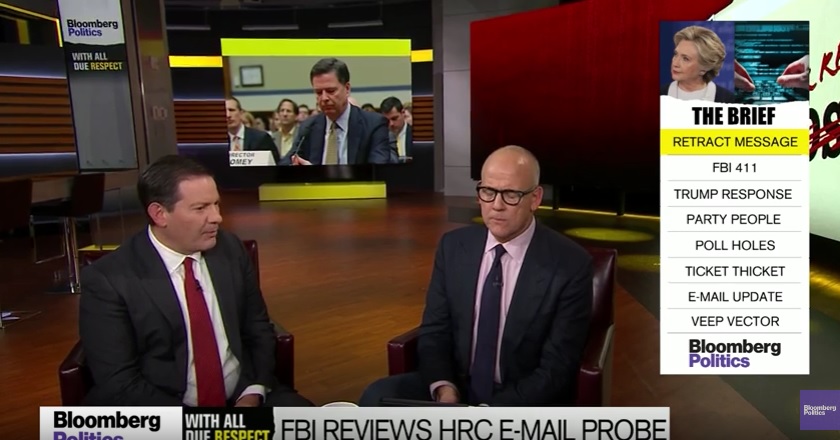 HEILEMANN: Poultry poetry. Look, I don't know about eggs in baskets. I will affirm and attest for the sake of the public record that you have been, in every instance, critical of James Comey, not just a month ago but throughout this entire thing. You have criticized Comey throughout. So—And there have been times I have agreed with you, times I have agreed with you less. At this moment it does seem like we have a problem with the FBI Director. And I actually think whether you are a Democrat or a Republican. If you are just looking on the merits, you would agree on the one thing--- one thing that John Podesta said. Which is that James Comey should come out, and stand--

HALPERIN: And Republicans agree with that. He need to do more.

HEILEMANN: ---in front of a podium and explain what the hell you’re doing here.

HALPERIN: But he can't, because he can't talk about a criminal probe. It's ridiculous!

HEILEMANN: For there to be accountability here, I believe he must clarify what this is about. Now—Again we don’t know right now if it's true that this is about Anthony Weiner. It makes sense Huma Abedin may have sent him an e-mail. This is obviously related to his sexual texting to an underage girl in North Carolina. If that’s the investigation, it's a federal crime because it crosses state lines. So it makes sense for the FBI to be looking at it. But it could be significant politically in the sense that, as you know, Donald Trump has been criticizing Hillary Clinton for trusting Huma Abedin. And has suggested in the past that there might be an issue here, with classified material getting out through her. So, this is politically very significant, or it could be nothing!

Sorry, John, but with the involvement of Anthony Weiner it definitely won't be nothing. Take a look at this Tweet from the New York Post revealing their cover story for tomorrow:

Exit question: Will Halperin and Heilemann laugh at the inevitable late night comedian jokes about Anthony Weiner's role in this probe or will they continue to retain their gloom over the effect this has on the election?