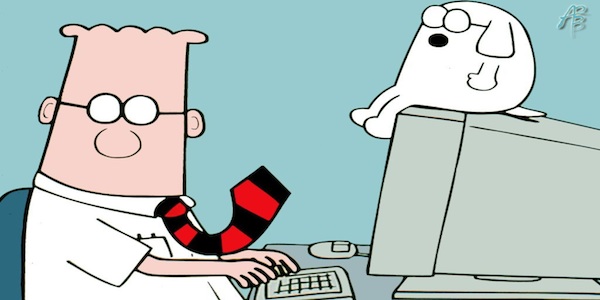 Imagine someone who is completely dead on in the accuracy of his predictions. Would you not want to analyze why this person is correct and listen very carefully to any future predictions he makes? Of course. That is what Jake Tapper of CNN has done but if you are Amanda Marcotte of Salon, being accurate is completely besides the point. What matters is that the winning predictions were made about Donald Trump. And who is guilty of the thought crime of politically uncomfortable prognostications in the eyes of Marcotte? Dilbert creator Scott Adams whom she labels as a fascist in the very title of her highly laughable article: Dilbert has gone fascist: The strange unrequited love Scott Adams seems to have for Donald Trump. Tossing aside any interest as to why Adams has been so amazingly correct in his analysis of why Trump is winning, Marcotte accuses Adams of dangerous thought crimes:

Scott Adams, the creator of “Dilbert,” wants you to know he does not love Donald Trump. Sure, he probably sleeps with Trump’s picture under his pillow every night and spends his days imagining himself running, hand-in-hand, with Trump down the beach, laughing at all those liberals and how sorry they’ll be when there’s a President Trump. But he is totally not a Trump fanboy and he isn’t voting for him. He swears!

Of all the bizarre spectacles that the Trump campaign has created, at the top of the list is the obsession the “Dilbert” cartoonist has with trying to convince America that his obvious hero worship of Trump is somehow a cool, detached analysis from a man who isn’t even interested in voting for the guy.

Actually, Amanda, the most bizarre spectacle is you obsessing over Adams' personal beliefs while showing complete disinterest in the thing that really matters...the astounding accuracy of his predictions about Trump. It is as if a racetrack handicapper demonstrates incredible accuracy yet some deranged Marcotte type bettor is going to obsess about about the handicapper's political or religious beliefs rather than focus in on the very useful analysis provided.

Okay, let us return to Marcotte's laughable political thought crime obsession about Adams as she lays out her charges:

Adams talks about Trump a lot, but always hastens to assure people that he is in no way supporting Trump. In an interview with the Washington Post back in March, Adams insistently demanded that he doesn’t think his “political views align with anybody” and that his praise for Trump should not be mistaken for support. He tacitly admits that Hillary Clinton has “greater mastery of the issues.” Nearly every post he writes includes some kind of disclaimer about how he has “disavowed all of the candidates.”

Adams really, really, really wants you to believe he’s not a Trump supporter, because he knows, on some level, that outing yourself as a Trump supporter is like admitting in public that your mom still pins your address inside your clothes in case you get lost. But, for all that Adams loves to wax on about how he is an expert on the art of persuasion — he even brags about his supposed ability to hypnotize “everyone” — he can’t even manage, despite intense repetition, to convince readers that he wouldn’t lick Trump’s shoes if given the opportunity to do so.

Now we get to the thing that really, really annoys Marcotte:

In the real world, Trump has off-the-charts unfavorability ratings, but in the world of Scott Adams, Trump is a svengali of politics, headed for a landslide in November, due to the enormous persuasive power of racist cracks and non sequitur ramblings. If you read enough of Adams’s blog, it becomes quickly apparent that the only reason Adams thinks this is because he himself is persuaded to vote for Trump. And, like his fellow narcissistic Donald Trump, Adams mistakes his views for the majority.

That prediction of a Trump landslide must really drive Marcotte nuts so she reacts by attacking Adams for completely irrelevant political beliefs she suspects him of harboring.

Need some more laughs? Okay, on the heels of Hillary's "I Am Woman" speech last night, Marcotte pulls the woman card on Adams:

Adams has a long history of being obsessed with the idea that women have grown too powerful and they are pushing hapless men around in our new feminist dystopia.

And finally, the accusation from Marcotte about the politically incorrect love that dares not speak its name...at least on the pages of Salon:

The only real question is why Adams doesn’t just come out and tell the world the truth about his Trump love.

If you think this bizarre hit piece on Adams was some sort of insanity outlier for Marcotte, a quick perusal of Newsbusters headlines about her from the past reveals a long history of laughable lunacy:

As an example of how a normal person reacts to someone with a record of unbelievable accuracy, we have Jake Tapper's interview on The Lead with Scott Adams in February.

JAKE TAPPER: Joining me to talk Trump is Scott Adams. He's the creator of "Dilbert" and author of a memoir/inspirational book called "How to Fail Almost Every Time and Still Win Big." And Scott on his blog has been analyzing the rise of the Republican front-runner for months now. And, frankly, he has some of the most interesting and accurate observations about why Trump is appealing to so many people and in the process winning.

But...but Jake! What about his secret thoughts on feminism? Isn't that what is all important?

TAPPER: Democrats like to say they would like to run against Trump. You clearly think that they are underestimating him.

SCOTT ADAMS: Yes, based on his talent stack alone. If you look at any individual talent he has, you can say, well, that's not the best in the world. But look how many he's put together. He knows strategy, business strategy, he knows negotiating. He's the best persuader I've ever seen. He's quick on his feet, he's funny. He's smart enough. He knows enough about politics. So, when you put that stack together, nobody really stands up to that stack. I've been predicting he's going to win in a landslide since last year.

TAPPER: Not just the nomination but the presidency?

ADAMS: Yes, I think it will be one of the biggest margins of victory in history.

Fascinating stuff but what is of most interest to Marcotte is what taboo thoughts may or may not be floating around in the crevices of Scott Adams' mind.