You might have heard the tales of horror over the supposed throwing of chairs by disgruntled Bernie Sanders supporters at the recent Democrat convention in Nevada. Several news outlets repeated those fables to demonstrate how barbaric the Sandernistas are in stark contrast to the "civilized" folks who support Hillary Clinton. California Senator Barbara Boxer who was present even claimed that she feared for her safety. However, one problem. No chairs were thrown. Snopes.Com has rated that story as false. 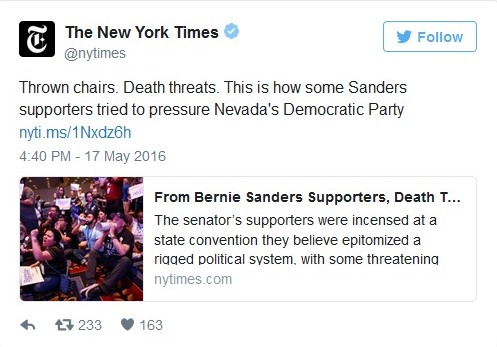 One of the news outlets that promulgated the fable about the thrown chairs was the New York Times:

Another culprit was CNN, which uncritically passed along tales about chairs thrown by the Bernie barbarians:

After Sanders supporters thought the Nevada Democratic Convention was being shut down prematurely, shouting ensued and there were reports of chairs being thrown.

The Snopes website investigated these claims and came to this conclusion: FALSE.

ORIGIN:On 14 May 2016, Democrats held a third-tier convention in Nevada, the events of which were, by all accounts, adversarial. Supporters of Bernie Sanders claimed that rules were adjusted and schedules changed without notice, while supporters of Hillary Clinton claimed Sanders supporters were violent and obstreperous and resorted to throwing chairs. Much of the initial reporting came from local journalist Jon Ralston, who live-tweeted events as they occurred at the convention on 14 May 2016. While Ralston didn't report at the time that chairs were being thrown at the convention, he later tweeted that:

Hey, Berniebot chair-throwing truthers: It happened. People saw it, inc. one journo who was there and reported it. https://t.co/J4XMWy3mGs

The chair-throwing claim was repeated across election coverage. In an interview with MSNBC's Chris Matthews and Rachel Maddow, Democratic National Committee chair Debbie Wasserman Schultz repeated, in concert with video footage of a man holding a chair aloft, the refrain that Sanders supporters had been throwing chairs at the convention:

It turns out that the original promulgator of the chair-throwing fable, local political journalist Jon Ralston, was trolling for proof of the event that he apparently did not see:

Unfortunately for Ralston, no video proof has emerged of the chair that he did not see thrown as noted by Snopes:

As far as we know, no video documenting such claims has yet surfaced, but coverage of the chair-throwing fracas continues unabated. At least one outlet held their own reporting to account when Ralston's came under question. NPR ran with Ralston's second-hand assertion about thrown chairs, but their ombudsman later pegged Ralston (who did not witness the chair-throwing) as the sole source behind the widely-repeated claim and admitted that no evidence had been produced that anyone had thrown chairs.

Snopes was relatively mild in their judgement of Ralston's story as being false compared to this harsh assessment by the leftists at CounterPunch:

Jon Ralston, the dean of political reporting in Nevada, has spread nothing less than a pack of lies about what went down at the state’s Democratic convention on Saturday. And the fact averse oligarchic national media has run completely riot with the provable falsehoods. No chairs were thrown at the convention Saturday. No death threats were made against the chair of the convention Roberta Lange. And Bernie Sanders delegates were not simply mad because their louder shouting was ignored.

Ralston has been the culprit behind each of these falsehoods; and the New York Times, CNN, MSNBC, and a dizzying array of other outlets have swallowed them whole then regurgitated them for their much more massive audiences.

OUCH! So why the eagerness to promote the chair throwing fairy tale? Probably because it helps the faltering Hillary campaign by comparing her favorably to the "out of control" Sandernistas. And it also explains the MSM frustration with Bernie for remaining in the campaign until the bitter end.