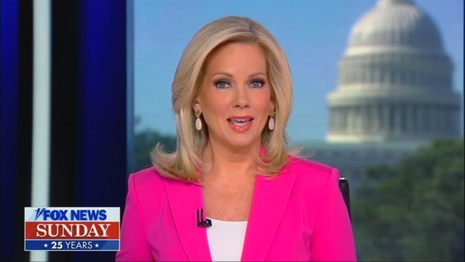 On Thursday, it was announced that chief legal correspondent and Fox News @ Night anchor, Shannon Bream will be the new anchor of Fox News Sunday after the former host Chris Wallace left the network for a gig at CNN+, which lasted a month before the streaming platform folded.

In a press release, the CEO of FOX News Media, Suzanne Scott announced that Bream would be taking the “helm [of] FOX News Sunday beginning September 11th.” “Shannon is an outstanding journalist, reporter, and anchor who has cultivated a strong and enduring relationship with the FOX News Media audience,” she added, noting Bream is “the first woman to anchor the program in its 26-year history.”

The press release made a point of noting that, when Bream was part of the rotational hosts that filled in after Wallace left for CNN, she “over-delivered” and brought in significantly higher ratings than Wallace did in his last year. This included a whopping 20 percent increase in viewers compared to the 2021 average.

While Wallace did make headlines with his CNN+ show Who's Talking to Chris Wallace by confronting New York Times race baiter Nikole Hannah-Jones and then-Press Secretary Jen Psaki, he put on an embarrassing display once it was announced CNN+ was being taken out back by parent company Warner Bros. Discovery.

During an interview with Hollywood producer Brian Grazer, Wallace begged him to make a movie about his interviews with former President Trump:

WALLACE: So, I have to ask a question. When we got to know each other a little better, you said to me on time that you thought there was a possible project in Trump/Wallace.

WALLACE: Well, I’m just – Did you really believe that?

GRAZER: I really believe that. Your interviews with him were perfect.

WALLACE: So, maybe we’ll talk after the—

WALLACE: -- the thing about going to do it.

But back to Bream, the press release says she’s still Fox News Channel’s chief legal correspondent, but a “rotation of journalists will guest anchor FOX News @ Night until a permanent replacement is named.”