CNN Panel Claims: No 'Parallel' Between Trump and Clinton Campaigns on Birther Issue 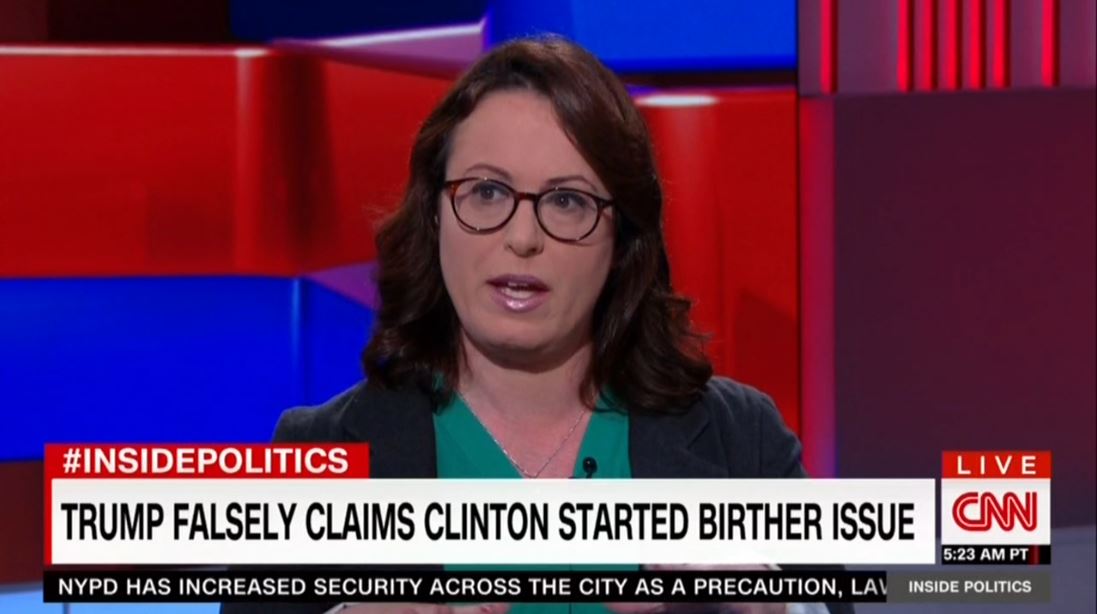 CNN’s Inside Politics tried to rewrite the history books on Sunday, by continuing the media’s new claim that Hillary Clinton’s campaign didn’t lean on birtherism in 2008 to fight then Senator Barack Obama. While anointing Trump the leader of the “Birther movement” they flat out denied Clinton had a hand in lending the conspiracy credence. Host John King hyped Donald Trump’s announcement that he believes Obama was born in the United States, “As flip-flops going you can score this one as off the charts.”

Panelist Maggie Haberman, a New York Times correspondent, stated that Trump is trying to lie about the origin of birtherism, “What he is going to do is, he is going to say, as he did say incorrectly on Friday, “Hillary Clinton started this.”” She went on to insist that, “Hillary Clinton never talked about this, her campaign aides never talked about this publicly.” But that’s not accurate.

An article published by Politico in 2011 asked, “Where did this idea come from? Who started it?” Their answer might shock Haberman and the rest of the CNN Panel. “The answer lies in Democratic, not Republican politics, and in the bitter, exhausting spring of 2008,” Politico wrote, “At the time, the Democratic presidential primary was slipping away from Hillary Clinton and some of her most passionate supporters grasped for something, anything that would deal a final reversal to Barack Obama.”

Haberman tried to downplay a memo from Mark Penn to Clinton questioning Obama’s “lack of American roots.” Penn also remarked that, “I cannot imagine America electing a president during a time of war who is not at his center fundamentally American in his thinking and in his values." She also brushed aside the involvement of Linda Starr, a Clinton supporter bittered by her primary loss. As The Daily Beast reported in 2010, Starr pushed Philadelphia attorney and 9/11 truther Philip Berg to question Obama’s citizenship status.

The New York Times writer argued that “there just isn't a parallel” between Clinton and Trump on birtherism because Trump, “Pushed [it] into mainstream at a point in 2011 when it was considered by most conservatives to be a fringe issue.” At the start of the segment King quipped that “the history books will record,” Trump’s flip-flop, but the history books also recorded the Clinton campaign’s involvement as well.

JOHN KING: As flip-flops going you can score this one as off the charts.

KING: The history books will record that Donald Trump finally faced and spoke the truth, seven years and 241 days into the Obama presidency and five years, four months and 20 days after the president released his long form birth certificate from the state of Hawaii –that's in the United States—in an effort to put birther conspiracy nonsense to rest. Last night at the Congressional Black Caucus Dinner in Washington, the president made light of it all.

KING: Why now? Why? Five years, four months, 20 days after the president released his birth certificate. And remember, Donald Trump said then that he was sending a team to Hawaii, which I don't believe he ever did. He later said he had good information that it was a fraud. It's not like he was quiet about it and never came out and said, “Okay, fine, I agree.” But why now? At a time when most Republicans said you had a few good weeks, the tide in the race is actually moving your way.

SARA MURRY: We tried to ask him that. We stood on chairs. We yelled the questions at him during his press conference that wasn't actually a press conference, in which he made this statement. He just had no interest in answering any questions about how he got to this point, why now. But I think the reality is it's the calendar.

That is not the same as a nominee having talked about this, pushed into mainstream at a point in 2011 when it was considered by most conservatives to be a fringe issue, and not one they wanted to talk about. There just isn't a parallel. And one of the things Trump has succeeded in doing is essentially turning this whole campaign and the dialogue around it into a form of Twitter where everything is equal and shrunk down to the same size.