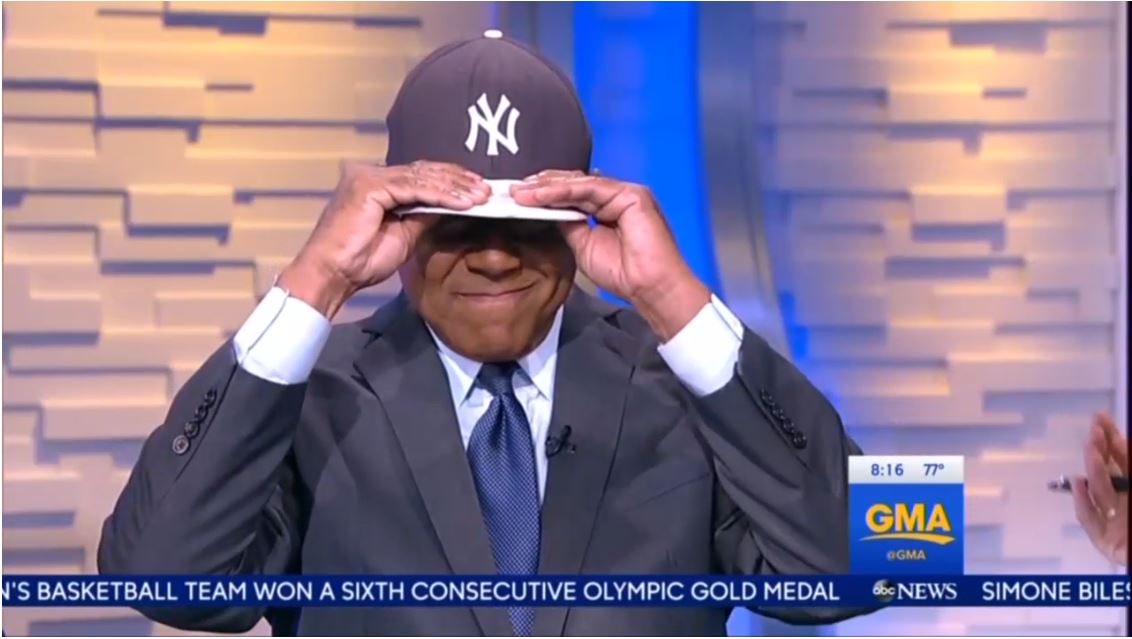 ABC demonstrated a marvelous case of hypocrisy on Sunday when it comes to its transparency and perhaps conflicts of interest. Early on in the morning on Good Morning America, correspondent Ron Claiborne delivered an energetic retelling of a New York Yankees’ victory. “Ron can barely hide his lack of objectivity when it comes to the Yankees,” joked anchor Dan Harris, as Claiborne put on a Yankees hat and announced, “Full disclosure.” But later on, when questioning Clinton Campaign Manager Robby Mook about future donations to the Clinton Foundation, Chief Anchor and Clinton lackey George Stephanopoulos failed to re-disclose his own contributions to the organization totaling $75,000.

Mook and Stephanopoulos were talking for a while about Donald Trump before the topic of the Clinton Foundation was brought up. “You announced this week that the Foundation would no longer take contributions from foreign governments or corporations, if Secretary Clinton wins the White House,” prefaced Stephanopoulos before asking, “Doesn’t it suggest that taking those contributions when Secretary Clinton was serving as secretary of state was wrong?”

“Well first of all George, the steps that were taken when Secretary Clinton went to State Department were unprecedented,” Mook claimed before rattling off some of the positive work the foundation purports to have done.

Stephanopoulos pressed Mook on if it was a liability for Clinton, quoting the Boston Globe:

Clinton’s campaign manager continued to claim the foundation was doing everything it could to minimize possible influence and, “To make sure there is no possible conflict of interest.” Ironically, Mook also praised the foundation's work in disclosing a list of donors, which is the reason Stephanopoulos had to make a public apology for not disclosing his donations to viewers while reporting on the book “Clinton Cash.” Throughout their whole conversation not once the Stephanopoulos mention he donated to the Clinton Foundation.

RON CLAIBORNE: What's being called a contender for the catch of the year in Anaheim, Saturday. As the Yankees took on the Angels. Check this out. The Angels’ C.J. Cron at bat, he hits one deep to left field! Yankees left fielder Brett Gardner goes back streaking, leaping. Look at this, into the stands, toppling as he goes there making the catch. Would have been a two-run home run. The Bronx Bombers went on to win that game a score of 5 to 1. YANKEES! I’m sorry.

I was into it.

DAN HARRIS: Ron can barely hide his lack of objectivity when it comes to the Yankees.

CECILIA VEGA: Is this why you couldn’t put your papers down to read— 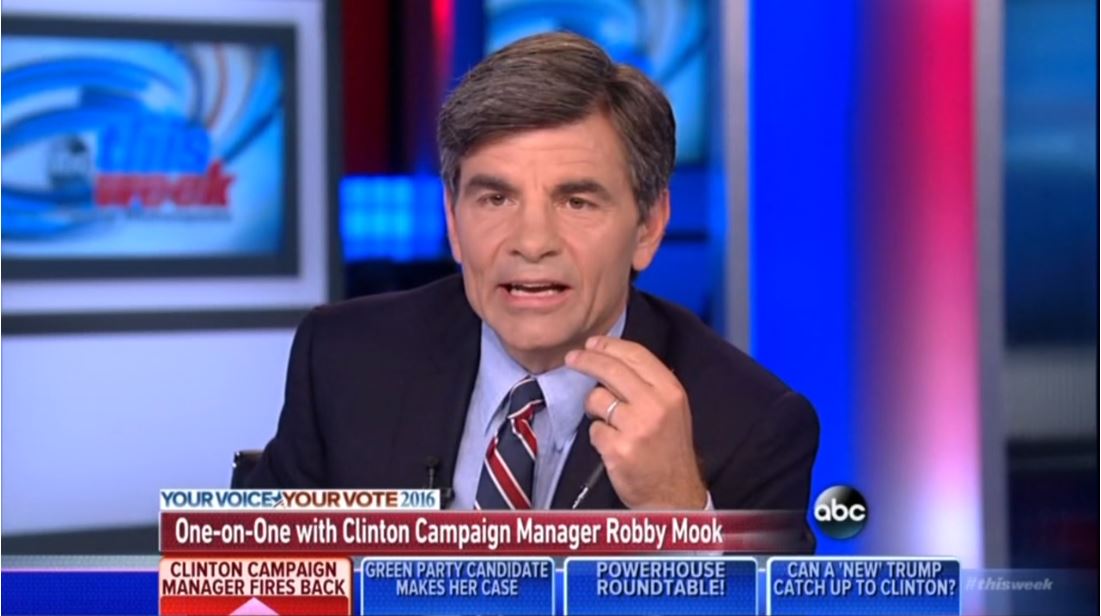 GEORGE STEPHANOPOULOS: A lot of questions this week also about the Clinton Foundation. You announced this week that the Foundation would no longer take contributions from foreign governments or corporations, if Secretary Clinton wins the White House. And that has raise a lot of questions, people wondering why now and not Secretary of state. Donald Trump Jr. in a tweet on Thursday said, “Is it ok to accept foreign and corporate money when Secretary of State but not when POTUS?” And you just hear Kellyanne Conway. Doesn’t it suggest that taking those contributions when Secretary Clinton was serving as secretary of state was wrong?

ROBBY MOOK: Well first of all George, the steps that were taken when Secretary Clinton went to State Department were unprecedented. It’s important to keep in mind this is a nonprofit philanthropic organization. 90 percent of the cost of malaria drugs has come down because of the work of the Clinton Foundation. There are over 10 million people around the globe today receiving lifesaving HIV and AIDS drug treatments because of the Clinton Foundation. We look at Donald Trump, his bottom line is interconnected to all kinds of financial interests that he refuses to disclose. They actually effect his net worth.

So the steps that are being taken is she should become president are unprecedented. So we’re happy— We’re happy that that planning is taking place, but I think that when we’re talking about transparency, when we talk about discloser Donald Trump need to release his taxes, we needs to explain his financial ties. Just yesterday we read in the New York Times that his businesses owe millions of dollars to the bank of China. Donald Trump talks all the time about a trade war with China. How can he really do that when millions of dollars in his own bottom line could be effected directly by the Chinese government?

STEPHANOPOULOS: Let’s stay on the Foundation though for a second. It’s not just Secretary Clinton’s critics who are suggesting a change should come. You had former Governor of Pennsylvania Ed Rendell said that they should stop taking the contributions now, should disband. The Boston Globe, endorsed Secretary Clinton during the primaries, here’s what they wrote:

MOOK: Well what the foundation has said is that they will continue to operate. Again George, I want to reiterate— I want to keep in mind millions of people around the world depend on lifesaving health treatment the foundation provides. So, just pulling the plug on that will literally threaten lives around the globe. So the foundation is in the processes of figuring out how to refocus, reshift— As I said earlier The steps that they pledged to take as a philanthropic organization are unprecedented.

You didn’t hear questions about the Bush Foundation when the second Bush came into office. His family Continued to serve on the board there. President Clinton said he’ll step down from the Clinton Foundation board.

STEPHANOPOULOS: But hasn’t it become a liability?

MOOK: What? No. Look, what the foundation is saying is they don’t want to become a distraction that they what to go as far as they possibly can to make sure there is no possible conflict of interest. But again George I just want to be fair here. Donald Trump is refusing to disclose deep financial ties that potentially reach into the Kremlin, which could influence foreign policy decisions. But where countries like China have leverage over him, and could potentially distort his decision making there. None of this is being disclosed. You and I are having this conversation because the foundation has chosen to take unprecedented steps to disclose their donors of the last few years.