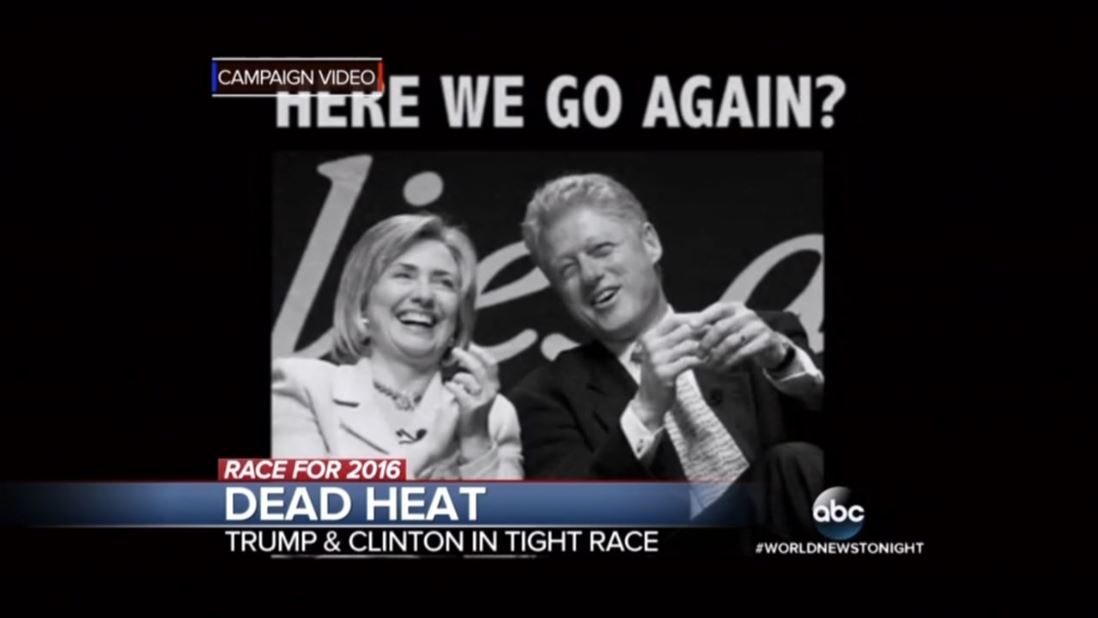 During their evening news broadcasts, ABC and NBC whined about Trump’s new attack video that goes right to the heart of the Bill Clinton rape claims. “He starts to unbutton my top there, and I try to pull away from him,” said an unidentified voice on NBC Nightly News, with a picture of Bill Clinton smoking a cigar in the background. The video features audio from interviews with women who alleged Clinton assaulted them, as well as Monica Lewinski. And the reporters from ABC and NBC didn’t like it one bit.

“The Trump video then ending with this. Hillary Clinton laughing, with the words, “here we go again?,” reported ABC’s Tom Llamas on World News Tonight. Llamas went on to say, “Tonight, the Clinton campaign saying that type of tactic won't work with voters.” The ABC reporter then played a video of Hillary Clinton’s interview with CNN’s Chris Cuomo, from last week, where she says she doesn’t feel the need to respond.

NBC’s Kristen Welker took a different approach, whining that Hillary now needs to defend herself on two fronts in her battle for the White House:

All this, as our latest NBC News/Wall Street Journal poll shows the likely fall fight between Trump and Clinton is already a dead heat. Clinton leads the presumptive GOP nominee by only three points. And a third of Sanders supporters saying they're not backing Clinton if she's the nominee. Her numbers middling amidst her fear fierce battle against Bernie Sanders.

The accusations against the former president very serious indeed, but instead of looking into the claims of the victims they brush them off as “old and discredited.” The networks also ignored new details, which broke last week, of Bill Clinton’s friendly relationship with the convicted pedophile Jeffery Epstein.

DAVID MUIR: We turn next this Monday evening to the race for the White House. And tonight, a new ABC News poll showing this is a dead heat. Our new poll showing Donald Trump with a two-point lead over Hillary Clinton, that's within the margin of error. Trump now bearing down with his most personal attack yet on former president Bill Clinton, and you will hear it here tonight. Hillary Clinton late today fighting back with fighting words of her own about something else. ABC's Tom llamas on the campaign trail again for us tonight.

MONICA LEWINSKI: I was very nervous. 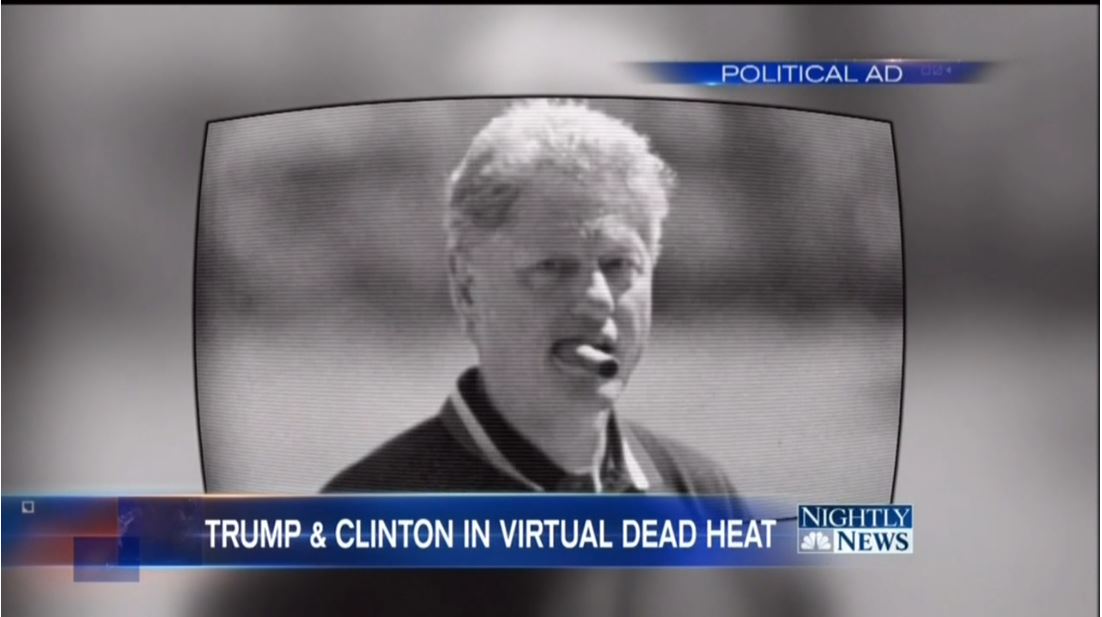 LLAMAS: Even using the voice of Monica Lewinsky. The Trump campaign posting this video with an image of Clinton smoking a cigar and audio of other women who raised accusations about sexual misconduct against the former president. The Trump video then ending with this. Hillary Clinton laughing, with the words, “here we go again?” Tonight, the Clinton campaign saying that type of tactic won't work with voters. And just last week, Hillary said this when pressed about decades-old accusations against her husband resurfacing.

CHRIS CUOMO: Do you ever feel compelled to defend your honor, the honor of your husband?

CUOMO: With statements that he's making that go to the core of the relationship?

CLINTON: No. Not at all. I know that that's exactly what he is fishing for and, you know, I'm not going to be responding.

LLAMAS: Today in Detroit, Clinton launching her own attack against Trump, describing him as an empty suit dangerous for America.

CLINTON: He could bankrupt America like he's bankrupted his companies. I mean, ask yourself, how can anybody lose money running a casino? Really.

LLAMAS: And Bill Clinton putting the pressure on Trump to release those tax returns.

BILL CLINTON: Her opponent, who never tires of telling us how much richer he is than the rest of us won't release his tax returns.

MUIR: And Tom Llamas with us live tonight. And Tom, there was something else in that ABC news poll that showed 1 in 5 Bernie Sanders supporters plan to vote right now for Donald Trump over Hillary Clinton? The Clinton camp has to be concerned about that.

LLAMAS: David, with such a tight race, that is not a good sign for the Clinton campaign. And Senator Bernie Sanders won't give up. Just moments ago, again, demanding that Hillary Clinton debate him before the California primary. David? 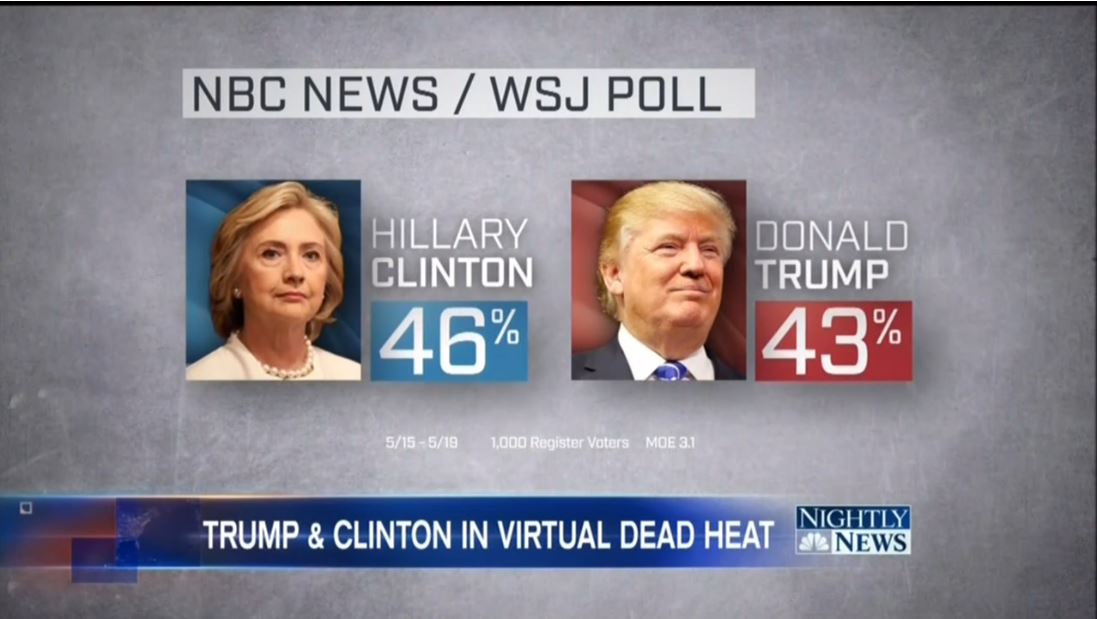 LESTER HOLT: Good evening. Big developments in the race for president, with our poll showing Hillary Clinton and Donald Trump in a virtual dead heat. A new NBC News/Wall Street Journal poll shows Clinton leading trump 46 to 43 in a head-to-head showdown, that's within the margin of error. There are also fresh signs the race will teeter on gender and racial fault lines. Our poll also shows Clinton with a 13-point lead among women, while Trump leads among men by nine points. A 30-point advantage among white men. The splits are coming into sharper focus at a time Clinton's prolonged battle to vanquish Bernie Sanders is eroding her position against Trump. NBC's Kristen Welker leads us off tonight. Kristen, good evening.

Hillary Clinton ramping up her fight on two fronts, against Donald Trump and Bernie Sanders. And today, it's getting nastier.

HILLARY CLINTON: The last thing we need is a bully in the pulpit!

CLINTON: He could bankrupt America like he's bankrupted his companies.

WELKER: But Trump unleashing a scathing new attack of his own in an Instagram video, again slamming former President Bill Clinton's past indiscretions.

UNIDENTIFIED: He starts to unbutton my top there, and I try to pull away from him.

WELKER: All this, as our latest NBC News/Wall Street Journal poll shows the likely fall fight between Trump and Clinton is already a dead heat. Clinton leads the presumptive GOP nominee by only three points. And a third of Sanders supporters saying they're not backing Clinton if she's the nominee. Her numbers middling amidst her fear fierce battle against Bernie Sanders. Who today in California showing no signs of letting up. Sanders is touting a big victory today. The DNC agreeing to give him a major role in shaping the party's platform if he doesn't win. And he's still running hard. Saturday Night Live having a little fun with all of it.

BAR TENDER: Senator Sanders, I'm sorry, but the night is over.

FAKE BERNIE SANDERS: No, no, it's not over. It's not over until I say it's over.

WELKER: The joke underscoring a serious problem for Clinton

DAVID WASSERMAN: It's going to be impossible for Hillary Clinton to win this election without the votes of Bernie Sanders supporters.