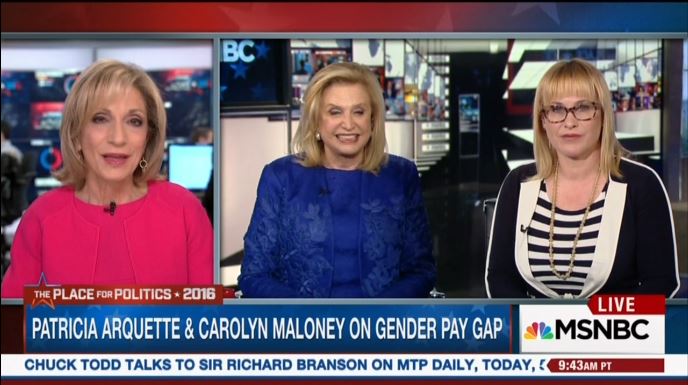 Did you know that Tuesday was “Equal Pay Day,” the day that a woman’s pay supposedly catches up to that of a man’s from the previous year? Well don’t you worry, Andrea Mitchell has got you covered. Mitchell brought on Congresswoman Carolyn Maloney and Hollywood star Patricia Arquette to bemoan the plight of the oppressed and push their new congressional study.

To kick off the segment Mitchell rattled off a series of statistics about the gender pay gap and the pay gap between women of different races. Neither the statistics Mitchell was reciting nor did the information graphic shown on TV had any citation of its origin. “It takes women an extra three months, and then some, to close that gap. It takes even longer for some women. For moms, their equal pay day isn't until June 4th. African-American women have to work until August 23rd. For Native American women, that day is September 13th. And if you’re Latina, it is not until November 1st, almost the end of the year.”

Arquette, who was lauded by liberals for decrying unequal pay at the Academy Awards, proclaimed “The Senator has worked with the Joint Economic Committee on this incredible report that we have out. But we can't keep ignoring the data. Year after year, there has to be concrete changes made. Women can't wait any longer.” Both guests perpetuated the myth that there is wide ranging pay discrimination throughout “98 percent of all industries.” But is this really the case?

This time last year The Daily Signal reported that, “When accounting for relevant factors that affect pay … the difference between average male and female wages shrinks to about 5 to 7 cents on the dollar.” A discrepancy of 5 to 7 cents is literally pennies difference in pay between men and women, and nowhere near the 79 cents on the dollar that Mitchell and her guests were hyping. Even the liberal-leaning fact-checking website PolitiFact found similar numbers regarding the difference in pay between men and women.

Mitchell and both guests praised World Cup winner Megan Rapinoe for speaking out about how the national women’s soccer team was paid less than the men’s team. They used this case as evidence that there is a systemic problem in the way women are paid in America. But since the sport of soccer is known for being ran by corrupt and unethical individuals it may now be the best example to rest the case on.

Mitchell also used the segment to try and rewrite history and extend the Republican War on Women narrative into the past. “And not to be too gloomy, but I remember first covering this with First Lady Betty Ford and even the Republican First Lady couldn't move the ERA across the finish line.” Mitchell’s mourned that Betty Ford failed to be a cooperative Republican and get the feminist agenda rubber-stamped over conservative objections.

ANDREA MITCHELL: Today is equal pay day. Marking the day that women catch up to earning the same salary as man earned by the previous year's end. It takes women an extra three months, and then some, to close that gap. It takes even longer for some women. For moms, their equal payday isn't until June 4th. African-American women have to work until August 23th. For Native American women, that day is September 13th. And if you’re Latina it is not until November 1st, almost the end of the year. In her Oscar acceptance speech, Patricia Arquette addressed the gender pay gap.

PATRICIA ARQUETTE: As a citizen of this nation, we have fought for everybody else's equal rights. It's our time to have wage equality once and for all, and equal rights for women in the United States of America.

[Cuts back to studio]

MITCHELL: Today Patricia Arquette is in Washington with Congresswoman Carolyn Maloney to continue to show how big an impact this issue has for all parts of life. And they join me know. Welcome both. Thank you so much. Patricia Arquette, you were so impactful in that speech and we saw Meryl Streep standing up and cheering for you. And women all over—women and men I should say, all over America were cheering for you. What do you hope to accomplish with your advocacy?

ARQUETTE: Well, women have been fighting for equal rights for 227 years and at this point now, we've reached a breaking point. Cause women are contributing to 40 percent of our American families. We have millions of women who are single mothers. 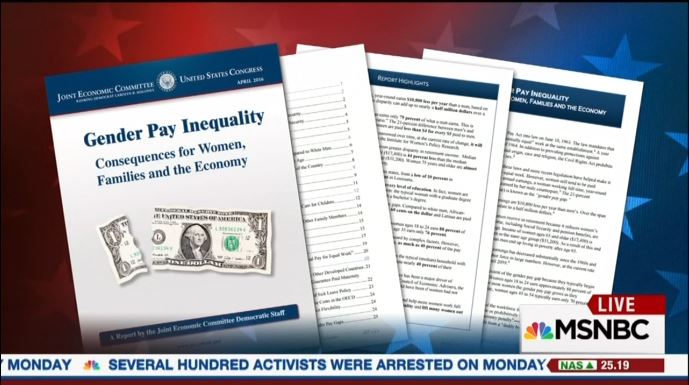 And because they are not getting paid equally, we have one in five hungry kids in America and a majority of them have full-time working moms. So, we need to make sure that women are paid and we can't keep looking-- The senator has worked with the Joint Economic Committee on this incredible report that we have out. But we can't keep ignoring the data. Year after year, there has to be concrete changes made. Women can't wait any longer.

MITCHELL: And I know this is not an issue just for Hollywood, but you and Jennifer Lawrence and other Hollywood women, actors, have pointed out the disparities there, but your study, the Joint Economic Committee study, congresswoman, makes it very clear that this affects all sectors of the economy.

CAROLYN MALONEY: Yes, Andrea. And thank you for focusing on it in your show. It's a comprehensive study that shows the tremendous differences between age, by state, and by race as you pointed out in your opening.

And it show that when women begin their careers there's little discrimination but by the time they're 75, they're making half the income of a man and it has, over their lifetime, they've lost over half a billion dollars in income. 10,800 each year and it contributes to older women being the largest segment of poverty in old age and this is unfair.

So, we need to have women respected and in the constitution, we fought hard to get the right to vote and now we need full equality in the constitution and programs and policies that allow women to balance work and family. We have a state by state comparison. New York, my home state, does the best. Louisiana does the worst. But there shouldn't be a disparity between states. Women that are working and should be treated the same in all states and should have equal opportunity and equal pay for their work and the dollars they've earned.

ARQUETTE: We see it— I’m sorry.

MITCHELL: I'm sorry to interrupt you. I was just going to show you how Megan Rapinoe speaking—Here she is, a member of the World Cup champion [women’s soccer team], an Olympic gold medalist. And she was speaking today on behalf of the women's soccer players, shocking us all when they came out on "The Today Show" last week. 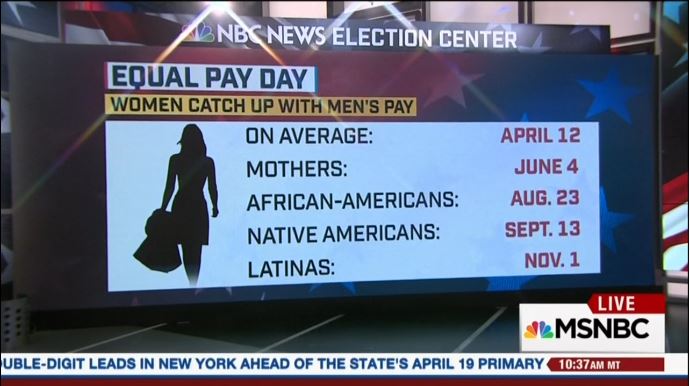 [Cuts back to studio]

ARQUETTE: Well, we see this pay discrepancy between women and men in 98 percent of all industries. So it's impacting women across the board. And as the senator said, it costs the average women almost a half million dollars over her lifetime. The gender pay gap. And with women with higher education, it costs them $2 million over their lifetime. So it's an enormous impact.

MALONEY: And it is unfair. And as a soccer player's pointed out, it affects women in all categories, even very successful. How can you be more successful than winning the world cup? And bringing in the greater crowds and the more revenue and yet they were paid disproportionately and unfairly.

And this has to change. This is America. We talk about fairness. The president talked about it this morning. The whole country says they believe in it. Let’s take action and pass paid family leave for the birth of a child. Andrea, we're among two nations in the world that don't provide paid family leave, America and Papua New Guinea. And let's put women in the constitution and let’s treat them fairly. So-- And I want to thank Patricia for putting a spotlight and really elevating these issues to a national discussion.

MITCHELL: And not to be too gloomy, but I remember first covering this with First Lady Betty Ford and even the Republican [emphasis on Republican] first lady couldn't move the ERA across the finish line.

MITCHELL: Congresswoman, thank you so much. Patricia Arquette, thanks again for all you’re doing on this.

ARQUETTE: Thank you for having me.