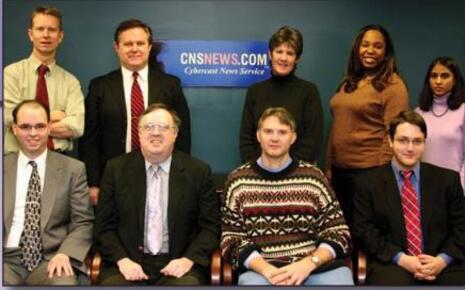 We at the Media Research Center and NewsBusters are sad to report that veteran journalist and MRC employee Randy Hall passed away on July 16, 2021 at the age of 66. Hall suffered a stroke in 2020 and had been dealing with health issues since last October.

Randy spent the bulk of his career at MRC serving as a writer and editor for the CNSNews.com news division, where he covered a broad range of political, cultural and human interest issues. A versatile writer, Randy produced every type of content for CNSNews.com, from quick, breaking news posts to hard-hitting, meticulously researched investigative stories.

(Hall can be seen in the accompanying picture, seated, second from the left.)

Randy’s work for CNSNews.com was regularly cited and linked to by other major national news media organizations, ranging from Fox News Channel to The Drudge Report and Newsmax.

From March of 2007 to October of 2020, Hall was a contributing writer for NewsBusters.org. He often wrote about conservative media figures fighting back against the left. For instance, this May 19, 2020 item: “Fox News Meteorologist Janice Dean UNLEASHES on Andrew Cuomo, Liberal Media.” Here's a link to the archive of his NewsBusters work. His final contribution was on October 9, 2020.

Hall also highlighted left-wing craziness, such as this June 14, 2019 item on ABC’s The View: “Joy Behar: Climate Change Could Prevent Joe Biden From Curing Cancer.” Randy would often write about just how far behind the liberal CNN and MSNBC are in the ratings.

MRC Vice President of Free Speech America and Business Dan Gainor remembered Hall as “a very good soul,” adding that “[t]he world is worse off with his loss.”

Michael Chapman, the managing editor of CNSNews.com, recalled, “Randy was a very nice man, very kind, and always eager to write another news story.  He certainly helped keep the page full for CNS News. It's sad news. Please remember him and his family in your prayers.”

NewsBusters associate editor Scott Whitlock called him a “very kind person who was able to spotlight details NewsBusters readers cared about. He will be missed by all of us here at the Media Research Center.”

Hall was a very active Star Trek and Star Wars fan as he attended numerous conventions. Here's one of his reviews of a fan-made Star Wars film. He is survived by his twin brother Wayne.