Brent Bozell: Journalists Are Either Lying or ‘Fully Vested’ in Biden’s Socialism

According to Brent Bozell, journalists are either “fully vested” in the radical socialism of Joe Biden or they are simply lying with their spin of the Democrat’s “bold,” “ambitious” agenda. Appearing on Varney and Co. Thursday, the MRC president declared, “What Joe Biden is recommending makes Barack Obama a piker by comparison. For them to say he was pragmatic, for them to say this was feel-good, for them to say this was bipartisan, these are lies, Stuart. These are lies.”

Calling out the complicit press, he added, “They know it. Or... if they're not lies, they're fully vested in socialism themselves. This is not a news media anymore.” He concluded, “Look, last night what did we see by any objective America sure? You saw the proposal for the greatest expansion of the federal government in the history of the United States of America.”

A transcript of the segment is below. Click "expand" to read more.

VAN JONES: It was really beautiful. I mean it was beautiful.

ANDREA MITCHELL: I thought it was a remarkable speech.

BRIAN WILLIAMS: After four years of a monotone shout, it was bracing to hear a speech delivered at times by a whisper.

STEPHEN COLBERT: It hasn't felt that normal in five years.

STUART VARNEY: Okay. All right. The media just loved the president's speech last night, didn't they? However while the left praised the President, wasted absolutely no time, really bashing Republican senator Scott for his rebuttal. Watch this.

JONES: The messenger was great but the message was nonsense.

NICOLLE WALLACE: This speech delivered from a planet where facts don't matter where the current Republican Party resides.

JOY REID: I'm not sure what the purpose of this was. I am shocked and a bit embarrassed for him. This was a lot of opportunity. Tim Scott had an opportunity to make his mark on criminal justice reform and this ain't going to do it. This wasn't it. 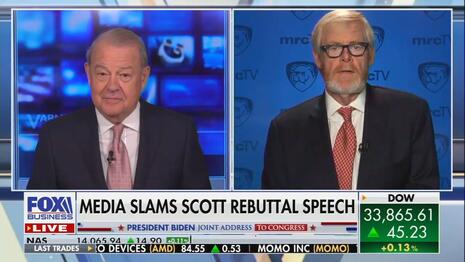 VARNEY: Okay. The gentleman on the right-hand side of the screen, the one and only Brent Bozell, who is clearly not surprised by the media's response. Have at it, Brent.

BOZELL: Well, I was thinking while listening to those clips, watching those clips about Tim Scott. If Stuart Varney had made, said those exact same words about anyone of a thousand Democratic elected officials or spokesmen of any nature you, Stuart Varney would immediately be called a racist for having said that. And in fact, there would immediately be calls for your resignation from Fox News. Am I telling the truth or not?

VARNEY: You're telling the truth. That is exactly what would happen.

VARNEY: When is it going to change, Brent? I think I've been asking you this question, five, six years now. The answer is always the same. It is not going to change. Well, do you see any change possible on the part of mainstream media, anything at all?

BOZELL: No, I don't. I don't. It's over. It's over. MSNBC, CNN, ABC. Look, last night what did we see by any objective America sure? You saw the proposal for the greatest expansion of the federal government in the history of the United States of America.

VARNEY: Got it. Brent Bozell, spelling it out, we appreciate that. Come back.