MRC Demands an End to Amazon’s Hate Against Conservatives 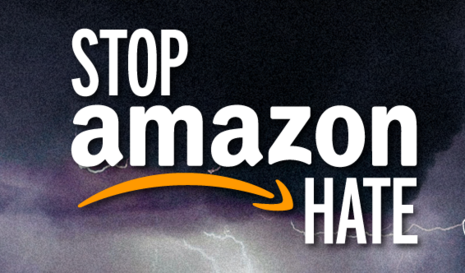 Media Research Center President Brent Bozell on Tuesday released a statement on Amazon's promotion of hate toward conservatives. Here is the statement in its entirety:

“We are calling on all conservatives to demand Amazon stop the hate. Conservatives can visit StopAmazonHate.org to join and tell Amazon to stop selling hate. Amazon will do anything to justify censoring conservatives but doesn't even bother to clean up its own site. Let Amazon know this double standard will not be tolerated!”

Amazon banned conservative books for sale on its site and partnered with the anti-Christian bigots at the Southern Poverty Law Center to block conservative non-profits from participating in their Amazon Smile program.

“Amazon has directly profited and continues to profit from products with violent slogans like “Kill All Republicans” and “A Good Cop is a Dead Cop.” Hundreds of products including riot gear, anti-police memorabilia and even t-shirts glorifying the Columbine shooters are still being sold on Amazon to this day. The hypocrisy is stunning. We will not stop until Amazon stops its hateful practices against conservatives. Visit StopAmazonHate.org to learn more.

The MRC is a founding member of the Free Speech Alliance. Visit mrc.org/freespeechalliance for more info."