The Media Research Center’s Rich Noyes appeared with Neil Cavuto, Monday, to slam the “sophomoric,” “absurd” Boston Globe for printing a fake front cover that speculated on what a future Trump presidency might be. Noyes derided the effort to pass off a stunt editorial as real news “As a political hit job, this is pretty sophomoric. It's absurd.”

The faux front cover of the paper has a picture of Trump and the headline: “Deportations to Begin.” Noyes imagined, “Would they do this about what would a President Sanders be like? ‘The markets would crash 30, 40, 50 percent. Businesses would fold.’”

Pointing out it’s not just the Globe, he noted, “Now we have this phenomenon campaign where the New York Daily News does a nasty cover story on Ted Cruz telling him to take the FU train.”

For more on the networks touting obnoxious liberal editorials as news, go here. 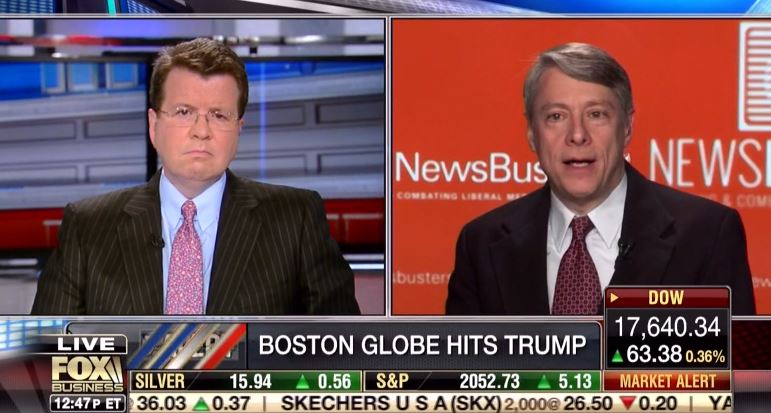 NEIL CAVUTO: I want you to look at this cover. It may be some of you have seen this before. It’s the Boston Globe cover that mocks what would happen been a couple months into the presidency of Donald Trump. “The deportations set to begin.” He’s not pleased by it. But I want you to step back, whether it is just a Republican hit job, more like hack job, or whether those on the left would apply for the same sort of glee to seeing something like this if it were Hillary Clinton and it was criminal activity that was raised or something otherwise outrageous. The Media Research Center’s Rich Noyes here on that. I suspect that we needn’t worry. But more to the point, what do you make of this and the fact that the Globe is kind of defending it? 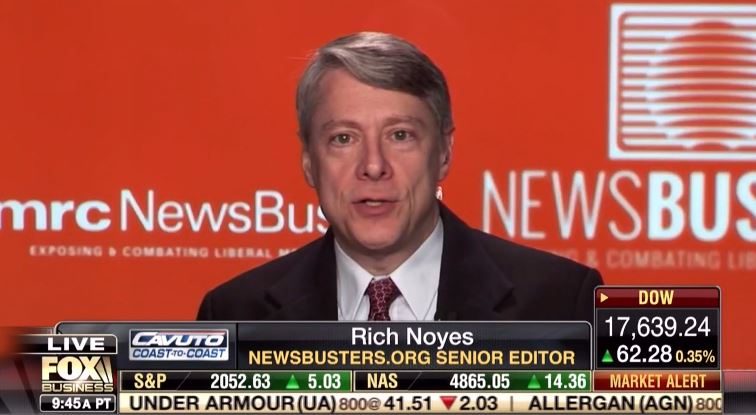 RICH NOYES: Well, I mean, as a political hit job, this is pretty sophomoric. It’s absurd. You know, the Boston — Massachusetts primary was five weeks ago. You know, when the Boston Globe had a chance for impact, they editorialized in favor of John Kasich. He got beat by 30 points by Donald Trump in that primary. Now, when it’s completely out of their region, they’re coming out with another one of these attack editorials. They wrapped it around their front page with fantasy news that doesn’t make any sense. Some of them are really silly items. They got publicity for it, but I don’t think it’s good publicity. I think this is really a gift to Donald Trump, because he can denounce it and look like he is on the high ground. And you are right. Would they do this about a, you know, what would a President Sanders be like? “The markets would crash 30, 40, 50 percent. Businesses would fold.”  President Clinton? “Tax rates drive businesses away.” You know, they could do this for anybody. 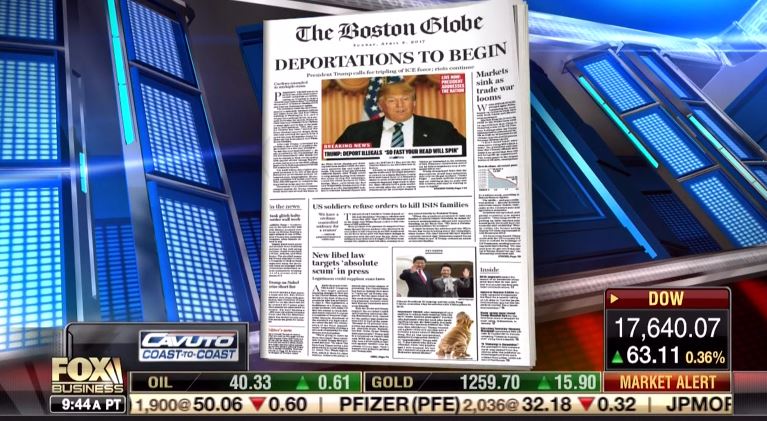 CAVUTO: It would not have been fair. It would not have been balanced. But leaving that aside, I wonder, too, giving it the appearance that it’s a legit paper, another words, a legit story. I mean, at first blush, you might just sort of say, “Whoa, whoa, whoa.” It’s sort of like an Orson Wells War of the Worlds thing. A lot of people cut into broadcast midway and didn’t know it as all a facade. But that’s what worries me, unsuspected people who, for example, take Oliver Stone’s rendition of the assassination of John Kennedy to be the Gospel truth. Um, that’s what worries me. That people would leap on this and say “It must be so. I just saw it in the Boston Globe.”

NOYES: Yeah. This was wrapped around the front page, so people would have seen this on their front door steps, seen this on newsstands.

NOYES: And, you know, you know, it was not the news. It was what their own people made up in their own imagination.

CAVUTO: And it also gives you some pause about the people who write the so-called legitimate news stories. Now, I know that there is this fire wall between editorial and opinion. But, I mean, when they are blurred like that, as they have clearly on the cover of the New York Daily News, which makes a habit of constantly, constantly going after Donald Trump and even Ted Cruz. There’s not quite the same zeal with going after the other side.

NOYES: No. That is exactly right. And now we have this phenomenon campaign where the New York Daily News does a nasty cover story on Ted Cruz telling him to take the FU train. Well, that becomes the news then on CBS—

NOYES: — on NBC, on CNN.  They want to display that cover. The Boston Globe does this against Donald Trump. It becomes news on ABC, NBC, CNN. They all want to promote it and discuss it as if it’s a relevant, meaningful contribution. It’s just a liberal editorial, but a sober editorial wouldn’t get that kind of attraction. So, they take it to a nasty extreme.

CAVUTO: I think that you hit the nail on the head there. I don’t have figures to prove this, but I suspect what you’re saying is more right then it is wrong. That obviously there must have been an increase, I’m thinking, obviously, in newsstand sales. There is certainly buzz for the New York Daily news for these over-the-top, in-your-face covers. And that te Boston Globe took a look at that and said, you know, we could do the same.

NOYES: Right. And it certainly get some buzz. Whether it has the impact they want, again, I think that this probably helps Donald Trump more than it hurts him.