The recurring media narrative of 2016 continues: stories that could embarrass Donald Trump get lots of coverage, while stories that embarrass Hillary Clinton get little or none. In today’s episode, the three broadcast news networks yawned at newly released audio of Hillary Clinton disparaging Sanders voters who “lived in their parents’ basement.” But when an anonymous source leaked three pages from Trump’s 1995 tax returns to The New York Times, they were suddenly much more interested.

The Hillary tapes were first released by The Washington Free Beacon on September 27, but the broadcast networks buried them until Sunday, then only providing a mere 2 minutes, 41 seconds of coverage. In contrast, all three pounced on the Trump tax documents as early as they could. From Sunday morning through Monday morning the Big Three had churned out a whopping 49 minutes 32 seconds of coverage – more than 18 times as much coverage. 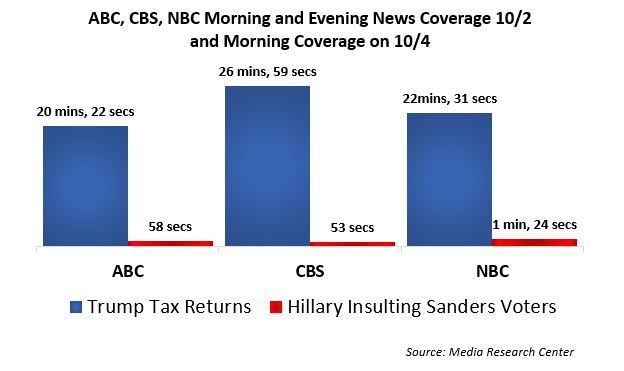 UPDATE: The broadcast morning and evening news shows continued to cover Trump’s Tax Returns, bringing the total up to 1 hour, 9 minutes and 52 seconds of coverage. However, only ABC's World News Tonight even mentioned Hillary insulting Bernie Sanders voters, bringing that total up to 3 minutes and 15 seconds. That means that to date, there has been 21.5 times more coverage for Trump’s taxes.

NBC’s Today on October 3 called the release of Trump’s tax returns a “bombshell.” On CBS This Morning on October 3, correspondent Major Garrett quipped that “the biggest headline might be that in the 1990s, Donald Trump was a spectacular flop as a businessman, but was able to use the tax code to build wealth anyway.” ABC weekend anchor Tom Llamas remarked at Sunday’s World News Tonight that “critics say he’s a tax dodger.”

On September 27, The Washington Free Beacon released audio of Hillary at a fundraiser in February making her remarks about Sanders supporters: “They're children of the great recession and they are living in their parents' basement. They feel that they got their education and the jobs that are available to them are not at all what they envisioned for themselves, and they don't see much of a future.” During that same fundraiser, she also claimed that she liked to stay “from the center-left to the center-right” of the political spectrum.