Newsweek's Alexander Nazaryan wildly claimed in a Thursday post on Twitter that "racist voter suppression" was the root cause of the statistical tie between Hillary Clinton and Donald Trump in North Carolina, according to recent poll. The senior writer didn't explain what he specifically meant by his statement, but it could be a reference to a recent lawsuit filed by the NAACP that alleges that several counties in the Tarheel State "disproportionately target[ed] blacks" when they purged their voter rolls. 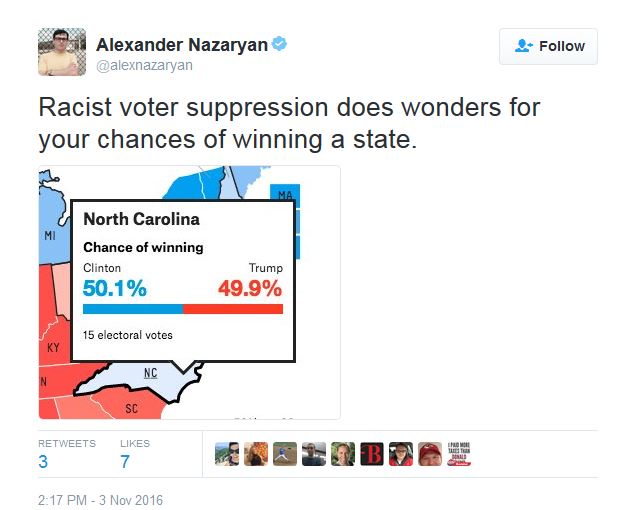 Nazaryan got into hot water earlier in 2016, after he likened Ted Cruz's campaign to the Nazis on Twitter. The liberal writer later deleted the Tweet, and said his smear was "not fair to his totally decent supporters, as much as dislike the man himself." He also revealed how far his "dislike" for the Texas senator went: "Ted Cruz is an atrocity of a human being."

Cruz isn't the only 2016 Republican presidential candidate that the Newsweek senior writer has targeted on Twitter. Just before he posted his slanted reaction to the North Carolina poll result, Nazaryan linked to a Tweet by CNN correspondent Ashley Killough, who reported that "Kellyanne [Conway] told reporters ahead of Melania's [Trump's] speech that one issue she would want to take on as FLOTUS is making social media more positive." He then added his snarky reaction: "Would she begin by banning her husband and his supporters from Twitter?"