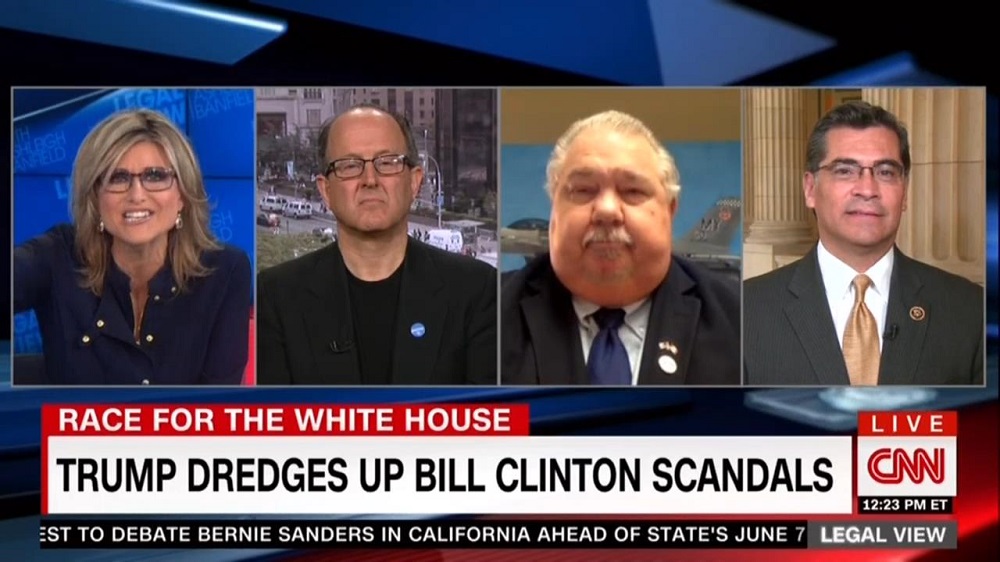 CNN's Ashleigh Banfield acted like a hired gun for Hillary Clinton's campaign on her Legal View program on Tuesday. Banfield claimed that Donald Trump "twisted" Bill Clinton's past sex scandals into an attack on Mrs. Clinton, and played up how he once stated that "Paula Jones is a loser, and people would have been more forgiving if Bill had had affairs with more glamorous women." She confronted Sam Clovis, Trump's national co-chair: "What are you doing in this campaign when it's Donald Trump who attacked the women; and you're going after Hillary's husband, who's not running for president?" [video below]

Ironically, minutes later, CNN's senior media correspondent Brian Stelter underlined that "it's incumbent on the news media to be very sensitive, I think, when covering these stories, because we don't want to do any campaign's dirty work for them — whether it's the Trump campaign or Clinton campaign or any others." This was moments after Stelter himself bemoaned that "it's almost as if Trump is the conspiracy theorist-in-chief; and even if there's other things you like about the candidate, it is troubling to see him repeat a lot of these conspiracy theories over and over again."

Banfield led into her hostile exchange with Clovis by playing a clip of Bernie Sanders blasting Trump for being "very good at insulting people and attacking people, but...has nothing to say about the future of this country." The guest replied to the CNN host by pointing to her coverage of a judge ruling minutes earlier that Bill Cosby has to stand trial for an alleged sexual assault. Banfield repeatedly interrupted him as he tried to connect the two issues:

ASHLEIGH BANFIELD: Sam Clovis, this question to you — this is going to be a tough one: much of the attacks against Hillary Clinton — saying that Bill Clinton has his behaviors in the '90s against women, which Donald Trump has alluded to as being shameful — he has also twisted into Hillary's reaction to those women. But it is really hard to find Hillary Clinton anywhere attacking any woman who was alleged to have had affairs.

I did find one instance, though, of an attack on the women — and I'm going to read it for you: 'Paula Jones is a loser, and people would have been more forgiving if Bill had had affairs with more glamorous women.' And that came from — you ready, Sam? Donald Trump. What are you doing in this campaign when it's Donald Trump who attacked the women; and you're going after Hillary's husband, who's not running for president?

SAM CLOVIS, NATIONAL CO-CHAIR, TRUMP CAMPAIGN: Well, I do think that it's important that you brought this up — because how'd you open your show? You talked about sexual predation of an individual, a high — high-visibility individual there — of sexual predation. You opened your show with that. Sexual predation—

CLOVIS: Are you going to let me talk or not?

BANFIELD: If you answer the question, yes—

CLOVIS: Are you going to interrupt me, or are you going to let me talk? All right? Really, you know, this is — you know, I'm really sorry that this is how this has turned out, because this is more like TMZ than it is talking about campaigns and the substance and why these particular tactics might be in play or not. Now, if we want to go down that road, I'm happy to do that, but I thought we were going to be talking about—

BANFIELD: I just want you to answer the question, Sam Clovis. You haven't answered it, and you've been on for 45 seconds already.

CLOVIS: I did. I was trying to answer the question and you won't let me, Ashleigh.

CLOVIS: Are you going to let me answer the question or not?

BANFIELD: I've had to prod you three times to answer it.

CLOVIS: Well, you keep interrupting. So are you going to allow me to answer, or do you want to let somebody else talk for a while?

BANFIELD: If you don't answer with Bill Cosby and answer the question: why is Bill — why is Donald Trump attacking Hillary Clinton's husband and suggesting that Hillary Clinton attacked the women that he is alleged to have affairs with; when it, in fact, was Donald Trump who attacked, saying Paula Jones is a loser?

CLOVIS: Well, he wasn't running for president in 2006 (sic) either. And so, the issue comes down to the overall character of the candidates; and I think we're going to see how this plays out. And right now, I think if you have a look at what we're doing, the lead agent of the —  advancing the notion of the war on women is Hillary Clinton; and she is — she can't have it both ways. Either she is or she is not part of this deal. And if her husband has been out and has — has been a sexual predator — has been documented over and over again — then perhaps, she has a role in some of this; and perhap,s there is some of this that she has to be able to say — can't have it go both ways. There's a blind spot or a bit of hypocrisy here, and I think we have to acknowledge that.

The host later brought up the issue with Stelter, who gave his "very sensitive" advice to his fellow journalists in covering how Trump brings up the past sex scandals of Bill Clinton:

BANFIELD: Brian, the issue has been that Donald Trump has been bringing up a lot of rumor; a lot of innuendo; a lot of those — you know, some people call them crazy e-mails from uncle Leo in Florida (Stelter laughs) that — that circulate constantly — former rumors — and suggest that they're true. But he brings them up; and then, he couches them by saying, 'I'm not saying this, but here's what people are saying.'

BRIAN STELTER: Right; right. This is a big difference from other presidential candidates — both this year; and also, in past years. It's almost as if Trump is the conspiracy theorist-in-chief; and even if there's other things you like about the candidate, it is troubling to see him repeat a lot of these conspiracy theories over and over again.

You brought up — in the last segment, you mentioned Paula Jones. Trump has been bringing up other accusers from Bill Clinton's past and trying to link Bill Clinton's behavior to Hillary Clinton. And it may be effective, in some ways, on the campaign trail; but it's incumbent on the news media to be very sensitive, I think, when covering these stories, because we don't want to do any campaign's dirty work for them — whether it's the Trump campaign or Clinton campaign or any others.

I think it's also an issue for voters and for viewers. You know, increasingly, all of us, when we're thinking about who to elect — even for lower-level positions or for the presidency — have to do our own research and check out what these candidates are saying. And, in Trump's case, he's repeating unproven conspiracy theories from the past that a simple Google search can verify are not true.