CNN's Bourdain In Vietnam: Obama's 'Chopstick Skills Are On Point'

CNN recently admitted that it's "no longer a TV news network," but that apparently isn't going to stop the network from setting aside some of its non-news air time to President Obama. Chef Anthony Bourdain sat down with the Democrat in a restaurant in Hanoi on Monday, and shot footage for an upcoming episode of his Anthony Bourdain Parts Unknown program on the cable channel. Bourdain posted a picture of his meal with the President on Instagram, and trumpeted that "the President's chopstick skills are on point."

The President's chopstick skills are on point . #buncha #hanoi

People magazine touted how "Bourdain had a very special dinner companion Monday night in Hanoi, Vietnam" on their "Great Ideas" blog, and gave their post a click-bait headline: "President Obama Dined with Anthony Bourdain in Vietnam — Guess Who Picked Up the Check." The unsigned article spotlighted how "when word of the President's appearance got out, people flocked to catch a glimpse of one of the world's most famous faces." It also played up that "President Obama has had many culinary adventures while in office, and this one looked especially fun."

The anonymous author didn't answer the headline's question until the final paragraph: "So, who paid? That would be Bourdain, 'Total cost of bun Cha dinner with the President: $6.00,' he tweeted. 'I picked up the check.'" 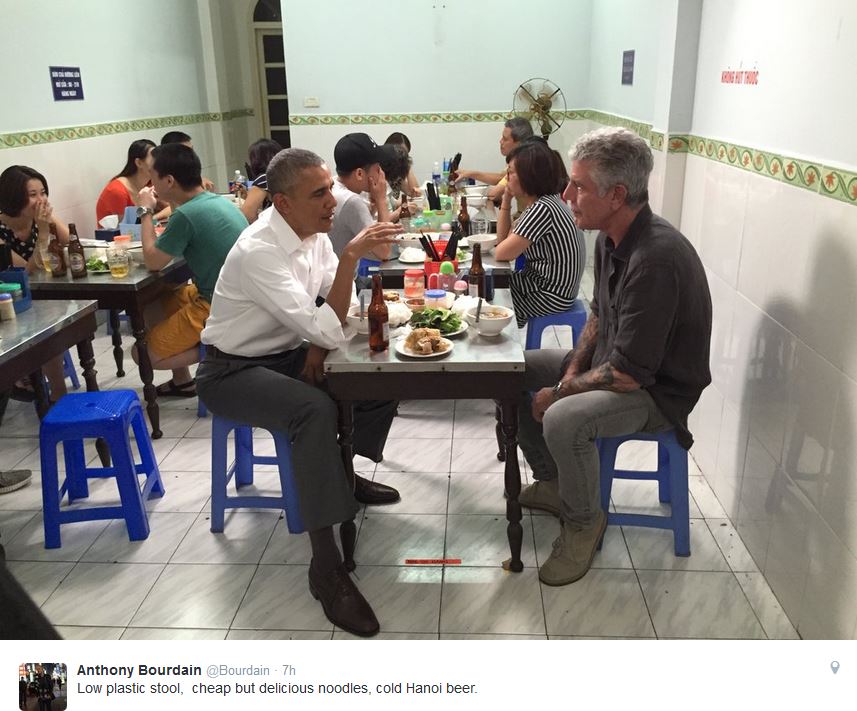 CNN's own write-up on the presidential meal in Vietnam pointed out that Obama's "meal with Bourdain offered a brief break from an emotionally and politically weighty schedule that began with the announcement that the U.S would lift a decades-old lethal arms embargo on Vietnam." Correspondent Gregory Krieg also highlighted that "Obama's soon-to-be televised appearance alongside an occasionally gory gourmand will not be a first -- the President in 2015 was a guest of Bear Grylls on 'Running Wild'. Among their culinary samplings: the gnawed remains of a piece of Alaskan Salmon left behind by a peckish bear."

One wonders if Bourdain will fawn over the President as Grylls did. During the episode of Running Wild with Obama, the TV host spotlighted that he had "read somewhere that what you've done with your climate change plan is the most significant thing any single human being has ever done to protect the planet. And that's amazing. 'Cause there are so many skeptics out there."