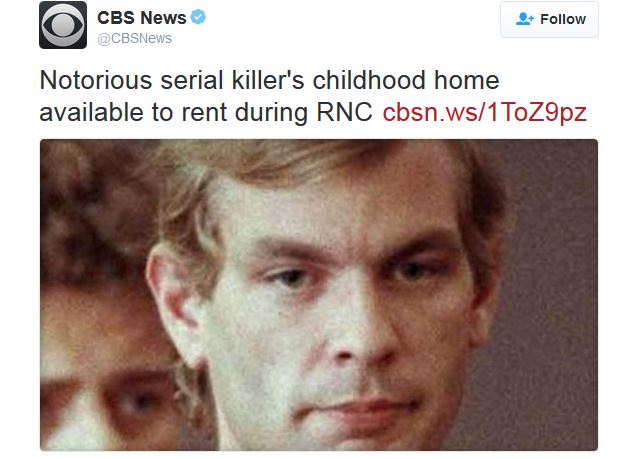 On Friday, the Associated Press oddly spotlighted that the childhood home of an infamous serial killer is available for rent to those attending the Republican National Convention in Cleveland, Ohio. The unsigned short article, which was promoted by CBS News's Twitter account (see screen cap at right), reported that "the former Bath Township home of Jeffrey Dahmer is one of several private properties that real estate company Howard Hanna has made available for rent while the convention is underway in Cleveland in July."

The anonymous author of AP's write-up outlined that "the three-bedroom home about 25 miles south of Cleveland costs $8,000 to rent for the week." It is also "the site of Dahmer's first murder in 1978. Then just 18, Dahmer killed hitchhiker Steven Hicks and disposed of his remains in the woods behind the property."

The house is owned by Chris Butler, who helped found the rock band The Waitresses (best known for two hits from the 1980s: "Christmas Wrapping" and "I Know What Boys Like"). Butler played up that "if you get past that little problem, you'll have a wonderful place to live." The musician also revealed to the Akron Beacon Journal that he listed the property in order to "'suck some Republican gelt from those people,' using the Yiddish word for money."

In the longer article in the Beacon Journal on Thursday, Butler admitted that "he doesn't hold out great hope for a taker. If someone does rent the house, he said, he'll either stay with friends or take a long-delayed trip to Europe." The songwriter also apparently "coyly declined to identify his political affiliation," according to interviewer Mary Beth Breckenridge.