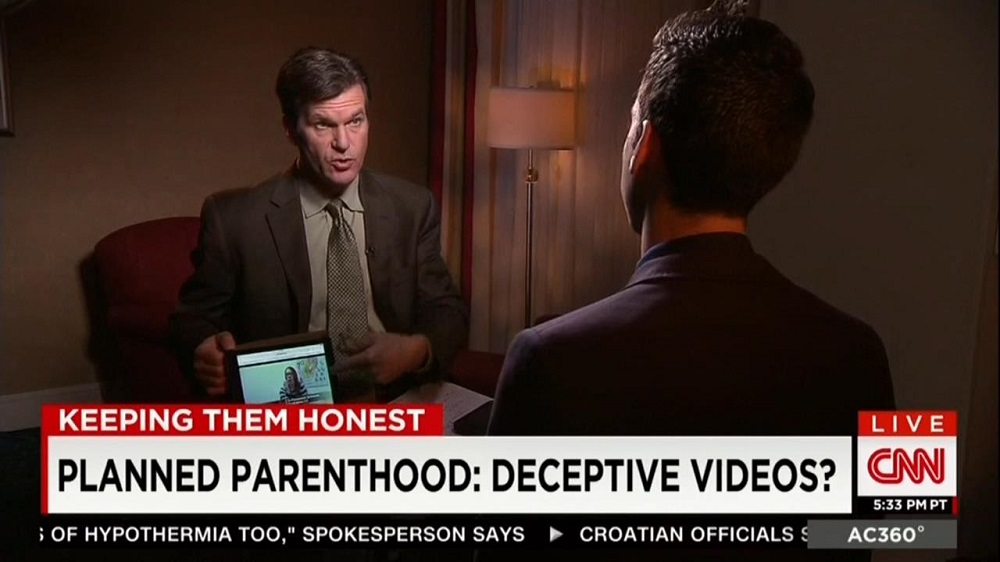 On Monday's Anderson Cooper 360, CNN's Drew Griffin hounded David Daleiden of the Center for Medical Progress over his insertion of outside footage into his undercover videos that targeted Planned Parenthood's sale of aborted babies' organs and tissue. Griffin underlined to Daleiden that "the problem people are having is, that this is not an aborted child...that does seem very deceptive to me." He also played up that "the confusion of David Daleiden's sloppy edits has made its way into the Republican presidential race." [video below]

The correspondent did also press Planned Parenthood Vice President Dawn Laguens over the "other parts of the tape that do seem to show bargaining, negotiating, pricing, and arranging the sales of body parts." When host Anderson Cooper wondered whether the videos were "heavily edited," as Laguens claimed, Griffin replied, "the only thing we found were these pictures that came out of nowhere that were dropped in."

Copper led into the journalist's report by noting that "there's new fallout tonight from those undercover videos released by an anti-abortion group. Texas officials said today they are cutting all Planned Parenthood clinics statewide from the state's Medicaid program, because of violations documented, they say, in those videos...Planned Parenthood officials are blasting the decision — saying, as they have all along, that the videos are heavily edited; and, they say, misleading."

Griffin first zeroed in one of the Center for Medical Progress video that features former StemExpress employee Holly O'Donnell. As O'Donnell described "holding that fetus in my hands when everybody else was busy, and started crying," the video cuts to a still image of a dead second-trimester baby. The CNN correspondent pointed out that "there's a problem: the baby Holly O'Donnell is talking about is not the baby shown in the video. The filmmaker pulled an image off the Internet." He turned to the mother of the baby who posted the picture on the Internet who "had no idea the photo would be inserted into a documentary to make a political point."

The journalist then question Daleiden over the still image, as well footage he inserted in another video featuring O'Donnell:

DREW GRIFFIN (on-camera): So we hear Holly talking about holding this baby.

DAVID DALEIDEN, CENTER FOR MEDICAL PROGRESS: Holding a baby — yeah, that was born alive in a Planned Parenthood clinic — yeah.

GRIFFIN: Is that this baby?

DALEIDEN: No; no. That's just an illustration of the — of the same age — the same gestation age fetus.

GRIFFIN: The problem people are having is, that this is not an aborted child, and this is not the baby that Holly is talking about, and that seems very — that does seem very deceptive to me.

DALEIDEN: This is a late second trimester intact fetus, which is exactly the kind of fetus Holly O'Donnell is describing holding. And why—

GRIFFIN: Except this isn't that example. This is a stillborn child....and doesn't this leave the door wide open for the critics who want to — who you knew are going to come after you?

DALEIDEN: The only people who have raised that criticism are — first, it started with Planned Parenthood and their allies, and some of the pro-abortion blogs. And then, it migrated to some of the mainstream media outlets. But apart from that, no one else has seemed to be confused by it or deceived by it.

GRIFFIN (voice-over): That is not true. The confusion of David Daleiden's sloppy edits has made its way into the Republican presidential race.

GRIFFIN: In the second Republican debate, an impassioned Carly Fiorina made this attack on Planned Parenthood — citing this video clip of another baby in Daleiden's documentary, again with Holly O'Donnell providing the narration.

O'DONNELL (voice-over): Its nose was very pronounced. It had eyelids. And its mouth was pronounced. And then, since the fetus was so intact, she said okay, well, this is a really good fetus.

DALEIDEN: Not just an image — a video.

GRIFFIN: Where did it come from?

DALEIDEN: That video is from an organization called the Center for Bioethical Reform. They are one of the largest repositories of abortion images and abortion videos in the world, I think—

GRIFFIN: So you don't know where that came from?

GRIFFIN: Or the date?

DALEIDEN: I don't know the exact location or the date. I know that that's footage from CBR from their abortion images archive.

GRIFFIN (voice-over): The Center for Bioethical Reform would not release any detailed information either. The center claims it was an aborted fetus, and that they paid for the video.

GRIFFIN (on-camera): This is — this is actually what Carly Fiorina was talking about, right? This is that video. But you can't tell me right now if this was even at a Planned Parenthood facility.

DALEIDEN: It doesn't matter; it doesn't matter. It's only there as an illustration of the sort of born-alive, late-term fetus that Holly O'Donnell is talking about.

DALEIDEN: Right; right. And that's — and this specific sequence right here with Holly O'Donnell is talking about an infant that was born alive in a Planned Parenthood clinic that they then harvested the brain from. And so—

GRIFFIN: Only, once again, not this baby.

Griffin avoided strong language such as "very deceptive" during his interview of Laguens. However, he didn't back down when the Planned Parenthood vice president tried to explain away the behavior of one of abortion giant's officials in one of the videos [video below]:

DAWN LAGUENS, VP, PLANNED PARENTHOOD: All of the tape and footage that David Daleiden has released out into the world has been heavily edited, and I think pretty thoroughly discredited.

GRIFFIN: Dawn Laguens is executive vice president at Planned Parenthood, and discrediting the misuse of video was easy. But we asked her about the other parts of the tape that do seem to show bargaining, negotiating, pricing, and arranging the sales of body parts — like in this exchange where Planned Parenthood's Dr. Mary Gatter appears to be in negotiations over the sale of fatal tissue samples.

UNIDENTIFIED WOMAN (off-camera, from Center for Medical Progress hidden camera video): What I want to know is, what would — what would work for you? Don't lowball it; tell me what you really—

GRIFFIN (on-camera): Okay. So that sounds like negotiating of prices. What is it?

LAGUENS: One, we don't know, because again, these tapes are extremely heavily edited. And what you think — no—

GRIFFIN: But that portion was not edited.

LAGUENS: Actually, let me just say, $75 — this is a person, a doctor — a fabulous doctor who does great care for women — who wouldn't, in an affiliate, be the person anyway who would tell you what the reimbursement costs that were allowed under the law would be. She's somebody they got to come to lunch, and they start asking her to guess about what would be a proper reimbursement. Now, they've all introduced the word—

LAGUENS: Yeah. But she doesn't know what the cost of FedEx would be. She's guessing, and she said I used to work somewhere else and it was another amount. So she's just trying to ask them what is it that you pay other people as an allowable amount under the law — because these people, were they real, would not be able to pay somebody more than the reimbursement costs that are allowed by the law.

GRIFFIN (voice-over): That's important for Planned Parenthood to say, because it is illegal to sell fetal tissue samples for profit.

GRIFFIN (on-camera): So just to wrap it up, just so I'm perfectly clear: the position is there may be some money transferred, but you're saying that's to reimburse costs.

LAGUENS: Yes, which is allowed by the law, and all that Planned Parenthood affiliates would ever desire.

GRIFFIN: And are those rates in any way negotiated by the individual clinics?

LAGUENS: They would be based on the actual individual and unique costs of the clinics, so there should be—

GRIFFIN: So the answer is yes—

LAGUENS: Or could be a small amount of variation in the cost, but they would not be vast, and they would be in certain categories.

A shorter version of Griffin's report, which featured clips from his interview of both Daleiden and Laguens, also aired the following morning on Tuesday's CNN Newsroom.