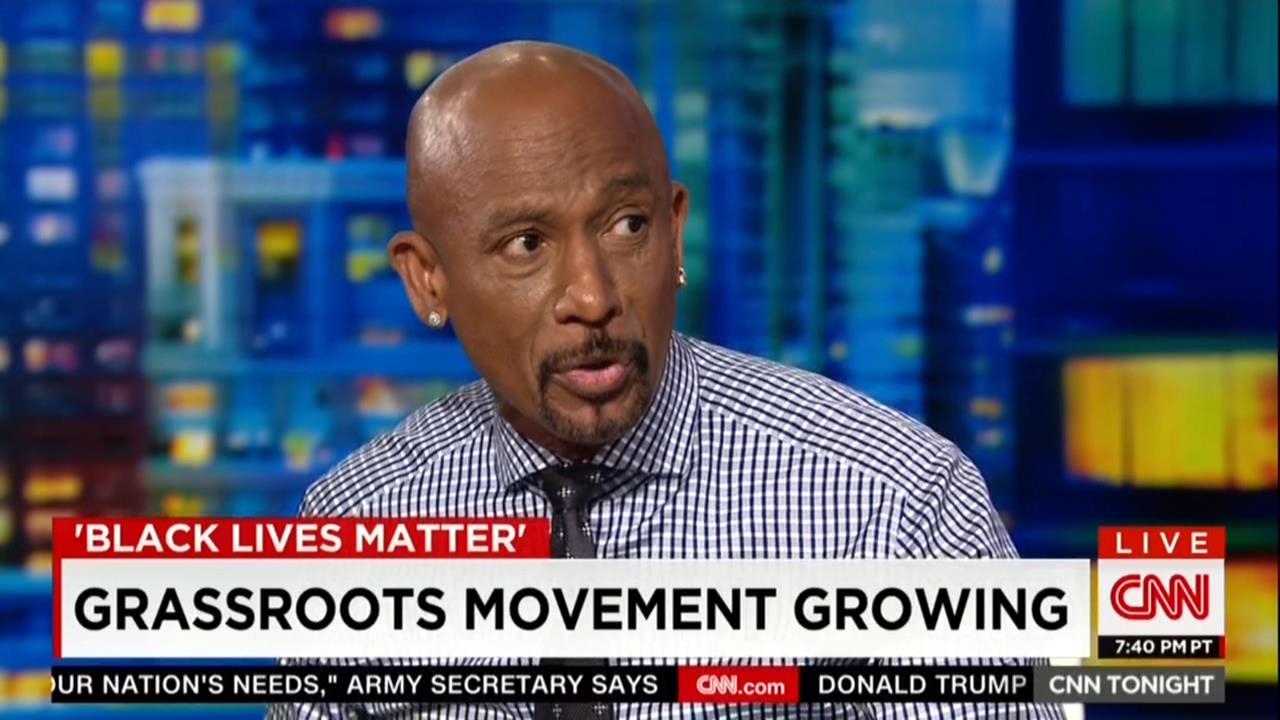 Montel Williams targeted 'Black Lives Matter' activists on Wednesday's CNN Tonight, especially in the wake of the anti-police "pigs in a blanket; fry like bacon!" chant that its protesters recently used in Minnesota: "The rhetoric is being ratcheted up way too high in 'Black Lives Matter.' And we ought to ratchet it back down, and come up with solutions." Williams later criticized the left-leaning movement for not paying enough attention to black-on-black murders: "I would love to see this whole movement turn to 'Black Lives Matter' – hell, yeah! – in my neighborhood to me!" [video below]

Host Don Lemon first asked the talk show host about a panel discussion segment earlier in the hour that featured a "Black Lives Matter" member. Lemon defended his handling of the guest: "I wasn't being disrespectful to the young man. I want to...what the end game of 'Black Lives Matter is...and how they achieve it?" Williams replied that "if you're going to protest, you need to listen on the other side and see if there are any answers coming back your way. I'm so sorry. I mean, I get it. I understand the frustration. I understand the anger. But that's what this whole country is built on right now – is anger. Why do we have to play into more anger?"

Williams then launched his blunt critique of the "Black Lives Matter" movement:

MONTEL WILLIAMS, TV HOST, ACTIVIST: When there's a march – and you were right – we said on the break that – you know, the rhetoric is being ratcheted up way too high in 'Black Lives Matter.' And we ought to ratchet it back down, and come up with solutions.

WILLIAMS: No, but I think we should do – if I'm the person who controls the rally, I should be able to determine the tenor of my rally. And if I can't do that, I might ask you to not attend the next time. Why can't I do that?

LEMON: Do you think that we have reached a tipping point in this country when it comes to the mistrust between police officers and citizens – and African-Americans in this country?

WILLIAMS: No. I'm going to tell you something. I'm so sorry I'm going to say this. I mean, people get really angry – I mean, when I do say this. In the last four years – the stats bear it out – the truth of the matter is – right now in the country, the single leading cause of death to African- American males, between the age of 15 and 34, is homicide. And that's not committed by cops! Ninety-three percent of this are committed by us, on us. So, at some point in time, I would love to see this whole movement turn to 'Black Lives Matter' – hell, yeah! – in my neighborhood to me! Why am I not rallying every morning, and saying to other people who will shoot five people tonight in Baltimore; seven people in Chicago; ten in Detroit – stop that! You point the finger in the wrong direction all the time – the fingers coming back might not be the ones you want to see. I'm just saying.

Lemon was rendered speechless by his guest's reply, and admitted as much: "This is the first time I've been speechless." The CNN anchor briefly touched on how "police brutality...and the way that police treat people of color are (sic) different," but then he and Williams disclosed that they were grateful for the service of police officers:

LEMON: I live directly across from a police station. I'm happy that those police officers are there. And when I see them on the streets I say, 'Hello, officer – thank you for your service' – because I am happy that they're there.

WILLIAMS: If I find something I can give to – police officer, stay on the line. I'll buy them a cup of coffee. A lot of times, I don't want to do that-

WILLIAMS: I will buy them a cup of coffee.

Near the end of the segment, Williams did something he did on two of his previous appearances on CNN Tonight: decry the four-year imprisonment of Marine veteran Amir Hekmati by the Iranian regime:

LEMON: Something that's near and dear to your heart – let's talk about Iran. What do you want to talk about?

WILLIAMS: Oh, look, you know that Amir, right now, is still – we have not talked about this in a while. Amir Hekmati has been in prison now for four years, folks. That's 1464 days. He recently just reached out to his family, and we know that there is something wrong. He is ill. They can detect it in his voice-

WILLIAMS: Something needs to be done. I'm not discussing the Iran deal – please get off it. We still have hostages-

WILLIAMS: We have prisoners being held.