Let's stipulate: George Santos running for Congress on a carpet of lies is beneath contempt. As Tulsi Gabbard, subbing for Tucker Carlson, said to him: "do you have no shame?"

But that doesn't mean that the Democrats, with a big helping hand from the liberal media, won't try to exploit the situation for their political gain.

And so it was that Morning Joe was only too glad to play its part today. The show invited on Democrat Congressman-elect Jared Moskowitz of Florida. Moskowitz has tweeted that, in contrast with Santos, he actually does have relatives who were victims of the Holocaust.

Moskowitz scalded Santos's lies about having Jewish relatives who escaped the Nazis as "the lowest form of humanity." Fair enough.

But Moskowitz then proceeded to try to turn the situation to his party's political advantage, predictably trying to blame Santos on Republicans in general, and Donald Trump in particular.

Moskowitz said that Santos's lies were:

"Not surprising, unfortunately, because this is what folks on his side of the aisle have learned. They have learned this from, you know, the leader of their party. That you can traffic in these lies and you can get away with it." 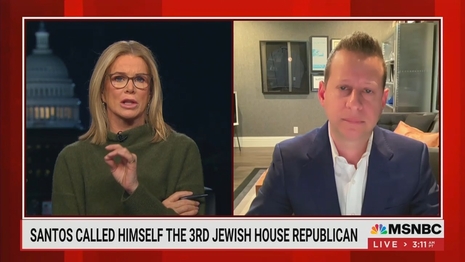 It remains to be seen whether either Trump or Santos will "get away" with things. But it's a certainty that the Democrats will try to milk the scandal for all its worth.

Guest host Katty Kay didn't challenge Moskowitz's accusation against Trump and Republicans. To the contrary, she could be heard murmuring in assent as he spoke.

Here's how you know today's booking of Moskowitz has a very political flavor. Try to find any time Jared Moskowitz appeared on MSNBC over the two-plus years he served as the Ron DeSantis-appointed director of Florida's Department of Emergency Management.

You won't find one. Just like CBS's 60 Minutes somehow couldn't include Moskowitz opinions in their nasty 2021 DeSantis hit piece on COVID vaccine distribution. Democrats aren't used to defend Republicans. That would somehow be bad journalism.

On Morning Joe, a Democrat Rep.-elect trying to tie the George Santos scandal to Donald Trump was sponsored in part by Sandals and Consumer Cellular.

KATTY KAY: Democratic Congressman-elect Jared Moskowitz from Florida is just one of the loudest voices calling Santos out about his lies about his religion.

In a tweet, Moskowitz wrote, quote, "Lying about your family almost being gassed in showers or being put in ovens in order to win an election is the lowest form of humanity. And I say that as someone whose grandmother was part of the kinderstransport out of Germany from the Holocaust."

Congressman-elect Moskowitz joins us now. Congressman-elect, thank you very much for joining us. Your great-grandparents were killed in Auschwitz. Your grandparents barely escaped Europe on the kindertransport there. What do you make of what Santos is claiming about his heritage?

And in a piece with his stance of trafficking in lies, is that he has family members that escaped the Holocaust. And so, you know, the idea that there's someone out there, someone who now serves in Congress, who thought electorally it would be significantly advantageous to him that he would come up with a lie that he had family members close to him, his grandparents, escape one of the world's greatest tragedies, it's just the lowest form of humanity.

But not surprising, unfortunately, because this is what folks on his side of the aisle have learned. They have learned this from, you know, the leader of their party. That you can traffic in these lies and you can get away with it.