As Biden Turns 80, Don Lemon Laments: US Doesn't Honor Elders Like Other Countries!

During the last presidency, CNN hosts like Don Lemon routinely insisted Donald Trump was mentally unfit for office, and then would compare him to a six-year-old. On Monday's CNN This Morning, Lemon greeted Joe Biden's 80th birthday by lamenting anyone who would question President Biden's mental fitness as he turned 80 on Saturday.

"What about the respect for elders thing that we talk about? Because we treat, I think, our elderly people not -- we don't support them and honor them as much as other countries."

That teed up the segment's guest, a geriatric medicine specialist named Audrey Chun, to say:

"I think one of the biggest challenges we face is ageism, right? It's kind of the ism against your future self. That we don't have a culture in the United States that celebrates getting older."

A clip was played from Jonathan Capehart's Sunday show from last month that we covered, in which Biden tells Capehart: "I can't even say the age I'm going to be. I can't even get it out of my mouth. I can't. I swear to god. It's like, no. Come on, that can't be true."

As you'll see in the screencap, Biden faced Capehart and put both hands on his shoulders. Seemed like an invasion of Capehart's personal space. At least Biden didn't sniff Jonathan's hair. 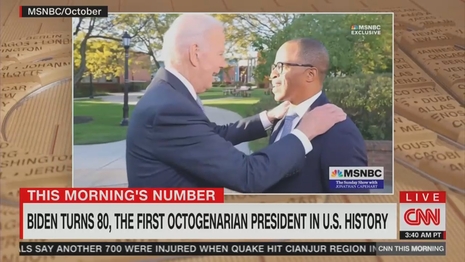 The most noteworthy moment of Capehart's interview came when Biden seemed to nod off at one point, and Capehart had to jar him back awake, saying, "Mr. President?" Incredibly, Capehart cut that moment out of his segment on the Sunday show!

Clips were also played of Biden acknowledging that his age was a legitimate issue, but claiming he's fit for office so long as he can run up the steps of Air Force One, and challenging people, regarding his mental acuity: "watch me."

If you insist, Joe!

Running up the steps of Air Force One? Check!

Here's a thought, Don. Since you mentioned that your 80-year-old mother is still "really, really sharp," why not tell Biden to retire, and let Mom run in '24?

Note: To its credit, the show did roll the iconic clip of the 1984 presidential debate in which R 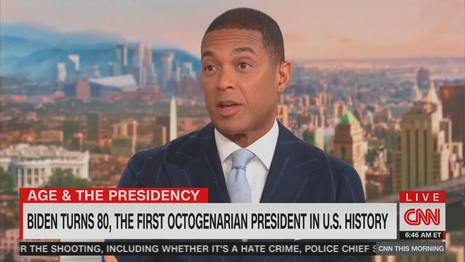 "I will not make age an issue of this campaign. I am not going to exploit for political purposes my opponent's youth and inexperience."

On CNN This Morning, in a segment on Biden turning 80, Don Lemon lamenting that the US doesn't honor elders like other countries do, was sponsored in part by Whole Foods and Infiniti.

KAITLIN COLLINS: President Biden made history over the weekend, becoming the first octogenarian to occupy the Oval Office. He quietly celebrated with a private brunch with his family at the White House. As he turned an age that has he joked that he can hardly say.

COLLINS: The milestone 80th birthday has renewed attention on the president's age, given Biden said recently he does plan to spend the next few months talking with his family about whether to follow through on his stated intention to seek a second term, at the end of which he would be 86. Biden himself has said it's legitimate to ask about his age.

BIDEN: It is a legitimate issue. Sure it is. And I think people are going to judge it, if I were to going to run, I think they would judge me on my vitality. Can I still run up the steps of Air Force Two [the clip was from 2018, when Biden was VP], am I in good shape, do I have all my faculties, am I energetic? I think it's totally legitimate for people to ask those questions.

[From interview with Jonathan Capehart] I think it's a legitimate thing to be concerned about anyone's age, including mine. I think that's totally legitimate.

COLLINS: So, it's fair to ask, but Biden also has an answer ready to go for those who question whether or not he's fit to serve, often reminding his critics about his schedule and his energy level.

REPORTER: What's your message to them?

COLLINS: Questions about a president's age are not new, as this moment with President Ronald Reagan on a debate stage in Kansas City in 1984 can tell you.

RONALD REAGAN: I will not make age an issue of this campaign. I am not going to exploit for political purposes my opponent's youth and inexperience.

POPPY HARLOW: Let's bring in Dr. Audrey Chun, she is a geriatric medicine specialist and a professor of geriatrics at Mt. Sinai Health System. Morning to you.

HARLOW: So he said, Biden says, as long as I can run up the stairs of Air Force One, judge me on what you see from me, not just a number. Is that right? I mean, how different can 80 be for folks?

DON LEMON: I was going to say, not all 80-year-olds are created equal. I just had an 80th birthday party, surprise party, for my mom. It was like, you're going to throw an 80-year-old a surprise birthday party? She's totally fine. She's younger than us. She's up, it's five. She's up early in the morning, she texts us every morning: good morning, morning crew!

LEMON: And she's really, really sharp. But not all 80-year-olds are so sharp.

CHUN: That's exactly right. So, we live in a wonderful age right now to get older, because we are living longer and living better. So, so many people are living to 80 and having a great physical function and thinking clearly, but not everyone does. So there is, there really is variability. You're at higher risk of developing some of these conditions as you get older, but not everyone gets them.

LEMON: What about the respect for elders thing that we talk about? Because we treat, I think, our elderly people not -- we don't support them and honor them as much as other countries. Is there, it's a little bit difficult sometimes to talk about these issues, and to speak of a president that way.

CHUN: I'm so glad you brought that up. I think one of the biggest challenges we face is ageism, right? It's kind of the ism against your future self. That we don't have a culture in the United States that celebrates getting older.

You know, like, my family is from Korea, and there, sometimes people lie about their age to be a litle bit older, you know, to get a little extra respect, right? So all of that comes into play as to how valued you are in a society.