Shameless Hack Don Lemon Doubts There's Any 'There, There' In House's Probe of Hunter Biden

Just before the presidential election, the New York Post broke bombshell stories, derived from Hunter Biden's laptop, indicating that he was trading influence with his father for big paydays from companies in Ukraine and China. And that on at least one of the deals, 10% of the payments had been earmarked for "the big guy," which one of Hunter Biden's partners has said was a reference to Joe Biden.

But—after the election—the Washington Post and the New York Times admitted that the information on Hunter's laptop was authentic—not Russian disinformation.

So . . . you'd think that Don Lemon would have the journalistic integrity to acknowledge that a congressional investigation into the matter is very much justified, and indeed, necessary.

But no. On today's CNN This Morning,  CNN's Pamela Brown reported on her interview with Rep. James Comer, the Republican chairman of the House oversight committee, who will be leading the investigation. Comer indicated that although Joe Biden will not be subpoenaed, this will be an investigation of the president.

And Lemon concluded the segment by scoffing at the importance of the investigation:

"The American people are dealing with a lot of things. I'm not sure this is one of them." 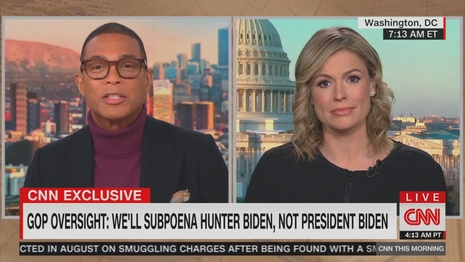 Right. Because who cares if the sitting President of the United States had been profiting from his son's influence-peddling?

You can laugh at Pamela Brown suggesting there are "challenges for Republicans in investigating a sitting president, as they try to tie him to his son's business dealings." They really expect CNN viewers to forget that CNN was red-hot obsessed with the Democrats probing Donald Trump Jr. on any Russian collusion.

Then she added "We should note, a spokesperson for the White House Counsel's office for the Biden White House said that this is a politically motivated attack, chock full of conspiracy theories."

And Russian collusion was what?

On CNN This Morning, Don Lemon doubting whether there's any "there, there" in the House's investigation into Hunter Biden's business dealings and possible ties to Joe Biden was sponsored in part by Etsy, Whole Foods, and Verizon.

DON LEMON: In the meantime, we're going to talk about what is happening in Washington now. Now that they'll take control of the House, Republicans are aiming right at President Biden and his family. Watch this.

JAMES COMER: In the 118th Congress, this committee will evaluate the status of Joe Biden's relationship with his family's foreign partners, and whether he is a president who is compromised or swayed by foreign dollars and influence. I want to be clear, this is an investigation of Joe Biden. And that's where the committee will focus in this next Congress.

LEMON: Well, James Comer, the top Republican on the oversight committee, telling CNN the committee will subpoena Hunter Biden but not the president. CNN anchor and senior Washington correspondent Pamela Brown is here. She spoke with him about the committee's plans, she joins us. So Pamela, good morning to you. What did Comer tell you?

I sat down with James Comer, the incoming chairman of the oversight committee, and he told me point-blank that the committee has no plans to subpoena Joe Biden. And he underscores the challenges for Republicans in investigating a sitting president, as they try to tie him to his son's business dealings.

If they don't give you the information, you would then use subpoenas. But are there any discussions, plans, to eventually subpoena Joe Biden and/or his son, Hunter Biden?

COMER: Well, I mean, if I were Hunter Biden, Pam, I would want to come before my committee, and prove my innocence. You know, 'cause I said some things today that we should be very concerning to Hunter Biden.

BROWN: Why, then, would you not subpoena Joe Biden if this is all about Joe Biden?

COMER: Well, tt's complicated to subpoena a President of the United States.

BROWN: Well, it has been done.

COMER: It has been done, and the Democrats sent out subpoenas like junk mail. And that's why it's hard to get people to come in.

BROWN: So he claims that he wants to be more disciplined with subpoenas. Of course, time will only tell if that will happen. And we should note, a spokesperson for the White House Counsel's office for the Biden White House said that this is a politically-motivated attack, chocked full of conspiracy theories. Don?

BROWN: Yeah, I asked him point-blank if is this is the settling scores because Republicans were unhappy with what Democrats did with Donald Trump. Now, he says no, it is not. It has nothing to do with that. Even if Democrats hadn't investigated Trump, this would still be happening.

But I pressed on whether this was really the mandate from voters. Of course, as you know, Don, the midterm elections were all about economy, inflation, economy, crime. Of course this
has nothing to do on that.

And so I pressed him on whether this is really what voters want? Will this improve their daily live? And he said, look, 92% of the Republican conference is not on the oversight committee. And soo they're going to be focused on those other issues that are clearly top of mind for voters, and that this will be a focus of the oversight committee. And he also said they're going to walk and chew gum at the same time, so that they'll be looking at other issues as well. Don.

LEMON: The American people are dealing with a lot of things. I'm not sure this is one of them. But we'll see. Thank you, Pamela Brown. We appreciate it.