Joe Scarborough is such a Biden sycophant that he will try to twist even Ol' Joe's most disastrous decisions into something positive.

On today's Morning Joe, Scarborough accomplished that dubious feat with regard to what was the worst, most catastrophic, decision of Biden's presidential tenure to date: the precipitous withdrawal he ordered of all US troops from Afghanistan. In addition to the deaths of 13 Marines, Biden's decision led to the virtually immediate retaking of the country by the Taliban, the terrorist outfit that harbored al Qaeda in the period leading up to 9/11.

The morning after the announcement of the killing via CIA drone strike of al Qaeda head Zawahiri, it was the very return of al Qaeda into the welcoming arms of the Taliban, subsequent to the Biden-ordered withdrawal, that Scarborough sought to spin in a positive light. Talk about putting lipstick on a pig!

"Ironically enough, it was the United States leaving Afghanistan that had the head of Al Qaeda comfortable sitting in an apartment in Afghanistan where we could find him and take him out." 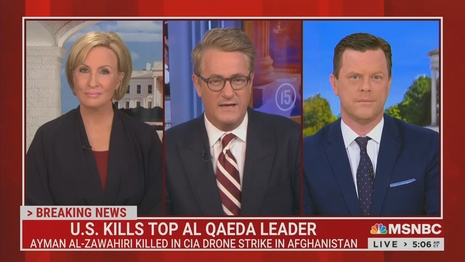 Scarborough had to admit that when ordering the withdrawal, Biden hadn't foreseen that felicitous finale for Zawahiri. Sycophantic chutzpah has its limits, even for toadies like Scarborough.

In the wake of the Taliban's virtually instantaneous takeover of the country one year ago -- something Biden had said would take a long time, "Taliban forces pledged not to allow Afghanistan to become a base for terrorists who could threaten the West."

How'd that work out, Joe?

Morning Joe opened with a bizarre mash-up of Biden and Obama solemnly vowing retribution against terrorists, in which the one seemed to complete the other's sentence. Naturally, the show omitted the most famous, heartfelt, spontaneous, iconic, such pledge of all: the one President George W. Bush made, standing on the still-smoking ruins of the World Trade Center, just days after 9/11, his arm draped around a firefighter:

"I can hear you. The rest of the world hears you. And the people who knocked down these buildings will hear all of us soon."

Compare and contrast the vibrant Bush, speaking spontaneously, with the enfeebled Biden slurring his way through a canned statement. Which one do you think sent a message of strength and determination to friend and foe alike?

On Morning Joe, Joe Scarborough seeing the bright side of Biden letting Afghanistan fall to the Taliban in that it let Zawahiri feel comfortable there so we could kill him, was sponsored in part by GlaxoSmithKline maker of Nucala, Discover, and Allstate.

BARACK OBAMA: We will never tolerate security being threatened.
JOE BIDEN: If you are a threat to our people --

OBAMA: we will be relentless in defense of our citizens.

BIDEN: The United States will find you, and take you out.

OBAMA: Tonight we give thanks to the

OBAMA: Finally, let me say to the families who lost loved ones on 9/11

OBAMA: We have never forgotten your loss.

BIDEN: May God protect our troops and all those who serve in harm's way.

OBAMA: And may God bless the United States of America.

MIKA BRZEZINSKI: More than 20 years after 9/11, and a decade after the killing of Osama bin Laden, the U.S. takes out the terrorist leader who helped plan that attack and others against
Americans, with President Biden declaring the mission a, quote, total success.

JOE SCARBOROUGH: [Zawahiri] really was the center of al Qaeda and their terror campaign against America. And, finally, finally last night, I, I, I never thought it was going to happen because it seemed that we killed every other leader in al Qaeda through the years. Finally last night he was brought to justice. And brought to justice in a very disturbing location. In, in, in the capital of Afghanistan, where the Taliban, make no mistake of it, our enemies, the Taliban, once again sheltering an al Qaeda leader.

WILLIE GEIST: Yeah, right in the heart of a wealthy neighborhood, by the way, of Kabul in Afghanistan. It would be like if he was sitting out on his balcony on the Upper East side on Fifth Avenue or something, and a drone strike took him out.

SCARBOROUGH: Willie, it really is incredible, what, what we've been able to do, what the CIA has been able to do through the years in bringing so many of these terrorists to justice. It is fascinating, though, there you have the same man that withdrew troops from Afghanistan, something that I was against. I was against giving up Bagram Air force base. I still think we need to peacefully repatriate it, but we'll save that for another day.
And what did we hear? We left Afghanistan, and now the terrorists are going to be able to run wild in Afghanistan. Now al Qaeda is going to be able to form, reform in Afghanistan.