Eugene Robinson's Untimely Metaphor: Boris Became PM By 'Knifing' Rival 'In the Back' 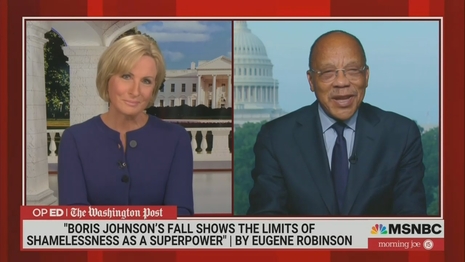 Mark this down as the year's most grotesquely insensitive metaphor.

On Friday's Morning Joe—hours after the news broke that former Japanese Prime Minister Shinzo Abe had been assassinated with shots to the back—Washington Post columnist Eugene Robinson, in a scathing statement about Boris Johnson, said:

"He sort of failed up, upward through his career until he became Prime Minister after knifing Theresa May in the back."

Robinson added "And, you know, you, so his, his rise was, was like that, and, and his fall is being accompanied by quite a bit of glee among a lot of his enemies." Robinson, and the liberal media at large, are among those enemies. So much so that it didn't even occur to Robinson how utterly tasteless and inappropriate was his metaphor.

Note: Count Mika Brzezinski as another Johnson enemy reacting with glee to his political downfall. We caught her on Thursday gloating over his impending resignation, and casting it as a sign of the demise of conservative populism worldwide.

The Prime Minister rose to power on the crest of a populist wave that led to Brexit's passing, Donald Trump's victory, and the rise of right-wing populist figures across Europe!

With Johnson's collapse, Trump's post-election woes are only accelerating by the day. And with Marine Le Pen's crushing defeat in France, the rise of right-wing populism in the West may soon be limited to the confines of cable-news hosts and a dwindling number of dim-witted representatives in Congress.

A dwindling number of dim-witted representatives in Congress? Did Mika perhaps have in mind the number of Democrats she expects to remain in the House after the midterms?

MIKA BRZEZINSKI: Eugene, your latest op-ed for the Washington Post, is entitled, "Boris Johnson's fall shows the limits of shamelessness as a superpower." Interesting, what is happening there, and what the limits are there, compared to here!

EUGENE ROBINSON: Yeah, yeah. I mean, we haven't found our limit yet.

ROBINSON: We're still deep into, into the, the shamelessness era of our politics.

MIKA: We'll get there.

ROBINSON: But Britain finally had enough of Boris Johnson's antics. I remember Boris when I was London bureau chief of the Post --

ROBINSON: -- and he was Brussels correspondent of the. of the, the Daily Telegraph. And, he basically made stuff up. I mean, he, he, he, he did. He just made stories up, got 'em on the front page, became kind of a star. He would find some little germ of truth or half-truth, and then concoct a whole sensational story about, about the dastardly Eurocrats and what they were doing to, to little England.

And, and, and he sort of, you know, failed up, upward through his career until he became Prime Minister after knifing Theresa May in the back. And, you know, you, so his, his rise was, was like that, and, and his fall is being accompanied by quite a bit of glee among a lot of his, his enemies.

It's interesting, the Conservative party was willing to go along with Boris, much as the Republican party had been willing to go along with Donald Trump, as long as, as long as, the Conservatives were winning. But I think the major factor here is, it's not that Johnson was -- had become a different person. He was the same person he always was, scandal after scandal, lie after lie, but the Conservatives, the party, was falling apart. It was so far down in the polls, finally, the party had had it. And they realized that with Johnson as leader, they were, they were going to suffer a crushing defeat.

JOE SCARBOROUGH: I was going to say, there's no profiles in courage in the Tory party. Some people asking why this would happen in Britain but not the United States. Because it served the politicians, the Tories, the Conservatives in Britain. It served their own political interest to turn on Johnson. Many Republicans in this country have not yet reached that conclusion, which is why, right now, obviously, we seem to be in a bit of a transition. Perhaps this is the future fate of Donald Trump with, with conservatives -- well, not conservatives, with Republicans. But we shall see.