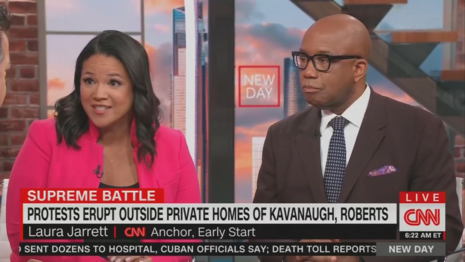 Substitute host John Avlon actually tried to frame the conversation around where the line should be drawn when it comes to protests, but Jarrett would have none of it.

"I think for a lot of people, a conversation about civility feels like it misses the mark when constitutional rights that you believe that you had for over 50 years are about to be overturned."

"The Justices have security," she sniffed. This sounds similar to her mother Valerie Jarrett saluting the "energy" of protests that erupted in Ferguson back in 2014 after Michael Brown was shot after reaching inside a car window for a cop's gun. They were focusing on the "post-Ferguson anger."

Again sounding an objective note, Avlon asked if people's opinions would be different if Republicans were staging protests outside the homes of liberal Justices. CNN's Errol Louis said the principle would be the same, "although people would react differently." People like Laura Jarrett, presumably! And Louis himself said the protests were "a good idea."

Avlon closed the conversation by suggesting that protests cross the line when they involve families -- as protests outside the homes of Justices do.

Note the contrast in coverage between CNN and MSNBC's Morning Joe. Before Avlon's segment, co-host Brianna Keilar gave a short but straight-up report on the firebombing of the pro-life center in Madison, Wisconsin. She included a mention of the threat spray-painted on the center: "If abortions aren’t safe then you aren’t either.”

But at least in its first hour, Morning Joe completely suppressed the story of the attack on the Madison pro-life center.  If over the weekend, an abortion clinic had been similarly attacked, and a slogan spraypainted reading, "if babies aren't safe, then neither are you," do you think Morning Joe might have found time in its first 60 minutes to report it? Yeah.

On New Day,  CNN's Laura Jarrett saying a conversation about civility "misses the mark" when it comes to protests outside the homes of conservative Supreme Court Justices was sponsored in part by Johnson & Johnson, maker of Aveeno, Subway, and ADT.

BRIANNA KEILAR: In Madison, Wisconsin, a fire at an anti-abortion office that also lobbies against same-sex marriage is being investigated as arson. Investigators say the fire at the Wisconsin Family Action office was called in early yesterday morning. No injuries were reported. Police say vandals also struck the office, graffiti written on the wall of the building reads, "if abortions aren't safe, then you aren't either."

ERROL LOUIS: I think what you see Chuck Schumer trying to do is rally the Democrats, the Democratic base in particular, around the idea that important rights could be lost. You've got to get out here and you've got to vote Democratic. Will that actually do it substantively, will it actually work? Very hard to say.

JOHN AVLON: The flip side of that, Laura, though, is the protests. And, this is a question about civility. The frustration people feel is personal, but where's the line? Obviously, what we see, the apparent arson at an anti-abortion nonprofit in Wisconsin is over the line. Violence is always over the line. But the real questions and conversations today about protests outside Supreme Court Justices houses, particularly Justice Kavanaugh. Where do you think that line is?

LAURA JARRETT: I think for a lot of people, a conversation about civility feels like it misses the mark
when constitutional rights that you believe that you had for over 50 years are about to be overturned.

The Justices have security. So far, all of the protests have seemed overwhelmingly nonviolent. There are plenty of protests that happen every single day in this country, around the country, at abortion clinics, blocking women from getting into clinics. And we don't cover those as if they're four-alarm fires.

And so, yes! There are going to be protests in front of Kavanaugh's house. Because people are angry, and as long as they stay nonviolent, I think for most of the people who are watching it, you can understand where they're coming from, even if you may think politically it's not the right thing, you can understand sort of where that animated feeling is coming from.

AVLON: Errol, what about trying to apply equal standards? You know, if there were Republicans protesting outside liberal Justices and the tenor got hot, do you think it would be the same principles at play, or would some people be having a different opinion?

LOUIS: It is the same principle, although people would react differently.

I think it's also important to keep in mind that the credibility of the Court is also where some of this points to, right?

LOUIS: I mean, when you look at some of the polling, the support for the Court has fallen to really all-time lows over the last few decades.

And the protests happen because protests work! You know, it's not like, you know, they are human beings. They notice when people are screaming outside their house, outside their workplace--the Court itself. They try to follow the media. They may be watching right now.

JARRETT: That's why they set up barricades!

LOUIS: Exactly right. There's a reason they let people in while doing their arguments, you know. So the protests, I think, are probably a good idea. I believe very deeply in civility and the ability to have a civil discourse, and it's important there be guardrails on this. It's one thing to protest from a distance. How close you get—the details really do matter.

AVLON: But not targeting personal lives, or particularly families. I think that's an important line. I understand this is personal for people. People are frustrated. But, I think in the public debate, in the public square, there's a line between the public and the private, particularly as it relates to families, and I did want to highlight that.