Joe Scarborough began today's Morning Joe with an act of repentance to the lords of the left, screaming, "what was I thinking?" after admitting he had been a Republican for years.

He then argued that the likeliest scenario is that the draft Supreme Court opinion overturning Roe v. Wade was leaked by a "fanatical" person on the "hard right" who was trying to prevent any of the Justices who had signed onto the draft from drifting away from Alito's opinion. John Heilemann helpfully agreed with Scarborough, saying he would put money on Scarborough's take as the likely explanation.

MSNBC Republican Elise Jordan then proclaimed that "hell has frozen over," because she agreed with Ted Cruz that the leaker was probably someone on the left.

Oh, the temerity to disagree! She argued that if someone on the right had leaked it to keep, for example, Justice Kavanaugh from straying, that would likely have backfired. But Jordan also suggested, without naming names, that the leaker might have been the "spouse" of a SCOTUS Justice. Scarborough jumped on that, naming names, speculating about Ginni Thomas as another possible leaker. She's a "fanatical" advocate on the "hard right" in the view of the MSNBC bubble. 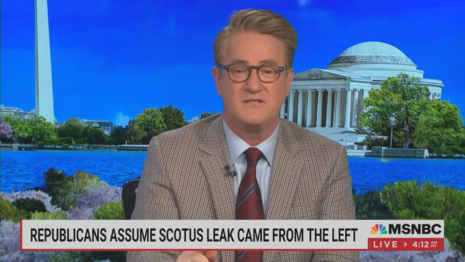 Scarborough committed some unintentional humor when he revealed that he and Jonathan Lemire had been talking to "court observers," people who follow the Court, and that they favored that theory that the leaker was a conservative trying to "nail down" a Justice who was moving away from the Alito opinion.  Gee, wonder who those "Court observers" might have been? Nina Totenberg and who else?

PS: Lawyer Will Chamberlain has a Twitter thread guessing the leaker was a Breyer clerk.

On Morning Joe, Joe Scarborough suggesting that the leaker of the draft SCOTUS opinion overturning Roe v. Wade was a "fanatical, far-right" Court clerk was sponsored in part by Clear Choice and DirecTV.

JOE SCARBOROUGH: I'll be honest with you. I know them. I, I, I, I, I was in the party for years. [Screams] What was I thinking it?!! But these people, these are the same people, that stood and gave standing ovations to Ginni Thomas and Clarence Thomas. How quaint that Ginni Thomas's ideological brothers and sisters are delivering lectures on how the left wing [chuckles] has politicized the court. You can believe that BS? Suggesting that the left would be more likely to leak the draft opinion, cause they don't respect the court or its rules. Oh, really? Oh, like Clarence Thomas being involved in cases that directly impact his wife and her text messages?

If only the left could show the restraint of Ginni and Clarence Thomas, Lindsey Graham and the rest of the GOP. Oh, what a wonderful, wonderful, wonderful world it would be. The plotting argument, that Alito's majority had no reason to leak the court's decision assumes it was still the majority. Three months after it was written in February! It's more likely that somebody on the hard right was really pissed off that a Justice moved away from Alito's really harsh, right-wing diatribe on abortion. And instead, moved more towards Roberts' way. It was a classic, hey, we've got the receipts, buddy! We've got -- don't even think about moving away from Alito and taking a more nuanced, reasonable path. Cause we have the receipts.

And you know, maybe that may be why the Chief Justice's statement started with a declaration that the leaked document, quote, does not represent a decision by the court or the final position of any member on the issues in this case.

You know to me, I could be wrong, maybe Ted's right, maybe I'm wrong. But if you are just looking at this in the most Machiavellian way possible, it makes far more sense it was a fanatical law clerk on the right who leaked a document to stop one of the conservative members of the Court from moving away from Alito's position, and closer to Roberts' more nuanced path, toward a still radical destination.

John Heilemann, you hear all of this, all of this rambling on from the far right yesterday. And you know, when it first broke, I said, oh, okay, somebody's pissed off on the left. And then I actually stopped and thought for a second, and said, wait a second, that's not what's  happening. I want to talk to Jonathan Lemire in a second because Jon and I had a discussion. We talked to people close to the Court. And most Court observers, people who follow the court and know how the court works, were telling Jon and me throughout the day, this looks like somebody was moving away from Alito's harsh position. And they were trying to be nailed down, by holding up this February opinion going, look, look, it's done. This right-wing turgid, opinion on, on abortion. This is going to be the law of the land. Don't even think of moving away from this position. And so, they leak this at the same time the concurrences, which is the time period we're in now, the concurrences are supposed to start to going around. And this is when John Roberts starts working on Kavanaugh. This is when John Roberts starts working on Amy Coney Barrett, and says listen, we're all conservatives here, but we also have to protect the institution, guys. Let's sit down and talk. What say you, John Heilemann, regarding my 15-second question.

HEILEMANN: Look, I think -- in my experience, there are different kinds of leaks motivated by different kinds of -- by different kinds of motives. If this is a strategic leak, or a tactical leak, whatever you want to call it, a leak with purpose, the likelihood that it's a leak as you suggest by someone on the right who, maybe not angrily, maybe not angrily, but in a very kind of cold, calculated way, saw happening what you're talking about. I think much more likely that it would be Kavanaugh than Coney Barrett. But could be either one of those. And that the prospect of upholding the Mississippi law, but ending up with a concurrence -- a plurality opinion written by Alito with three Justices signing on to it. And then Roberts writing a concurring opinion with two Justices along the line, you're talking about, which would take away the force of Alito's position. He would not have a majority opinion that was governing the case. And so you would validate the Mississippi law, but not overturn Roe v. Wade. That some conservative decided to do this from keep that from happening. To keep a fracturing from happening on the right. I think there's a very plausible theory.

There are leaks that I have heard of in our business, and maybe I've been, I've had the benefit of at various times, where people acted in irrational and emotional ways. People just get mad. And if that's the case, it's more likely to have been a clerk on the left. But if you ask me where I would put my money, today, I think I'd be more likely put it on a cold, calculating conservative clerk, than on an enraged, blindly enraged, left-wing clerk in that situation. And I guess, what I'm trying to say is, Joe, the two words you like best of all -- you're right.

WILLIE GEIST: Okay, Elise, you've been listening patiently. We heard yesterday Mitch Mcconnell. We only played a bit of that, he said again and again and again when asked about the fallout, the ramifications of overturning Roe v. Wade. You all are focused on the wrong thing. The story today is a leak. The story today a leak. He was offering a lecture to the journalists in the room. You've been in the government, you know how things work, what do you think.

ELISE JORDAN: Hell has frozen over, because I agree with Ted Cruz, somewhat.

GEIST: Write down the date and time.

JORDAN: I can't believe that I'm saying that, but I think that we're getting a little too cute here and too complicated. And you look at the timeline of this, it's been a couple months. How many people have access to this draft? Four or five clerks per Justice. Some admin staff. Probably under 100 people. That's still a fair amount of people. This isn't treated like a classified document. The op-sec is not that great.

It could be a spouse. There are many possibilities. We just don't know. But the idea that a conservative would do it to pressure Justice Kavanaugh seems to -- that just seems a good way to really backfire and get Justice Kavanaugh to dig in on his original position. So if this person, if that was the intention, then I would say it stands a chance of backfiring. But I really think it's not that complicated, and we kind of need to keep it simple here.

SCARBOROUGH: Wow. I'm shocked by a couple of things here, Elise. But I want to touch on the part -- something you said that I wrote down here. Because you say that it could have been a spouse of a member of the Supreme Court. Do spouses on the Supreme Court actually get involved with this kind of thing?

JORDAN: You know that was an interesting theory that was floated to me yesterday that I hadn't even thought about, because there wouldn't be -- this isn't like a classified document that it's against the law to show someone. You wouldn't think that a spouse would see an opinion. But, it's like paperwork. If it's something you carry --

SCARBOROUGH: Like Ginni Thomas. Yes, exactly. Well, so, there you go. There's a possibility, too.