On Morning Joe, Lefty Brit Journo Sees 'Beginning of the End' for Facebook

An ironic political dynamic surrounds Facebook. On the one hand, the company and its leaders tilt hard to the left. More than 91% of employee contributions during the 2020 cycle went to Democrats. Going back to 2018, CEO Mark Zuckerberg donated $100 million to a "pro-immigration" group. And COO Sheryl Sandberg donated $400,000 to the Hillary Victory Fund.

But while conservatives have their beefs with Facebook, by far the fiercest criticism of Facebook comes from the left, which accuses the platform of not having done enough to censor pro-Trump postings and what it sees as right-wing conspiracy theories.

Within the liberal media, Morning Joe has been a leader of the anti-Facebook gang. The show renewed its crusade this morning, prompted by allegations by former Facebook employee Frances Haugen, who testified before a Senate committee Tuesday.

Morning Joe today brought on Carol Cadwalladr, an investigative reporter for the left-wing UK paper, The Observer. In 2016, she began a series of articles on what she called the "right-wing fake news ecosystem."

Cadwalladr has been a fierce critic of Facebook. During her Morning Joe appearance, Cadwalladr openly rooted for Facebook's demise, saying:

"I think, there's some very, very serious trouble coming for Facebook . . . I do think we could be witnessing something of the beginning of the end . . . I don't want to jinx it, but maybe there is some sort of reckoning coming."

And Mika lamented that there are insufficient "checks and balances" on the ability of people to get information from Facebook.

The normally even-keeled Richard Haass of the Council on Foreign Relations joined the anti-Facebook brigade, calling it nothing less than corrosive "to democracy everywhere in the world." 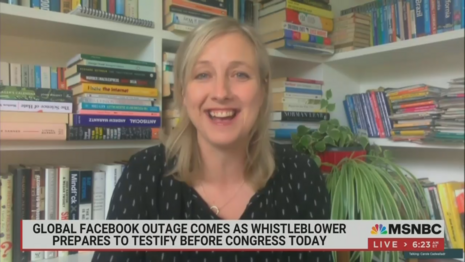 Notes: Cadwalladr had an odd habit of interjecting laughs into her anti-Facebook diatribe [see screencap]. They weren't Kamala-like cackles, but inappropriate nonetheless given her dead-serious antagonism toward Facebook.

And Mika described being horrified to have met a "really nice couple" who told her they got all their news from Facebook, including "the most unbelieveable conspiracy theory." Mika said she met the couple "up in New England—in the country." Ah, in the country. Couple of them thar New England rednecks!

Morning Joe's anti-Facebook segment, in which British journalist Carol Cadwalladr foresaw the "beginning of the end" for Facebook, was sponsored in part by Johnson & Johnson, maker of Neutrogena, Clear Choice, and Sleep Number.

MIKA BRZEZINSKI: Let’s bring reporter and feature writer for the Observer, Carol Cadwalladr. She exposed the scandal surrounding Facebook and consulting firm Cambridge Analytica in 2018. If you haven't seen her Ted Talk, which really takes you through the dangers and how they spread and how pervasive they are, take a look at that.

CAROL CADWALLADR: I think, I think, there's some very, very serious trouble coming for Facebook down the line.

JOE SCARBOROUGH: I'm just wondering, you've been covering this and following this for so long. Do you feel like there may be a sense of reckoning, finally? That justice—justice!— that justice may finally be served on Mark Zuckerberg, Sheryl Sandberg, and the rest of the Facebook board for what they have done to this country and the world?

CADWALLADR: I mean, Joe, on this program, you have done so much to cover the issue. As you say there are academics, there are critics, there are journalists, whistleblowers, who have been saying exactly this. And it has been water off the dust. You can never say never. I think these issues with the SEC are very serious. I am really, actually, do think we could be witnessing something of the beginning of the end . . . I do think that there is maybe, Joe: I hate to say, I don't want to, I don't want to,  to jinx it. But maybe there is some sort of reckoning coming.
. . .

MIKA: I was up in New England, in the country. I met a really nice couple who were telling me the most unbelievable conspiracy theory. We talked more, and I asked, how do you, where did you get this? Facebook. Where did you get all your news? Facebook! They get all their news from Facebook.

It has become a distortion to the way information flows into our society, with no checks and balances. Do you think this will be the tipping point?

RICHARD HAASS: It's too soon to predict a tipping point, and it’s corrosive to our democracy.

HAASS: Not just our democracy, but democracy everywhere in the world. It’s dangerous to people’s health. The tobacco comparison is becoming more and more common now. So I think the real question is, you can’t stop people from going there. The question is can you improve things like public education? Can you provide alternatives so Facebook operates in a more competitive environment?