Barnicle Absolves Biden of Blame: 'It Was Always Going To End In Chaos and Death'

Barnicle thrice claimed that "it was always going to end this way," in "chaos and death." Translation: it was inevitable. Don't blame Biden. Nothing he could have done better. Move along.

Asked to comment, retired Admiral James Stavridis, an NBC/MSNBC analyst, played it both ways. He said that on the one hand, "the tactical situation you see unfolding was not inevitable," but then added, "I think strategically, Mike Barnicle is exactly right."

But it is exactly Biden's tactics that are being criticized here. If Biden hadn't withdrawn the military before US citizens and Afghan allies were evacuated, if Biden hadn't set the unrealistic August 31st deadline, much of the chaos and death might have been avoided. 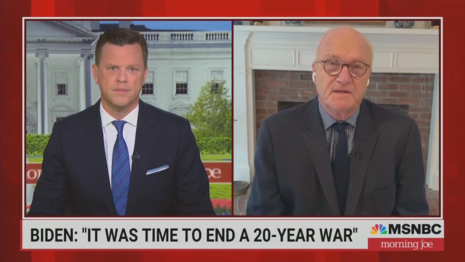 Note: To his credit, Willie Geist seemed to express skepticism as to the inevitability of the horror we witnessed yesterday. You'll hear the skepticism in his voice as he asks Stavridis: "Was this inevitable? Really? Was this really inevitable?"

Mike Barnicle attempting to absolve President Biden of blame for yesterday's terrorist attack that killed 13 American service members and scores of Afghans was sponsored in part by AARP and Discover.

WILLIE GEIST: Mike, what did you think as you heard the president yesterday? He was asked repeatedly about his decision to get out, about setting this deadline, which some people have said is an artificial deadline, but didn’t waiver off his argument despite the horror of yesterday.

MIKE BARNICLE: Willie, I was thinking, I think, the same thing that many people in the Pentagon, many people who have had their hands on Afghanistan policy over the 20 years past were thinking. And that is, it was always going to end this way. It was always going to end in chaos and death . . . This mission is over, because the capacity of the enemy on the ground there, this is not walking through an airport through metal detectors, this is an enormous crowd of danger, filled with danger. And if they start rocketing the runway at the Kabul airport, making it impossible for planes to leave or take off [sic, presumably "land or take off"], then we’re in a truly horrific position. But sadly, this was always the way it was going to end.

GEIST: Admiral Stavridis, we've heard that from President Biden as well, that this was inevitable. That’s been rejected by some people who said, yes, there might have been chaos but we wouldn’t have seen the level of chaos we’ve seen around the airport in the last couple days, live pictures at 3:00 in the afternoon, by the way, from Kabul airport as those evacuations continue. So from your point of view as a commander, did it have to be this way? Really? Was this really inevitable?

JAMES STAVRIDIS: The tactical situation you see unfolding was not inevitable. I think strategically, Mike Barnicle is exactly right.