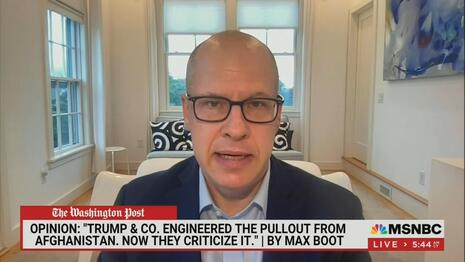 Does it make Max Boot feel big to tell a former President of the United States to "shut up?" The Washington Post columnist and Never Trumper did just that on today's Morning Joe.

In his recent Washington Post column, Boot argued that neither Trump, nor Mike Pompeo nor Mike Pence, have any right to criticize Biden's handling of the Afghanistan withdrawal since they set it in motion.

Mika Brzezinski teed up Boot by quoting former Trump National Security Advisor H.R. McMaster recently saying, "our Secretary of State [Pompeo] signed a surrender agreement with the Taliban. This collapse goes back to the capitulation agreement of 2020. The Taliban didn't defeat us. We defeated ourselves."

Boot summed up his position by trumpeting:

"People like Trump and Pompeo just need to find a good opportunity right now to just shut up and stop criticizing something that they set in motion."

Yet Boot admitted that Biden has "very badly bungled" the withdrawal. Whatever Trump's responsibility for setting the withdrawal in motion, certainly he and others are entitled to criticize Biden's inept handling of it. Nobody stopped Obama from criticizing Trump after he suggested ISIS was a "JV team." CNN and MSNBC wanted more Obama criticism of Trump, always more.

Boot doesn't seem ashamed to pontificate although the Al Jazeera types think he's a horrible neocon who should shut up and go to "disgraced pundit purgatory."

Joe Scarborough seconded Boot's position, saying that only people who criticized Trump's withdrawal plan are now entitled to criticize Biden's botching of it.

MAX BOOT: I mean, it’s — you know, we really redefine chutzpah for Donald Trump, and Mike Pompeo and Mike Pence to suddenly be claiming that they’re outraged by the horrors of the U.S. withdrawal from Afghanistan, because they’re the ones who set this in motion

They set this in motion, and they have no right, no standing whatsoever right now, to criticize what is happening. And, you know, badly as it’s been going, and it’s improving a little bit, but it’s been, obviously, a very badly bungled execution. But I don’t think anybody who watched the incompetence of the Trump administration over four years could possibly imagine that Donald Trump would have handled this any better.

JOE SCARBROROUGH: There are a lot of Republicans in Congress that criticized Donald Trump for trying to make peace with the Taliban. They have room to talk right now. But you [referring to people who supported Trump's withdrawal plan], as a 100% Trump apologist, you have no room to talk.

BOOT: Right. And people like Trump and Pompeo just need to find a good opportunity right now to just shut up and stop criticizing something that they set in motion.

These are the folks that sent the airplane into a nose dive and they can’t now be criticizing the crash that occurred subsequently.