ABC Roughs Up Biden on Afghanistan—'Adrift From The Facts'

ABC's This Week roundtable today was rather rough on Biden's Afghanistan fiasco.

Leading the charge were host Martha Raddatz and senior national correspondent Terry Moran. Raddatz called Biden's claim that our allies haven't questioned America's credibility "not particularly true." Moran took it a step further, saying "it's not true at all."

Moran went on to cite a number of foreign leaders who have criticized Biden, including former British PM Tony Blair, who called Biden's withdrawal "imbecilic." Moran also commended a speech by Conservative UK MP Tom Tugendhat, a veteran of the Afghan war, who scalded Biden's criticism of the Afghan military as "shameful."

Even Michel Martin of NPR suggested that Biden's reputation would take a hit, saying that his initial comments showed "a lack of empathy" for those suffering as a result of his "botched operation."

And at the end, Martin said her concern was that the situation will help recruitment by white nationalist groups, who have made refugees a central issue. 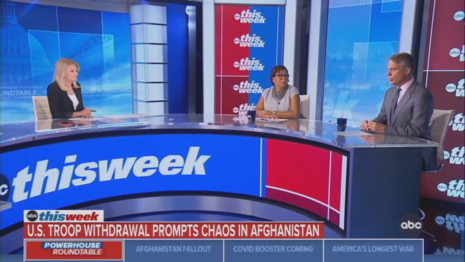 America does have a moral obligation to the Afghans who bravely aided our effort in Afghanistan. But you don't have to be a white nationalist to have concerns about Afghan refugees. Have a look at this column by the wife of the US ambassador to Afghanistan under George W. Bush, entitled, "I've Worked with Refugees for Decades. Europe's Afghan Crime Wave Is Mind-Boggling." She documents a hugely disproportionate number of sexual assaults in Europe being committed by Afghan refugees.

Bonus Coverage: Another mark of how the liberal media has been surprisingly critical of Biden's mishandling of Afghanistan came on NBC's Sunday Today. Chuck Todd, of all people, called Biden's withdrawal of the military before evacuating civilians a "catastrophic decision." Video at tweet.

The roundtable on ABC's This Week giving Biden a rough time on his Afghanistan fiasco was sponsored in part by Procter & Gamble, maker of Crest, Verizon, Gillette, Flonase, and Walmart.

MARTHA RADDATZ: Terry, I know you and I both immediately noticed when President Biden said that our allies had not questioned America's credibility, but that was not particularly true.

TERRY MORAN: It's not true at all. And the president does seem adrift from the facts in a lot of ways right now. One way is that. We had two former Prime Ministers of Great Britain, our closest ally, Theresa May and Tony Blair, condemn this operation, condemn his leadership, in the starkest terms imaginable. Tony Blair called it an "imbecilic" withdrawal. I can't remember anything like that. And that speech by a Conservative member of Parliament, Tom Tougendhat, that's going around that one should listen to. He's a veteran of the Afghan war. He speaks about the United States with a bitterness, and even a level of contempt, that I can't imagine has been heard in the British Parliament in decades, if not centuries.

RADDATZ: How much does Joe Biden's reputation suffer in this?

MICHEL MARTIN: I really do think this has complicated our picture of Joe Biden considerably . . . He has shown a stiff-necked quality that I just think a lot of people don't associate with him . His initial conversations demonstrated a lack of empathy for a person, who -- look, everybody who's covered Joe Biden has a story like this, where he's called their mom when they were late or something, or giving his phone number to kids [?!], people suffering through illnesses. And yet, this is the same person who's demonstrating, as Terry pointed out, a sort of separation from the facts about the realities that we can all see, and, seemingly initially at least, a lack of regard for the suffering that this botched operation has caused.

RADDATZ: And Stephanie, I want to come back to you on that, and particularly that Consoler-in-Chief. During George's interview with him I was just stunned when George asked him about those Afghans clinging to the airplane who had fallen to their deaths. And he just bristled and said that was four or five days ago.

[Turning to Moran] Where do you think fingers should be pointed?

MORAN: Well, the buck stops in the office with no corners, right? In the Oval Office. And Joe Biden says that. But he really isn't taking responsibility . . . He did have advance warning to some extent that the situation was deteriorating. Certainly over the last several weeks, that dissent cable that went to Secretary of State Blinken, where guys on the ground in Kabul wrote the State Department, said this thing could fall by the end of August.

RADDATZ: We may not have known how fast it would happen, but I can't, it's hard for me to believe they didn't have some expectation this would happen, since they knew we were pulling out.

MARTIN: I'm sorry, but doesn't operational effectiveness land a little bit lower than the Oval? I mean, yes it's true that the president sets the broad outlines of the direction. But there have been a lot of people who have been in office who had their responsibilities longer than Joe Biden has. It seems to me the planning for this could have started a year ago in the prior administration. Where was that?

But I'll tell you what I'm concerned about, and Craig, you also have expertise in this area, one of the concerns I have is, what does this do for recruiting of white nationalist groups? I mean, this has been one of their core issues, is refugees, and a sense of Americans losing their identity and their sense of potency, both at home and abroad. And I just think this is a very fraught time for the country.