Promoting mass immigration is the standard for journalists across the liberal media. No wonder, then, that the New York Times has published a major front-page story about the problem of falling birth rates, suggesting that salvation lies in -- you guessed it -- promoting immigration!

Damien Cave, lead author of that Times article, was a guest on today's Morning Joe. His conclusion was that the countries that will do the best in the future are those that are "friendlier" to immigration.

Financial Times editor and Morning Joe regular Ed Luce took things a step further, suggesting that the solution is to open the immigration "floodgates," bemoaning that there is no political consensus to do so. Meanwhile, Democrats are, of course, endeavoring to do just that!

That same Times article envisioned countries "laying out huge bonuses for immigrants." Again, Democrats are angling to do that, proposing eligibility for the full panoply of welfare programs for immigrants, legal and illegal alike. Andrew Cuomo's New York is leading this dubious parade, offering "payments of up to $15,600 to undocumented immigrants who lost their jobs" during the coronavirus pandemic. 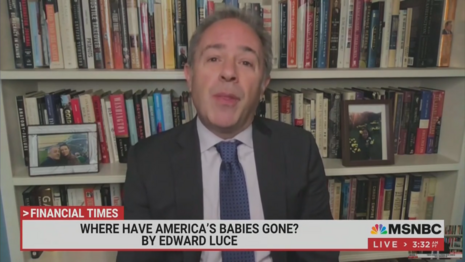 Of course, it wasn't that long ago that liberals were largely Malthusians, warning of the dangers of overpopulation. In his best-selling book, The Population Bomb, Stanford Professor Paul Erlich predicted that by the 1980s there'd be worldwide famine due to overpopulation. He advocated various measures to limit population growth.

That the left can be so utterly wrong about a worldwide trend should be a cautionary tale for them when it comes to another worldwide issue: "global warming." But of course it won't be. Algore and his acolytes will continue to warn that the point of no return is just around the corner. A corner that never seems to come.

MIKA BRZEZINSKI: We want to turn now to a story from the front page of the New York Times yesterday that has important implications. It’s fascinating, about research showing the global population rate is slowing down at a concerning rate. Reading from The Times report, quote, "Like an avalanche, the demographic forces pushing toward more deaths than births seems to be expanding and accelerating. Though some countries continue to see their populations grow, especially in Africa, fertility rates are falling nearly everywhere else. Demographers now predict that by the latter half of the century or possibly earlier, the global population will enter a sustained decline for the first time."
. . .

JOE SCARBOROUGH: Damien, a final thought to you.

DAMIEN CAVE: Yeah, I mean, one of the things I think it's important to recognize is that these projections and numbers are all dependent on people’s actions. There was a period of time where no one ever imagined that population growth would come to an end. And so, what we’re seeing now is the result of different policies and different reactions.

And so, a lot of demographers I talked to said, listen, the destiny, it’s not a given. How this plays out is up to us. And so, the countries that are likely to succeed are the ones that are frankly friendlier to immigrants, because at some appoint, there's going to be competition for immigrants. And friendlier to young families. And so, to some degree, the 21st century will probably be defined by the countries that do best with those two issues.