'MSNBC Republican' Elise Jordan: You Have To Work Hard 'To Be More Loathed Than Ted Cruz'

As an "MSNBC Republican," Elise Jordan well knows that her bread is buttered on the side of bashing conservatives. Jordan dutifully carries out her assigned role, reliably ripping non-Never Trumper Republicans.

Jordan no doubt scored bonus brownie points with the MSNBC suits and Morning Joe hosts Friday. Because she managed to pull off the rare double-hit on conservatives, trashing both Josh Hawley and Ted Cruz in one fell [foul?] swoop.

The subject matter was the Senate's passage of what is described as an anti-Asian hate crime bill. Republican Senator Josh Hawley of Missouri was the sole senator to vote 'no' on the bill, which passed by a vote of 94-1.

Among those voting for the bill was Ted Cruz. Which led Jordan to observe:

Josh Hawley [is] just going out of his way to really out-Cruz Ted Cruz, which is quite something.

And you just have to really work hard to try to be more loathed than Ted Cruz. But Josh Hawley seems to have decided that is his way and his glide path to the Republican nomination. 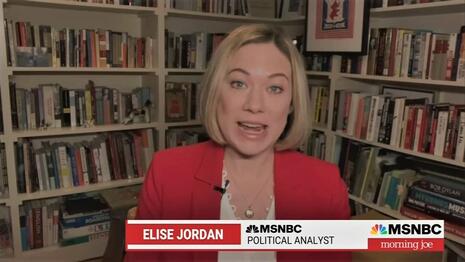 Even by her sarcastic standards, Jordan's nastiness was notable. Here, Ted Cruz had supported something that Jordan likes. But she still managed to work in a swipe at him as being singularly "loathed." Jordan then doubled down on bile by claiming that with his 'no' vote, Hawley has made himself even more loathed than Cruz.

Look for a little bonus in your next MSNBC paycheck, Elise!

We're not going to use the l-word with respect to Jordan. But to paraphrase her, let's say this:

"You have to really work hard to be more disdained by conservative Republicans than is 'MSNBC Republican' Elise Jordan. But Jordan seems to have decided that is her way, and her glide path to assure maximum liberal-media appearances."

"MSNBC Republican" Elise Jordan saying "you have to really work hard to try to be more loathed than Ted Cruz, but Josh Hawley seems to have decided that is his way," was sponsored in part by USAA, AT&T, USPS, and Comcast.

MIKA BRZEZINSKI: In a rare bipartisan vote, the Senate overwhelmingly passed the Covid-19 hate crimes act. The bill is aimed at curbing the rise in anti-Asian hate that has spiked since the start of the coronavirus pandemic, crimes against Asians. The Senate passed the bill in a sweeping 94-1 vote. The bill now heads to the House. Senator Mazie Hirono spoke about the importance of the legislation after the vote.

The lone senator to vote against the legislation was Republican Josh Hawley of Missouri. He explained his decision not to back the bill in a statement that reads, "It’s too broad. As a former prosecutor, my view is it’s dangerous to simply give the federal government open-ended authority to define a whole new class of federal hate crime incidents."

I guess I need to understand more what Josh Hawley is talking about. Matt [Lewis], can you explain what too broad at this point would mean? He was the only senator to vote against a bill, trying to stop Asian hate crimes. It seems like a no-brainer and 94 others felt that way.

MATT LEWIS: Right, Mika, I mean, to put it in context, Ted Cruz thought this was a good idea. What was persuaded to, ultimately, with amendments. Tom Cotton thought this was worth voting for. So these are pretty conservative Republicans who voted for it. Josh Hawley did not.

And I think, look, I think this has more to do with the fact that he is staking out, as kind of one man, nobody-to-the- right-of-me, turf. And this is not the first time that we’ve seen this happen in the case of some confirmations, where Josh Hawley is just staking out this pretty extreme territory.

And I guess the bet is that when he runs for president in 2024, one of these issues will be potent and he’ll invoke it, probably in a debate against Ted Cruz. But, yeah, he is a very lonely voice this morning.

ELISE JORDAN: Well I just want to second what Matt said about Josh Hawley just going out of his way to really out-Cruz Ted Cruz, which is quite something.

And you just have to really work hard to try to be more loathed than Ted Cruz. But Josh Hawley seems to have decided that is his way and his glide path to the Republican nomination.