Joe Scarborough: 'Bizarre' To Think Putin Would Beat Biden in a Debate 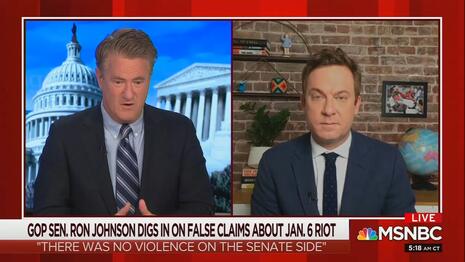 Joe Scarborough should show his NCAA bracket. If his prognostication skills there were anything like those on the prediction he put out Monday morning on a different subject, the bracket will look like a chicken tramped across it.

"People [on the right] this past week [were] actually bizarrely cheering for a Putin/Biden debate. And bizarrely saying that Biden would be wiped out by Putin."

So Scarborough thinks it's "bizarre" to imagine Putin would beat Biden in a debate?

Biden, the guy who has set a world record for ducking a first press conference? Who can't handle reading off a 50-point teleprompter? Who has Dr. Jill taking over when he loses the thread? Who repeatedly refers to Kamala as "President" Harris? That Biden?

I root for America, and would not want to see our country's president humiliated. But for Scarborough to scoff at the notion that Putin would best Biden in a joint meeting displays how it's now rally-around-the-flag time now that Democrats are in power.

The debate kerfuffle arose after Biden recently accused Putin of being a "killer," and the Russians responded by suggesting that Biden has lost some of his marbles and would be afraid to debate Putin. What should hurt Putin in a debate is that Russians aren't allowed to debate him or his rule.

What Trump fans are really saying is that Biden is weak on the world stage. See Donald Trump Jr. --

The whole world knows that we have no leadership at the top just an empty suit with a teleprompter (and he can’t even get that right).

They look at America’s weakness right now and are salivating.

To suggest that Putin could more than hold his own on stage with Biden should not be taken as support for the Russian. As I wrote last week:

This is by no means to let Putin off the hook. There's plenty of evidence that he is implicated in the death of his critics. Most recently, the Putin regime imprisoned under harsh conditions Russian dissident and opposition leader Alexei Navalny. This when Navalny returned to Russia after having been poisoned under suspicious circumstances.

Joe Scarborough suggesting it is "bizarre" to think that Putin would beat Biden in a debate was sponsored in part by Johnson & Johnson, maker of Aveeno, and Tractor Supply.

JOE SCARBOROUGH: Republicans--these anti-democratic forces that Anne [Applebaum, of The Atlantic] is talking about. And you could go through it, chapter and verse, over the past several years, you talk about Russian disinformation, but you actually have people on the far right who are — who are actually supportive of Vladimir Putin. I mean, there are polls you can Google right now that show how Vladimir Putin’s approval rating shot up in the Republican party, when Donald Trump was president. But you can also see during the Ukraine/Russia skirmishes, right-wing commentators, cheering against Ukraine. Cheering for Russia.

You see other people this past week actually bizarrely cheering for a Putin/Biden debate.

SCARBOROUGH: And bizarrely saying that Biden would be wiped out, wiped out, by Putin. Many of them are now puffing up Vladimir Putin in the same way that they’ve puffed up Donald Trump. It is bizarre!