Say, Professor Cooper: you and Mitt were in agreement!

Some people can't help but drag identity politics and racial/gender resentments into things, even when they and the person they're responding to are on the same page!

Take Brittney Cooper, on Jonathan Capehart's MSNBC show this morning. Capehart invited the Rutgers professor of Women's, Gender, and Africana Studies, and frequent MSNBC guest, to comment on a clip of Mitt Romney flatly declaring, "it's not going to happen."

That was Romney's response to reports that at a White House meeting on Friday, the possibility of invoking martial law was discussed, along with the possible appointment of Sidney Powell as a special counsel to investigate the election.

The first words from Cooper: "Look: it must be so nice to be a white man in America today."

But here's the thing, after warning that Trump "has the mentality of an abuser . . . who wants to leave us with scars," Cooper concluded: "I don't think he's going to avoid transition." 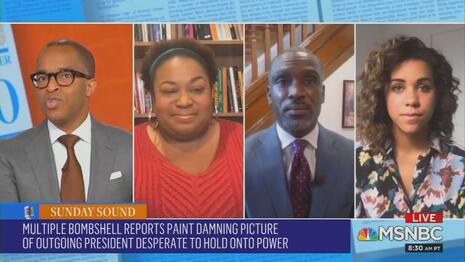 In other words, Cooper was agreeing with Romney!  But she still had to take a shot at his white-male privilege!

It must be sad to go through life seeing so much through a prism of grievance.

Brittney Cooper's attack on Mitt Romney's white-male privilege, even while agreeing with him, was sponsored in part by Dell and Fidelity.

JONATHAN CAPEHART: Have a listen to what Senator Mitt Romney had to say about, well, all of this.

And I understand the president is casting about, trying to find some way to have a different result than the one that was delivered by the American people.

But it is really sad in a lot of respects, and embarrassing. Because the president could right now be writing the last chapter of this administration with a victory lap with regards to the vaccine. After all, he pushed aggressively to get the vaccine developed and distributed. That's happening on a quick timeframe. He could be going out championing this extraordinary success. And instead, he's leaving Washington with a whole series of conspiracy theories and things that are so nutty and loopy that people are shaking their head, wondering what in the world has gotten into this man?

CAPEHART: Brittney Cooper, what do you make of all this, and do you share Senator Romney's certitude that this isn't going to happen: the martial law, the appointment of the special counsel, any of this?

BRITTNEY COOPER: Look, it must be so nice to be a white man in America today. To have this sort of certainty to say that, you know, that this man who has flirted with staging a coup wouldn't do it.

But I think the thing to remember about Trump is that he has the mentality of an abuser. And the most dangerous time with any relationship with an abuser is when you have decided to leave. The country has left Trump. They have left him in the dust. He lost by nearly eight million votes. Folks over this man. And so he wants to leave us with scars. And before he leaves, he wants us all to be feeling the fear, the anticipation that something really bad will happen. That is one of the reasons I so deeply resent him, because he can't leave gracefully. Instead, he wants everybody on edge as we deal with the possible threat in our moment of vulnerability of what he could do. And that's about everything we need to know about his lack of care for anyone but himself. His deep lack of empathy. His complete and total lack of patriotism.

So I think we have to be very vigilant. I think that part of the way that we got Donald Trump is we listened to people tell us that it could never happen.

And while I don't think that he is going to avoid transition, I do think that he is trying to create blows that we're going to have scars and wounds from for many years and potentially many decades to come. And so is the moment to stay we incredibly vigilant and watch every move he makes.