If the Democrats nominated Karl Marx, they'd describe him as a "moderate Marxist" . . .

It's SOP for the Democrats and the liberal media: they invariably try to peddle their presidential candidates as "moderates" or "centrists."

But the fact is that Joe Biden is the worst possible opponent for Donald Trump. Because he is not someone that Trump can paint easily as the other. That is what Trump wants to do. And Joe Biden, who is another septugenarian, culturally-conservative white guy, is just a very difficult opponent for Donald Trump to get a bead on. Which is why you have these kind of coded, unsubtle but not particularly effective kind of campaign events [reference to South Lawn event yesterday in which Trump warned Biden would destroy suburbs]. And we're going to see it I think going forward because they still don’t have a way of handling Joe Biden that the president feels comfortable with and you see it every time they do one of these events. This was another example.

When cultural conservatism is mentioned, the first issue that likely comes to mind for most people is that of abortion. And on abortion, Biden has "evolved" from being nominally pro-life to being ardently pro-abortion rights. In a debate during the primaries, Biden "touted his 100% rating from NARAL, which lobbies for abortion on demand."

And in a craven flip-flop, Biden last year went from his long-standing support of the Hyde Amendment to opposing it. That makes Biden in favor of federal funding of abortion. Biden has also announced that he would apply a pro-Roe v. Wade litmus test for Supreme Court appointees, would actually codify Roe v. Wade into federal law, and restore federal funding to Planned Parenthood. Culturally conservative? When it comes to abortion, it would be hard to stake out a more liberal position than the one Biden now holds.

And on every other issue of importance to cultural conservatives, Biden has firmly planted himself on the other side of the fence. Consider these ratings from a variety of groups: 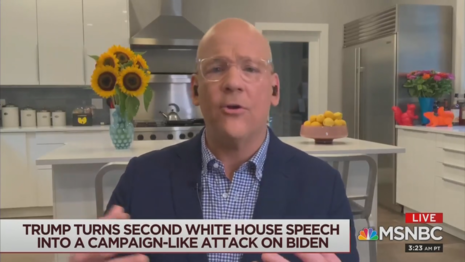 You get the point. Biden is a down-the-line liberal. But don't take our word for it. As the primary season was about to get underway, Biden boasted, "I have the most progressive record of anybody running for the ... anybody who would run." He has since declared that if elected, he would "transform the country."

And just last week, no less than Bernie Sanders predicted that if elected, Biden would be the "most progressive president" since FDR.

Heilemann's attempt to pass Biden off as "culturally conservative" is nothing less gross jounalistic malfeasance—fake news on steroids.