A Trio of Terrified Trump Haters Warns of Fascism, Election-Stealing 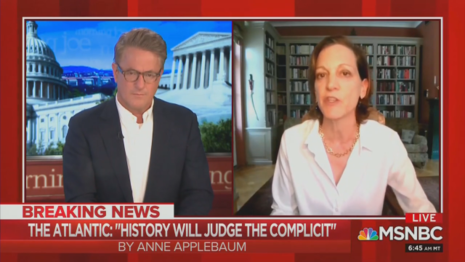 "Apocalypse Now" would have been a fitting title for this Morning Joe segment today. It featured three women painting a terrifying portrait of life under President Trump, and a prediction of further doom to come.

First up was Gail Helt, who claimed that by appearing at St. John's church with a Bible, President Trump was attempting to "conjure a divine image" like the North Korean despot Kim Jong-un. Poor Professor Helt proclaimed herself "unnerved" and "terrified," and her voice and demeanor did indeed reflect that.

Also finding President Trump's behavior "terrifying" was Russian-American journalist and activist Masha Gessen, who accused the president of conducting a "performance of fascism."

And then there was the doomsaying Anne Applebaum, whose article in The Atlantic bears the intimidating title, "History Will Judge the Complicit." She kvetched that Republicans are reluctant to revolt against President Trump, analogizing them to Nazi collaborators.

Applebaum suggested that the next move by President Trump and the Republicans would be an attempt to "steal" the election. She demanded to know whether Republicans would "value democracy in America enough to allow themselves to lose?" Once again, which party couldn't accept the results in the last election?

Applebaum did stop short of proposing that Trump and his "collaborators" should simply roll over and die.

GAIL HELT: But when I saw President Trump walk to the front of that church after he violently cleared protesters, standing there, holding up a Bible, it just reminded me of every, every image I've seen, for example, Kim Jong-Un standing on the top of Mount Paektu, or sitting on that white horse. And the imagery that it conjured — when Kim Jong-Un does that, it is to conjure a divine image. And that’s what it seemed like Donald Trump was doing. And that really, really unnerved me.

ANNE APPLEBAUM: They have been unwilling, a combination of desire to be close to power, fear of losing power themselves, desire to conform, fear of being embarrassed or attacked on Twitter. And sometimes using even a kind of Vichyite argument, which is that the other side is worse. In other words, we have to collaborate with Donald Trump no matter what he does because the left is so dangerous, and so negative, and so damaging to American life that we have to prevent it.

This is the kind of argument that has been used in occupied countries in the past. This is how when France was occupied by the Nazis, this is how Vichy, who were the Nazi collaborators in France, this is how they justified what they did: we have to collaborate with Germany because the alternative is so much worse.

WILLIE GEIST: What do you see in the streets of America over the last ten days, as someone who has studied autocracy abroad?

APPLEBAUM: What comes next is the attempt to steal an election. And what I hope all Americans will be focused on over the next several months, is will Trump and will the Republican party collaborate in an attempt to steal this election? Will they try to change the rules? Will they mess around with distance voting? Will they — you know, exacerbate the problems caused by the pandemic to prevent people from voting? That’s the thing that’s going to happen next.

And the real test for the Republican party is, will they, you know, do they value democracy in America enough to allow a real election to go through, and to allow themselves to lose?